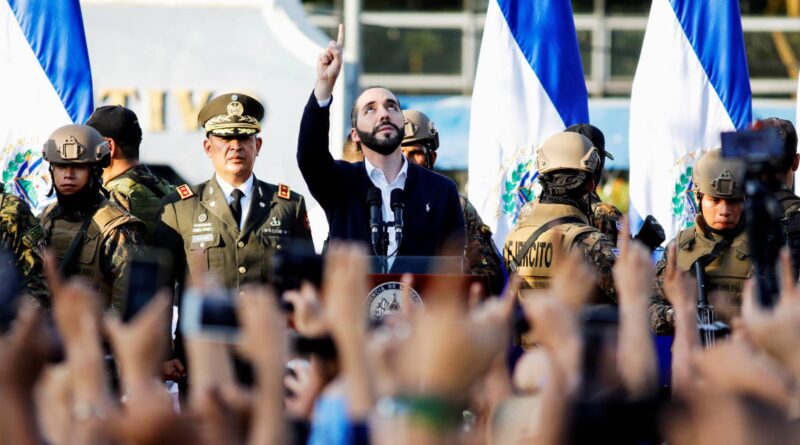 The overwhelming victory achieved by El Salvador’s President Nayib Bukele in last Sunday’s elections means that he will control an absolute majority in the Legislative Assembly and the majority of the country’s mayors’ offices. Although he entered politics and governed the capital on behalf of the former guerrilla Farabundo Martí National Liberation Front (FMLN), in his presidential term he has become a standard-bearer of neoliberalism, on a honeymoon with Trump, a political adventurer sick with personal ambition and ostensible authoritarian pretensions, a man with no ethics like the New York tycoon who recently left the White House. Nevertheless, he has a spectacular 71% popularity rating and has already swept the 2019 presidential elections, where he won 53 percent of the vote. In those elections, the candidate of ARENA, the traditional right-wing party, won 31.72 percent of the vote. But the FMLN candidate fared much worse, and after two consecutive periods of FMLN government, it received less than 15 percent of the vote. This fact showed the voters’ enormous dissatisfaction with the governmental management of the FMLN, an organization that since the armed struggle and after the peace accords, when it became a political party, had worthily defended the banners of the left in the country and gained important recognition among its counterparts in Latin America and the Caribbean. Its prestigious and enlightened leader, Schafik Handal, who died in 2006, became one of the most prominent left-wing leaders in our region.

RELATED CONTENT: El Salvador: The Ways of a Dictator

But if the result obtained by the former guerrillas in the 2019 presidential election was starvation, in last Sunday’s election they almost disappeared as an electoral option, and this means that they can no longer postpone a profound and painful examination of conscience, fraternally accompanied by their peers in the region. With all due respect, many things must have been done wrong and many shortcomings must have existed in the work of the FMLN, especially in the 10 years it was governing, to reach a situation in which many of its militants and sympathizers have voted for Bukele’s parties, the option most representative of the interests of US imperialism and neoliberalism in the Central American country, now that ARENA is fading away. Bukele is an ephemeral product of the abysmal crisis of the political party system associated with the perpetuation of neoliberalism, which we observe today in the world and particularly in Latin America and the Caribbean. Democracy is increasingly incompatible with neoliberalism.

With the correlation of forces that 66 percent of the votes will give him in the legislature, Bukele can pass, without negotiating with other parties, any legislation in his interest, appoint a third of the Supreme Court judges, the Attorney General, the members of the Court of Auditors and even modify the Constitution, including the extension of presidential mandates to more than one. More than one observer has said in recent days that Sunday’s vote is tantamount to electing a dictatorship by popular vote. Even without the extraordinary powers he will now have at his disposal and without parliamentary representation.

The chief executive has refused to disclose how he has spent an IMF loan requested to deal with the pandemic, has not handed over the funds for municipal governments, and stormed into the Legislative Assembly, escorted by soldiers and police, to demand the approval of an additional budget for his security plans. Some of the funds earmarked for the pandemic are said to have been illegally distributed during the election campaign to his supporters in the form of handouts and bonuses by Nuevas Ideas and Gana, the president’s parties. The president has instigated a hate campaign against the opposition, especially the FMLN, two of whose supporters were killed in the middle of the capital a few days ago by security forces.

Bukele has over-indebted the country and will face a very difficult economic and social situation. Meanwhile, the IMF will demand cuts in social investment when the country needs it most. It will not be easy for him if the FMLN were to carry out a profound self-criticism and go out and elaborate a radical opposition program with popular organizations. Neoliberalism is now unsustainable and has a very limited lifespan, as Argentina and Bolivia have shown. Although Bukele is very skilled, as we have seen, in the elaboration of tailor-made messages for the different sectors and adept at publicity and networks, the harsh reality will sooner rather than later point the people in the right direction as long as they have a dedicated leadership committed to their interests.