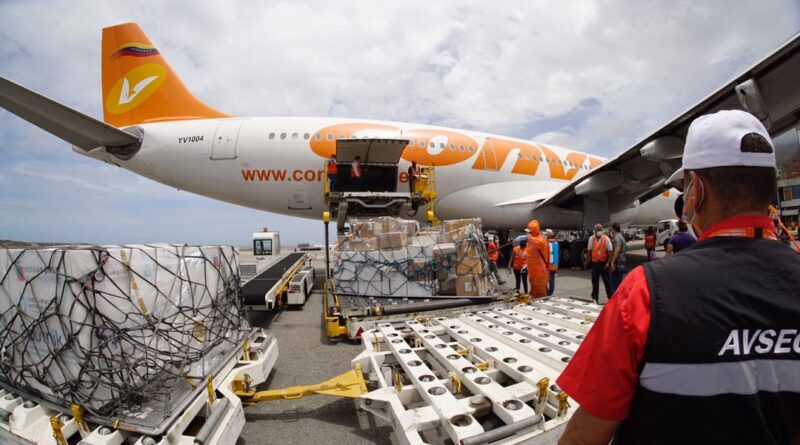 This Sunday, March 6, the second batch of the Russian Sputnik-V vaccine with 100,000 doses arrived at the Simón Bolívar International Airport in La Guaira state, to complete the immunization of the first 100,000 persons in the country. The first 100,000 doses had arrived three weeks ago, on February 15.

This is the second flight with COVID-19 vaccines to arrive this week, after the arrival of 500,000 doses of the vaccine Sinopharm from China.

“We are happy to be here delivering this second shipment of the Russian vaccine,” said Sergey Melik-Bagdasarov, Russian ambassador to Venezuela. “It is a pride for us that today President Nicolás Maduro has taken the first dose. Our countries have extraordinary relationships that will continue to deepen,” added the Russian diplomat.

The first flight from the Russian capital arrived on February 15 with 100,000 doses, and vaccination of health personnel started on February 18 with those doses.

RELATED CONTENT: Make the Comparison: COVID-19 Fatality in Venezuela vs. Other Countries

“The second shipment has arrived. There are 100,000 more doses,” said the Venezuelan Minister for Health, Carlos Alvarado, who was present at the airport to receive the shipment. “We have already applied 80 thousand doses to our health personnel. We already have 700,000 doses, 200,000 Russian and 500,000 Chinese, but more will continue to arrive so that 70% of the population can be vaccinated,” the minister informed.

Venezuela has prioritized to guarantee immunization of front-line health personnel so that they continue to save lives.

“On Monday vaccination will begin with 500,000 doses of the Chinese vaccine, starting with 100,000 teachers and 100,000 medical brigade members who go on house-to-house check-ups,” added Minister Alvarado.

The same day that President Nicolás Maduro got the first dose of the Sputnik-V vaccine, Venezuela received more vaccines from Russia.

This second shipment came in the same week that the first cases of the new Brazilian variant were confirmed on Venezuelan soil, which is about 1.4 – 2.2 times more contagious.

Several countries have already confirmed that Sputnik-V is effective in providing immunization and neutralizing the effects of the Manaus [Brazilian] strain of the coronavirus.

“We are doing a study in Venezuela to see if it works against the new Brazilian variant. It has already been proven in other countries,” the minister for health informed.

Venezuelan Minister for Foreign Affairs, Jorge Arreaza, praised the bilateral relations between Venezuela and Russia which made this vaccination program possible.

“A week and a day ago, President Nicolás Maduro spoke with the Russian President Vladimir Putin,” said Arreaza. “We have huge investments with Russia that are fundamental for our country. Russia and China have become very important powers in today’s world. Not hegemonic powers that hoard vaccines like Canada, but ones that help all of humanity in the midst of the worst times.”

Arreaza welcomed the initiative of the emerging powers as humanity is eager for solidarity and mutual support.

“They are not imposing a hegemony like the United States,” continued the Venezuelan diplomat. “Russia has emerged as a great power to help the peoples of the world…Millions of lives will be saved thanks to Russia and China who are placing their science at the service of all.”

Venezuela courageously continues in its path towards the post-pandemic world in the midst of the most brutal economic aggression with unilateral sanctions and blockades imposed by imperialist powers and their allies.