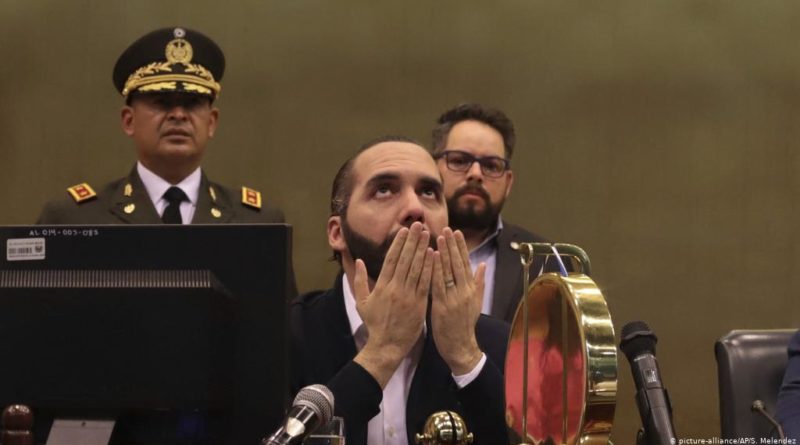 The delirious spectacle of President Nayib Bukele, which on Sunday usurped the seat of the president of the Assembly and threatened to dissolve that body, surrounded by heavily armed military and riot police with shotguns at the ready, and delegitimizing the role of the Constitutional Chamber, is the lowest moment that Salvadoran democracy has lived in three decades.

Bukele and his cabinet had already instrumentalized the Armed Forces and the National Civil Police in recent months to the point of degradation, but the military occupation of the Blue Hall this Sunday refers us to dictatorial prints and an army we thought we had left behind. The images of soldiers in battle fatigues, with bulletproof vests, helmets and long weapons inside the legislative session hall are embarrassing and will not be easily forgotten.

If we add to that the messianic populism taken to the extreme – during his eruption in the Assembly the president closed his eyes and covered his face, to later tell his followers that he had spoken with God and it was he who recommended him not to consummate the autocoup -, the day sows serious doubts about the maturity and ability of Nayib Bukele to govern.

His act of populist bullying is a very serious attack on all the democratic institutions that have cost so much to build in El Salvador. If the president does not know it, he is incapable; if he does not mind, a threat to the country.

Bukele almost set fire to everything. And he probably would have done so if foreign governments, trade unions and national and international organizations had not intervened to let him know he was putting El Salvador on the edge of the precipice.

Maybe it’s what he was looking for. The deputies confirmed on Saturday that on Monday they would discuss the loan that the president demands to finance Phase III of his security program. A ruler and a cabinet with real interest in the country or in the loan would have waited a few hours. But Bukele and his work team believed it profitable to represent the image of the strong president armed with his troops, who harangues crowds against his opponents and is in direct communication with a supreme being. They decided that it was political audacity to put a gun to the heads of lawmakers. Literally.

Under these conditions it is not possible to discuss the viability of a loan. The presidential commissioner of cabinet operations, Carolina Recinos, affirms that this confrontation between the Executive and the Legislative is normal. No, it is not, nor can it be normalized. Not when the Executive orders security forces to loiter before the homes of opposition deputies. Not when it is presumed to have the power – weapons – to dissolve Congress. Not when the deputies are given a week to vote in favor of a law, under threat of a popular insurrection.

Under these conditions it is difficult to guarantee that the deputies will be free to vote. Under these conditions, the deputies have a unique dignified path: refusing the blackmail and discussing, instead, the violation of their premises carried out by another State power and the army. Voting for the loan, like this, now, would be to yield to the threat, to pretend that something as serious as what has happened has not happened and sets a dangerous precedent. Only a political dialogue that includes Bukele’s renounciation of threats can open the way to a new legislative normality.

A crisis of institutions

The Salvadorans, who thought we were safe from the caudillo’s adventures that some of our neighbors in the region live, have discovered that unfortunately we suffer the same cancer.

This crisis, built piece by piece by Bukele, bares the truths of our national life. After several deeply corrupt governments, at a time when the agreements between the main political parties and the gangs are aired in court, our political system has lost credibility and a total renewal is urgent.

The president has turned the population’s understandable thirst for novelty into a platform for his personalized project. In just eight months, the enormous popularity of his displays are the reliable proof of of our dangerous institutional weakness. But his style of government is the fruit of the rotten system and a fundamental part of the problem, not its solution. Democracy needs to be strengthened, not dynamited as Bukele is doing.

It is painful to discover that we have not escaped the nightmare of the armed threat to impose political decisions and threaten opponents and critics. That the heads of the Armed Forces and the National Civil Police have lent themselves to the president’s perverse spectacle sets a new precedent and forces us to remind them again that we do not want them, ever again, intervening in politics – not even when ordered by their Commander in Chief.

The performance of the Army and the PNC during the weekend deserves only repudiation. Hopefully the officers committed to their uniform and democracy, that still exist in both bodies, will demand rectification, restraint and wisdom, especially in the difficult weeks ahead for the country. It is not only for the good of the nation, but for that of their own institutions.

Nor has the Supreme Court of Justice, and in particular its Constitutional Chamber, been on top of the crisis. Its silence, due to cowardice or disability, is criminal and gave wings to a president who attributes to himself the right to interpret the Constitution and tries to use it as a guillotine. The magistrates were called to intervene and reclaim their independence and relevance. Their voice will be late, but their silence, if prolonged, can condemn them to the inconsequence that Bukele himself attributes to them when he says in front of the masses that he does not need the Constitutional Chamber to interpret the constitutional articles with which he defends his blackmail of the legislature and the call to insurgency.

With the military takeover of the Assembly, Nayib Bukele dispelled the last remaining doubts about his nature: he is effective, populist, undemocratic and authoritarian. With the cheapest, repudiable and dangerous trick, that of claiming that God is on his side, he has opened one of the black pages in the history of our incipient democracy. The country is injured; but the darkest spot is that which will accompany the president in the remaining years of his mandate and throughout history.

It makes no sense to expect too much reflection or an about face from him. A ruler capable of what happened this Sunday can only be set limits and greater counterweights.

The defense of our democracy does not pass through the seas of the masses that the president himself summons, organizes and in which he then demagogically deposits the initiative to insurrection. No. It passes through an organized civil society that responds, from the commitment to democratic principles, that presses to continue the fight against corruption and increased respect for the rule of law. It happens when the remaining powers pronounce themselves and act in defense of institutionality. It moves through a vigilant international community. It goes through a deep reflection and review of all political forces, which need an internal purge and regenerate in search of some legitimacy. It goes through a collective commitment to strengthen pluralism.

And it happens, also, because the members of his cabinet examine whether it is worth continuing to accompany a project based on the cult of the figure of a man ignorant of our collective memory and with no sense of political responsibility. Giving all the powers to a single person, or allowing him to monopolize them, is the perfect formula for disaster. History has enough examples. It is enough.

Featured image: President Bukele demonstratively prayed while he occupied the speaker’s chair in Congress. According to German news agency DW