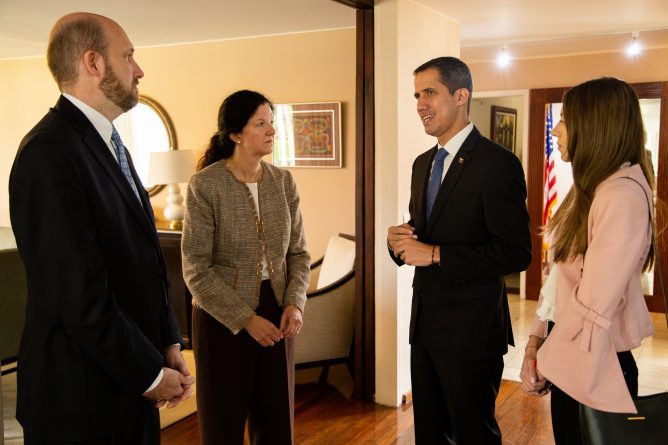 His advisor is Kimberly Breier, a 20-year-experienced U.S. intelligence professional.

Since leaving Venezuela on Feb. 22, despite a travel-ban in place against him, opposition lawmaker Juan Guaido has deployed an intense agenda of attacking democratically elected President Nicolas Maduro as he travels to Colombia, Brazil, Paraguay, and other South American countries, whose right-wing leaders were quick to throw their support behind his self-proclamation as interim president.

Today in Brazil I reiterated @SecPompeo and U.S. support for @jguaido as he leads his country back to democracy. The people of #Venezuela deserve nothing less. #EstamosUnidosVE pic.twitter.com/hZSPIamrot

Besides traveling with his wife Fabiana Rosales, who has accompanied him on each visit as if they were performing official trips, Guaido has been accompanied by another woman: U.S. senior official Kimberly Breier.

A brief look at her social media posts reveals how Breier constantly her close presence and collaboration with Guaido to achieve his political objectives of ousting the legitimate government in Venezuela, in line with the interests of her superiors in Washington.

RELATED CONTENT: Guaidó, a “President” Without Territory, Without Army and With a Bitter Taste of Defeat

On Mar. 5, 2018, President Donald Trump presented Breier as a “key addition” to his staff, appointing her as Assistant Secretary in the Bureau of Western Hemisphere Affairs.

She earned a B.A. in Spanish from Middlebury College and a M.A. in Latin American Studies from Georgetown University, an institution some claim to be known for training future Central Intelligence Agency (CIA) employees.

According to information available at the U.S. State Department, where she served as a member of the Western Hemisphere Policy Planning Staff, Breier is “an intelligence professional with more than 20 years of experience in foreign policy”, mostly focused on Latin American issues.

Previously, at the Center for Strategic and International Studies (CSIS), she headed the Americas Program and the U.S.-Mexico Futures Initiative, a program that deals with bilateral U.S.-Mexico issues such as trade agreement renegotiation, border security, and immigration.

Breier was also Director of the National Policy Association’s North American Committee, which is a business committee with members from the United States, Canada and Mexico.

Watch grandson of overthrown Chilean president explain why the US is pushing a coup in Venezuela https://t.co/EZ1eYKjcsc

Among other private sector and think tank experiences, she was president of a consulting firm, which provided “country risk assessment teams” for clients located in Mexico, Argentina, and Chile.

From January 2005 to June 2006, during President George W. Bush Administration, Breier served as Director for Brazil and the Southern Cone, Director for Mexico and Canada, and interim Director for the Andean region.

Needless to say, this Massachusetts-native diplomat speaks Spanish fluently and has traveled extensively through Latin America.