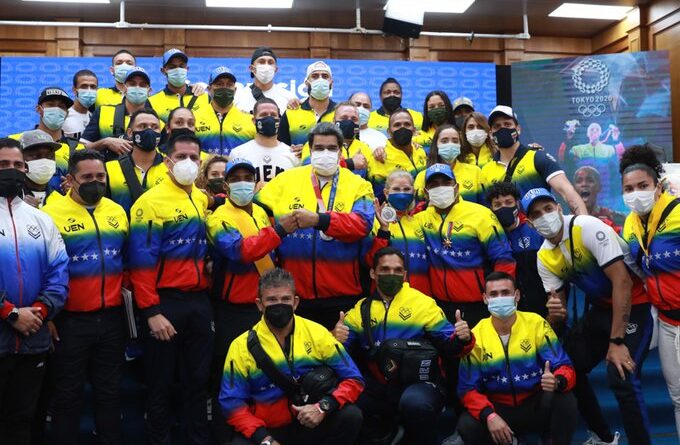 On Tuesday, August 10, the President of Venezuela, Nicolás Maduro, asked Executive Vice President Delcy Rodríguez to call athletes, coaches and sports glories from all parts of Venezuela to hold discussions and present, in a period of no more than 15 days, the Plan Olympic Dream Paris 2024. He  also announced that in December the National Sports Games will be resumed.

“Within a period of 30 days we should know who are the Olympic promises heading to Paris 2024, and give them all the psychological, financial, training, technical, logistical and scientific support,” announced the president.

At a meeting held in the Ayacucho Room of the Miraflores Palace in Caracas, President Maduro highlighted that despite the pandemic and the sanctions, Venezuelan athletes arrived in Tokyo. “They competed, and they have come with the best result for Venezuela in the history of the Olympic Games,” he said.

Maduro received the athletes who participated in the Tokyo 2020 Olympic Games at the presidential palace and congratulated them for their participation. He also thanked the sports authorities and the athletes’ families.

Through a heartfelt tribute, the president thanked the athletes for their participation in the Games and presented them titles and national orders.

Keydomar Vallenilla, Glaudimar Garcéz and Julio Mayora were the first to receive the Francisco de Miranda Order, while the head of state received from the Venezuelan Olympic delegation the signed national flag.

RELATED CONTENT: The Olympic Medals of a ‘Failed State’

Youth and Sports Minister Mervin Maldonado expressed that the participation of Venezuelan athletes was impeccable. “We have been participating in the Olympic games for 73 years,” he said. “In 2016 we had the best result so far, with two silver medals, and from there the route to Tokyo started. Today we see the results.”

He continued, “43 athletes participated in 18 disciplines, accompanied by 28 coaches. In addition to the technical team and doctors, 114 people were there to tend to the needs of the athletes. Our sportspersons participated in 13 days of the competition, and today they have the honor of saying that this has been the best performance in history.”

Maldonado reiterated that the route to Paris 2024 has already started, and his ministry has taken up the challenges to further promote sport in the country. “We have had the best performance of Venezuela in the Olympic Games, with a gold medal, three silver medals, six Olympic diplomas, one world record, one Olympic record and five national records,” said the minister.

Mayora, Olympic silver medalist, thanked the support of the national government and the federations in his training, while Vallenilla assured that this triumph should be an example for the generation of athletes who are trained in the country.

The president suggested three ways for massive promotion of sports in the country:

He added that it is necessary to fix and improve the country’s sports facilities, give international support to Venezuelan coaches, and start a special scholarship and social assistance plan for all athletes in the country. He also stressed that it is essential to create a specialized system to look for sports talent in all parts of the country.

He announced that, in December this year, the National Sports Games, which have been suspended since 2013, will resume. The sporting event will be held in the Capital District and the states of Miranda and La Guaira, and will be held every two years.