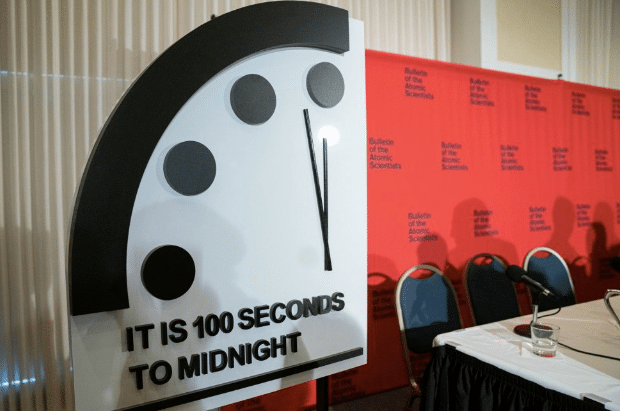 The Bulletin of the Atomic Scientists emerged after World War II as a voice for peace by some of the scientists who developed the then ultimate weapon of mass destruction. Now, its mission has drifted into being an echo chamber for the US imperial project urging President Biden to take even more destabilizing actions against Russia.

Dropping the A-bombs
By the time that the scientists at the top-secret Manhattan Project had developed the atomic bomb and the US military had worked out the logistics for deploying it, World War II was for all intents and purposes over. By early May 1945, Germany had unconditionally surrendered; in large part due to the efforts of the Red Army defeating the Nazi Wehrmacht, but at the horrific cost of 27,000,000 Soviet lives. The Japanese too had been defeated militarily and had agreed to “unconditional surrender” with the one caveat that Emperor Hirohito be spared.

So, the world’s emerging hegemon had a problem. It had the ultimate weapon to impose its policy of world domination (i.e., today’s official US national security doctrine of global “full spectrum dominance”). But what good is this ultimate weapon if it is a secret? And, even if known, would the world believe that the US has the will to unleash such a destructive force?

President Truman had the solution – nuke Japan. All the military targets in Japan had been destroyed, but an even stronger message of the US’s determination to enforce imperial hegemony was made by annihilating the civilian cities of Hiroshima and Nagasaki in August 1945.

The Japanese promptly surrendered, offering up the life of their emperor. The US accepted, but did not execute the emperor, who was more useful alive than dead. Besides, the leniency gesture reinforced the message that the US would capriciously bomb at will. Even when President Obama visited Hiroshima in 2016, he pointedly offered “no apology” for the destruction his country had wrought.

Dawn of the Cold War
The quick Japanese surrender in August 1945 had another cause, which many modern historians consider more overriding than the US bombs. The Soviets, engaged with their western front, had remained neutral in the war with Japan, but had promised the Allies to join the war effort against Japan once the Germans were defeated. At the same time the US dropped the bombs, the USSR declared war with Japan causing Tokyo to capitulate.

The dropping of the atomic bombs was the first salvo of the Cold War, signifying the end of the US wartime alliance of convenience with the Soviet Union. Truman’s rush to nuke Japan had the dual advantage of making known his “hammer” over the Kremlin as well as denying the USSR time to advance east and have a seat in the surrender agreement with Japan. The Soviets had not developed atomic weapons on the assumption – which proved to be essentially correct – that World War II would be over before they could be deployed to defeat the Axis powers.

In the immediate post-war period, the Soviets and their allies were existentially threatened by the unambiguous intention of the US and its allies to destroy them. As a defensive measure, the Soviet Union had no choice but to develop a deterrent nuclear force, testing its first atomic bomb in 1949.

Although the Soviets pledged to use their nuclear arsenal only in defense and renounced “first strike,” the US didn’t. Soon the Cold War arms race threatened the planet with destruction. The emergent construct of MAD (Mutually Assured Destruction) was a fragile arrangement for the future of humanity.

Emergence of the Bulletin by scientists for peace
Voices of peace arose from the very inventers of the atomic bomb. Immediately after the destructive power of the atom was rained on Japan and even before the Soviet Union developed their deterrent force, former Manhattan Project scientists Eugene Rabinowitch and Hyman Goldsmith founded the Educational Foundation for Nuclear Science, subsequently renamed the Bulletin of the Atomic Scientists.

The Bulletin’s Doomsday Clock, unveiled in 1947, was set at seven minutes to midnight. The clock was intended as an educational tool to serve “as a vivid symbol of these multiplying perils, its hands showing how close to extinction we are.”

The Pugwash Conferences, an effort at peace in the early part of the Cold War, were an outgrowth of the Bulletin in its formative years in the 1950s.

Mission drift at the Bulletin of the Atomic Scientists
Today, the risk of nuclear annihilation, not to mention global warming and other threats, has never been greater, according to the Bulletin’s Doomsday Clock. But the Bulletin has morphed from an advocate for peace and against other threats to humanity to something else.

From an organization run by scientists, the current governing board of the Bulletin has hardly a scientist in sight. Its president and CEO is Rachel Bronson, a political scientist who came out of the US security establishment NGO world, including the Council on Foreign Relations (Wall Street’s think tank) and the Center for Strategic and International Studies (ranked the top military think tank in the world). Its chair, David Kuhlman, is a corporate consultant specializing in helping “clients identify pathways to profitable growth.” Its secretary, Steve Ramsey, formerly worked for defense contractor General Electric. Former Secretary of State and accused war criminal Madeleine Albright does promotionals for the Bulletin.

The Bulletin maintains a liberal façade and still publishes articles that contribute to peace and environmentalism. In that way, its role in collusion with the US imperial project is insidious, because the patina of peace is used to legitimize its mission drift.

Fanning the flames of anti-Chinese sentiment, the Bulletin promotes the conspiracy theory that the Chinese artificially developed COVID-19, featuring journalist Nicholas Wade’s “How COVID-19’s origins were obscured, by the East and the West.” However, scientific evidence points to natural origins of the virus. Anti-Russian sentiment is promoted with journalist Matt Field’s “Russian media spreading disinformation about US bioweapons as troops mass near Ukraine.” Where are the scientists advocating for peace?

The Bulletin covers the Ukraine crisis
Another case in point of its devolution is the article “How to mix sanctions and diplomacy to avert disaster in Ukraine,” published in the Bulletin on February 1. The article advocates for sanctions that would “severely and quickly devastate Russia’s powerful energy export sector.” Echoing Washington’s talking points, the article couches its recommendations as responding to Russian aggression but actually proposes nothing to de-escalate the conflict.

It is beyond ironic that an organization that purports to be warning against the dangers of nuclear holocaust is making a full-throated defense of an even more aggressive posture by one of the world’s leading nuclear powers.

Yes, the Bulletin of the Atomic Scientists Doomsday Clock is now 100 seconds to midnight, and they are trying to push it closer to Armageddon.

The view of the Bulletin’s Ukraine article is that the current crisis is Putin’s “own making.” In contrast, the article explains that the US has diplomatically “initiated” talks with Russia. There is no mention of the forward deployment of US troops or sending lethal aid to Ukraine. There is no recognition of aggressive actions by NATO such as stationing assault ABM missile systems in Romania and possibly Poland. Off limits is allusion to the US shredding the Intermediate-Range Nuclear Forces Treaty.

Hidden from sight in the aforementioned article and another published the same day on “How the demise of an arms control treaty foreshadowed Russia’s aggression against Ukraine” is the US-orchestrated Ukraine coup in 2014 that installed an anti-Russian regime there. The latter article’s meticulously detailed history of the region notes “Moscow invaded and annexed the Ukrainian territory of Crimea,” but not the coup that precipitated it.

RELATED CONTENT: ‘Do You Want a War Between Russia and NATO?’

The above peace measures are what in fact Russia proposed, but are considered “non-starters” by the US and presumably by the Bulletin.

Citing the Atlantic Council, the US-based think tank for NATO, the Bulletin explains that the sanctions that they are advocating would cause the Russian economy to “experience significant chaos.” These sanctions that the Bulletin calls for are a form of warfare just as deadly as dropping bombs. Sanctions kill! Instead of supporting peaceful measures to reduce tensions in the Ukraine, the Bulletin of the Atomic Scientists has become a cheerleader for Washington.

Featured image: The Doomsday Clock is seen at the National Press Club following a panel discussion in Washington, D.C. on January 23, 2020. File Photo by Ken Cedeno/UPI.