Chileans burning the few belongings of Venezuelan migrants and launching a baby stroller to the fire. Photo courtesy of Twitter.

This Saturday, September 26, a new episode of xenophobic violence occurred in Chile, in the midst of a protest against migrants, mostly of Venezuelan nationality, whose clothes, mattresses, baby strollers, toys and tents were burned.

It is estimated that about 3,000 Chileans participated in the xenophobic protest in the city of Iquique, capital of the northern province of Iquique. The city, a coastal town with resorts and spas on the coast of the Pacific ocean, is a popular tourist destination. They reoccupied .

The protesters occupied a square where undocumented and homeless people live, and the events turned violent as about 150 police officers carried out eviction measures in the vicinity of Plaza Brasil.

“It was at 6 in the morning, the officers arrived to evict us from our tents, with the children, in the cold,” a Venezuelan mother described the events of Saturday. “We had to wake them up and carry them out because they were there to evict us and began to knock down our tents,” said a when describing what happened on Saturday, September 25. 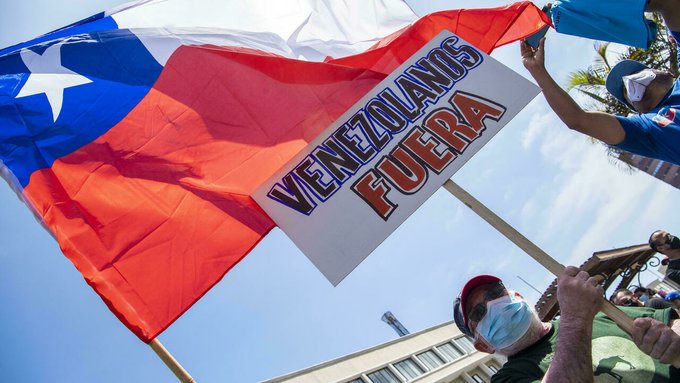 In images that circulated in media and social media platforms, children could be seen collecting blankets, toys, pets and other belongings amid the destruction caused by the police. According to reports, 5 people were arrested, and a few were injured, including a police officer.

Piñera’s responsibility
During the eviction operation, the security forces expelled the migrants from the place where they were camping, but provided no indication or guidance about the steps they must follow to regularize their stay or where to go.

The violent events of this weekend in Iquique revived the memory of President Sebastián Piñera’s words on February 23, 2019 in Cúcuta, a Colombian town close to the border with Venezuela, where the Guaidó-led opposition, backed by the governments of Colombia and Chile, tried to forcefully push into Venezuela fake humanitarian aid in an act of political destabilization.

At that time, Piñera had condemned the government of Nicolás Maduro and offered his absolute support to the Venezuelan migrants, and his words led many to decide to undertake the trip to Chile, where supposedly they were to find facilities to legally establish themselves in that country.

According to official figures, in the first half of 2021, more than 23,000 people entered Chilean territory illegally, crossing the Bolivian border. Along this route, Iquique is the first big city where the migrants stay, before continuing their journey to other destinations.

Since 2016 right-wing governments in a number of Latin American countries, especially Colombia, Chile, Peru and Ecuador, promoted a massive migration spree from Venezuela, promising help and fast regularization of their immigration status. The objective was to exploit the Venezuelan “humanitarian crisis” campaign as one of the vertices against the government of Nicolás Maduro, as well as to claim US and European donations to allegedly “help” Venezuelan migrants.

Vuelta a la Patria reactivated
On Sunday, September 26, the President of Venezuela, Nicolás Maduro, declared that the Vuelta a la Patria [Return to the Homeland] Plan will be activated in Chile, to guarantee the return of Venezuelans who have been victims of acts of xenophobia and violence in that nation.

This was reported by Executive Vice President Delcy Rodríguez, through a message posted on her Twitter account, where she expressed the repudiation by the Venezuelan government of the recent attacks perpetrated against a group of Venezuelan immigrants.

“Venezuela repudiates xenophobia and attacks against Venezuelan migrants and demands that the national and local authorities of Chile respect the physical and psychological integrity of our fellow citizens,” she stressed, adding a video of the incident to her post.

Featured image: Chileans burning the belongings of Venezuelan migrants and throwing a baby stroller in the fire. Photo: Twitter