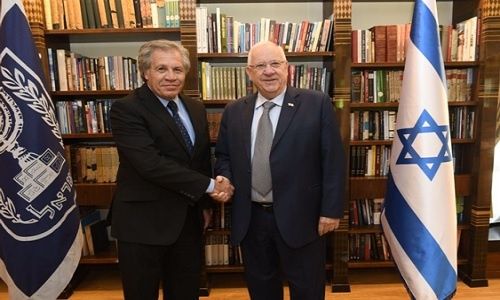 The policy of “public diplomacy” that the Zionist government has ordered, as part of the process of cleaning up the image of its regime, implies buying support from international organizations, governments, parliamentarians, and opinion leaders.

These are usually well rewarded for this shameless support in favor of an entity that commits war crimes and crimes against humanity. In this context and as part of his political conversion process from progressivism and solidarity with the peoples, the Secretary General of the Organization of American States (OAS), the Uruguayan Luis Almagro, completes his conversion process and becomes a yanacona by joining Zionism in Latin America, to misinform, manipulate and lead a political war against the resistance movements to that policy on the continent and also in Western Asia, which fight Zionism and its policy of colonization and occupation of Palestine. This, in addition to its destabilizing actions and aggressions against Lebanon, Syria, Iraq, Iran and its support to the Saudi monarchy in its crimes against the people of Yemen. (1)

On April 25 of this year 2021, in a virtual meeting held with the ambassadors of the Israeli regime in Latin America, the aforementioned Secretary General of the OAS returned to fantasy narratives of Zionism and its rhetoric regarding the presence of the Islamic Resistance Movement of Lebanon (Hezbollah) in the territories of our continent.

Almagro, in order to satisfy his interlocutors, once again revived and rekindled the anti-Resistance Movement fires by repeating the events of the AMIA and the Zionist embassy in Buenos Aires. To bring up this issue again, which has served for the persecution of the Lebanese community in Argentina, the manipulation and disinformation of the Argentine print and television media, is to continue with this refrain, which does not hold water.

The Israeli society, that minority part which usually expresses its rejection of the Zionist policy, which is aware of the criminal and corrupt conduct of its governments, must demand that justice (if it has any representative who can exercise it) focus its investigations on the Mossad’s offices and its links with other destabilizing agencies, or with the countries where it operates, and there is no doubt that the classic Zionist specialty will come to light: the false-flag attack.

And regarding Hezbollah, the ambassadors of the Israeli regime in our Latin American countries should warn Almagro that the way to confront the resistance is not like in the past. In the campaign against this resistance movement, Zionism has taken good note that it cannot continue to provoke it. Keep in mind that the Hezbollah forces have given the Israeli occupying army two major defeats of its aggressive efforts. First, in 2000, when it succeeded in expelling the Zionist military forces occupying southern Lebanon, and in 2006 in the 33-day war, which meant the end of the myth of the invincibility of the troops, equipment, and military power of the infanticidal entity, with Israel rushing to take refuge behind the dividing line between Lebanon and historic occupied Palestine, shouting from the rooftops for the UN to intervene to facilitate a ceasefire.

Surely the converted OAS Secretary General is unaware of this situation and his advisors have a duty to either shut him up or simply point out to him that his pro-Zionist verbiage makes him an accomplice of an entity indicted before the International Criminal Court for war crimes and crimes against humanity, and recently criticized for apartheid crimes by Human Rights Watch.

Almagro the convert
Yesterday pro-Palestine, today pro-Zionist, Luis Almagro, once a member of the so-called progressive sector in Latin America, has today become the coordinator of every destabilization process against Nicaragua, Venezuela, Bolivia, or Cuba. He signs off on everything that is a call to unleash a coup on our continent.

Former member of the Uruguayan Frente Amplio, a character who since his election as Secretary General of the OAS has become Washington’s coup-plotting coryphaeus in Latin America, focusing his attacks against Venezuela, in alliance with the Colombian narco-state; coordinating the ultra-right wing Lima Group, and with it all the links that those governments have established with Israel in terms of arms sales, advice in the repression of social movements, paramilitary training, and everything that Zionism sells as if it was candy at the corner kiosk.

In the virtual meeting I have mentioned, the diplomatic representatives of the Israeli regime did not remind Almagro, the convert, that only a decade ago, when he held the position of Foreign Minister in the government of former Uruguayan President José Mujica, in April 2012, he expressed himself strongly in the Hebrew Weekly media against the crimes committed by his current friends. In that interview Almagro reaffirmed and explained Uruguay’s position before the United Nations Human Rights Council, where an investigation was approved in the case of the Zionist settlements in the West Bank and their impact on the human rights of the Palestinian people. (2)

On that occasion, the former foreign minister stated that the case of Israel has “specificities that justify Uruguay’s position. There is a particularity in the case of Israel-Palestine. There is a country that Israel does not recognize as a country, that does not act as its peer, there is a political definition of Israel to maintain its political dominance over Palestine. That is obviously what gives this case in political terms practically unique specificities. There is a country that is oppressed. That is a political reality that is very difficult to ignore when making resolutions. Israel occupies another territory, this violation of human rights is against the population of another country, there is a will to politically subjugate another country. So one sees the violation of human and political rights in its maximum expression.”

That Almagro, five years later, already as Secretary General of the OAS, visited the historic occupied Palestine, which Zionism calls Israel, and said, “Israel represents an incredible example of a people overcoming extraordinary difficulties to build a prosperous and vibrant society rooted in the principles of freedom and democracy.” When it comes to exemplifying a convert, Almagro is the perfect figure and example.

Almagro’s past is of no interest to Zionism since he is now what is called “a useful idiot,” a character who is favorable to its policy of infiltration in Latin America, a character that acquired the curse of malinche and is infected with the Sion 48 virus. An Almagro who received affectionate pats, one of them from the representative of the Israeli Foreign Ministry for Latin America, Modi Ephraim, who highlighted the agreement with the countries of Latin America and the Caribbean to combat the presence of Hezbollah and all expressions of anti-Semitism (in truth, there was no agreement whatsoever since Almagro does not represent the Latin American governments, a more than evident sign of how sibylline Zionism is to express what was discussed and the conclusions of its conspiratorial meetings).

The essence of this meeting with Almagro is that the surrender of certain Latin American politicians, the Judas, capable, for a few silver coins, of serving as a yanacona to Zionism, allowing the infiltration of this corrupt regime, in order to develop policies where it develops its interests: arms sales, espionage, security, cybersecurity, and of course the fight against what it calls anti-Semitism, and the fight against social movements and Indigenous peoples opposed to the governments allied to Tel Aviv, is evident.

Almagro, according to Ephraim “also spoke a lot about the situation here in Latin America, in the region, the crisis in Venezuela, expectations of cooperation with Joe Biden’s administration in Latin America. It was a very positive conference, very interesting with a work plan in all aspects with the continent.” The words of Ephraim, Almagro, and the ambassadors of Zionism in Latin America are the evidence that everything ends up being known, even though there are requests to keep certain telematic meetings reserved to restricted access based on a code. Also known is the work of the yanaconas like Almagro that cause enormous damage to our societies and that in these days of increasing crimes of Zionism against the Palestinian people prefer to keep a low profile, the usual behavior of those accomplices of a regime like Israel.

Notes:
(1) Yanacona: From the Quechua word yanakuna. In the Inca empire, a person who worked in slavery. Over time they became personal servants of the Inca. It was also a derogatory term for those Indians who, contrary to their people in struggle, served as auxiliary troops of the Spanish conquerors.

(2) Ana Jerozolimski, Uruguayan of Polish origin, and current colonist living in al Quds since 1979. Editor of Semanario Hebreo (Hebrew Weekly) points out with respect to this interview of Almagro that “the trigger for this report was the controversy that the recent voting in Uruguay aroused at the United Nations Human Rights Council: approving an investigation in the case of Israeli settlements and its impact on Palestinian human rights.