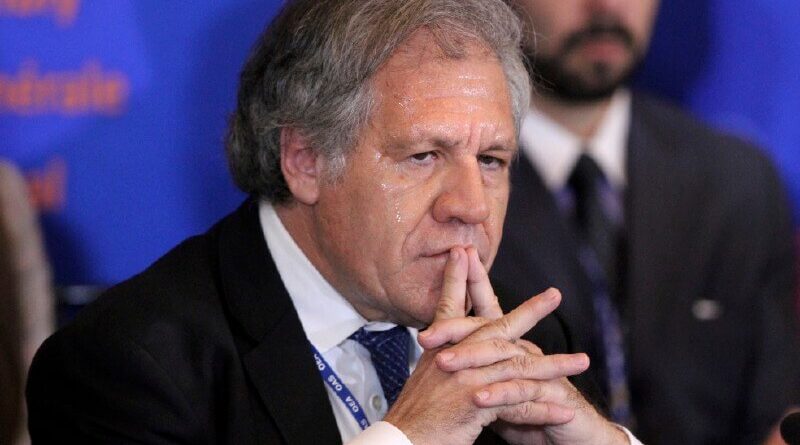 While there are plenty of reasons to be aware of what is happening in Colombia, the Secretary General of the Organization of American States (OAS), Luis Almagro , looks the other way.

As of noon this Tuesday, May 5, the Uruguayan head of OAS had not said a word about the human rights crisis in Colombia, nor has he expressed any crisis of conscience regarding the police repression and human rights abuses, which according to the National Strike Committee, had killed 27 people by May 2.

Instead of following events that should concern him, due to his high position in the regional organization, Almagro met via videoconference with an imaginary Venezuelan president concerned about human rights in Venezuela.

The situation would not be in the least suspiciously deliberate, if it were not for the violations of human rights occurring right next door [in Colombia].

On April 30 and May 3, Almagro held a conference with a spokesperson of the Venezuelan radical opposition. During these meetings he highlighted the determination of his body to “recover democracy and the validity of people’s rights and get out of the inhuman [Venezuelan] dictatorship.”

The club of silence
But this is not the first time that Almagro shines with his silence. The Uruguayan had already been questioned for his lack of condemnation of the repression of the Áñez dictatorship in Bolivia, or the violation of human rights during the protests in Chile and Ecuador in 2019.

Every time there is a country that goes up in flames, if it is a country other than Venezuela and one that is submissive to the US, the OAS makes it clear that its vocation is not democracy but rather to overthrow the Bolivarian Revolution or any other country that has an independent policy.

Although these days a lot of people ask where Almagro is, and why he does not comment on what is happening in Colombia, it is fair to mention that he is not the only one who is silent. There is also indignation about the lack of a pronouncement from the Lima Group, or any report by Michelle Bachelet, expressing concern about the human rights of Colombians who have been killed, injured, sexually assaulted or arbitrarily arrested.

Featured image: While dozens of Colombians are being killed, injured, and sexually abused by Ivan Duque’s repressive apparatus, OAS’ Luis Almagro is busy trying to keep the failed US “regime”-change operation against Venezuela alive. File photo.