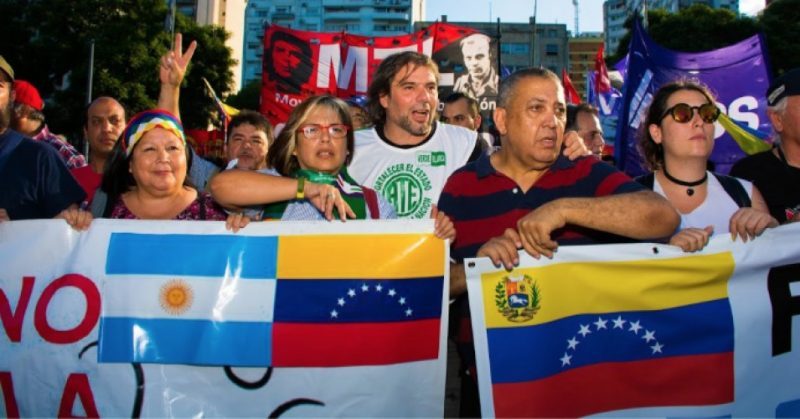 Anti-war voices are marking the 16th anniversary of the U.S.-led invasion of Iraq with a demand the U.S. government not take a page out of the same playbook and unleash similar catastrophe and carnage in Venezuela.

“Thousands of U.S. soldiers and hundreds of thousands of Iraqis lost their lives because of a war entered into under false pretenses,” said Paul Kawika Martin, senior director for policy and political affairs at Peace Action, in a statement. “Surveying the foreign policy challenges of the present, from Iran, to North Korea, to Venezuela, we must not repeat the mistakes of the past. Regime change has a disastrous track record.”

Codepink also marked the anniversary of when the U.S. “illegally, immorally, and unconstitutionally invaded Iraq.”

“We can’t do the same to Venezuela!” the organization said.

The U.S. is backing self-declared interim president Juan Guaido and imposing economic sanctions. The Trump administration has also warned that “all options are on the table” in terms of Venezuela.

We can’t do the same to #Venezuela! Tell your Congressmember #HandsOffVenezuela: https://t.co/EkEbrV6vjU pic.twitter.com/5ISleOUvrF

To prevent another war, the women-led organization is hoping to put pressure on lawmakers to pass legislation preventing President Donald Trump from using military force in Venezuela without congressional authorization. Just look to recent history, the group says, and it’s clear that when the U.S. backs a coup, “it always turns out disastrous for the people.”

The U.S. is orchestrating a coup in Venezuela that is likely to lead to bloodshed—even civil war. Instead of meddling the internal affairs of another country, the U.S. should be supporting peaceful dialogue facilitated by mediators such as Mexico, Uruguay, and the Pope. We have seen, and are seeing now at the U.S.-Mexico border, the effects of past U.S. backed coups in Latin America—Guatemala in 1953, Chile in 1973, Honduras in 2009. It always turns out disastrous for the people.

Send a message to your Senators and Representative telling them to cosponsor S.J.Res.11 in the Senate and H.R.1004 in the House to prevent Trump, [national security advisor John] Bolton, and [special envoy to Venezuela Elliot] Abrams from being able to send the U.S. military to intervene in Venezuela.

The 2003 invasion of Iraq became an ongoing war that has directly or indirectly killed hundreds of thousands of Iraqis—though by some estimates the death toll stands at over one million.

U.S. forces have also been accused of carrying out war crimes and other human rights violations in Iraq. And while U.S. Army whistleblower Chelsea Manning spent time in jail for exposing some of those crimes, architects and cheerleaders of the war have been given platforms at high profile universities, in corporate media, and within the Trump administration.

Rep. Ilhan Omar (D-Minn.), pointing to the invasion’s “trail of destruction and lives lost,” urged, “We must hold accountable those who repeated lied in the run-up to war.”

Sen. Bernie Sanders (I-Vt.), for his part, drew attention to the ongoing “disastrous consequences” of the invasion and called for “a foreign policy that focuses on diplomacy, not war.”