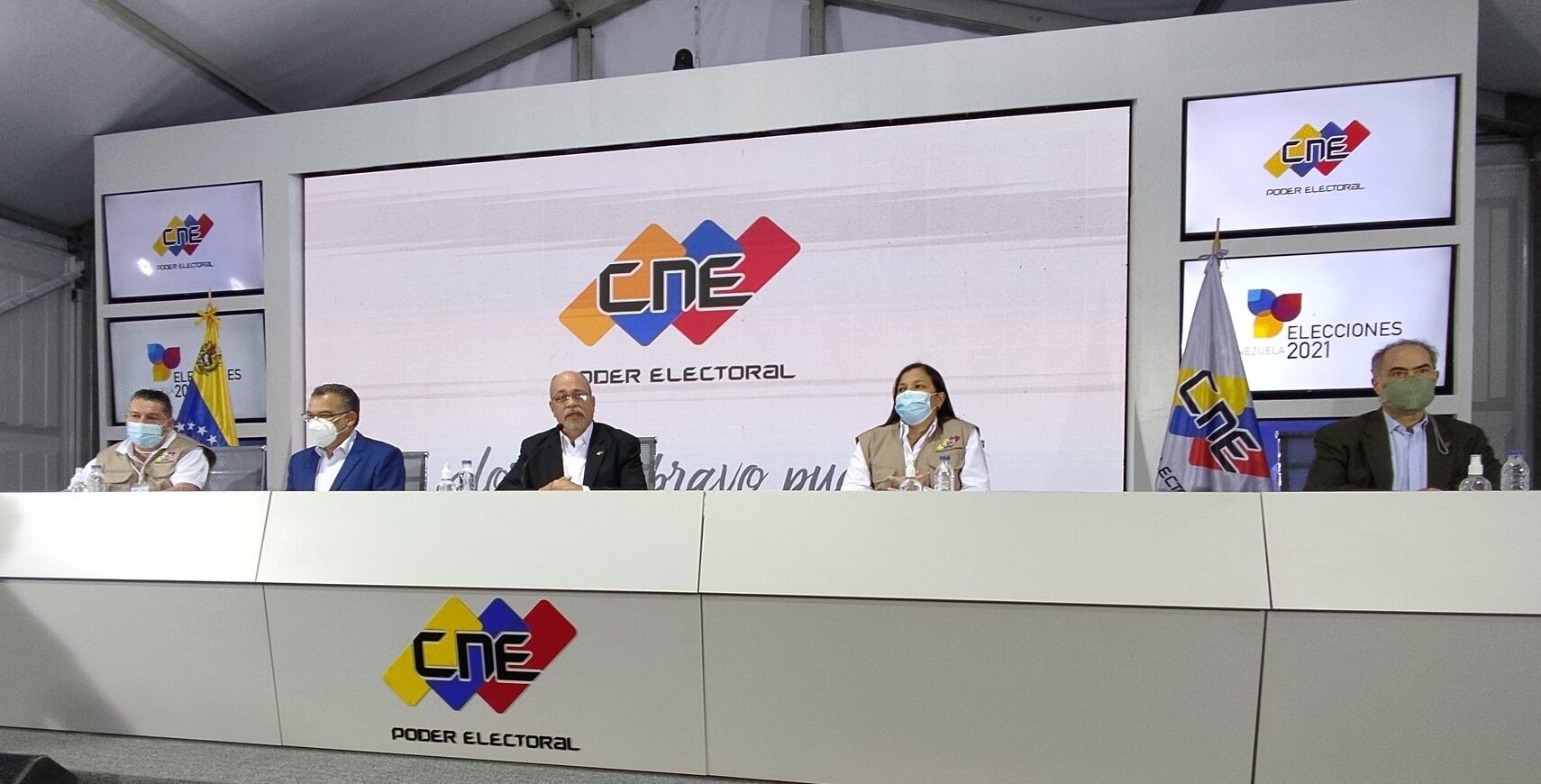 CNE President, Pedro Calzadilla, escorted by the four rectors of Venezuela's electoral body while reading the first report with the elections results. Photo by CNE.

On the night of Sunday, November 21, shortly before midnight, the president of Venezuela’s National Electoral Council (CNE), Pedro Calzadilla, issued the first report of the results of yesterday’s regional and municipal elections.

The foremost CNE official defined the electoral process as an extraordinary and successful day in which popular sovereignty again prevailed.

Likewise, Calzadilla thanked voters, political parties, candidates, workers of the CNE, Plan República agents, and other state officials who made possible the successful rollout of this new electoral challenge.

“The day passed in peace, without notable events that detracted from the vitality and strength of this electoral process,” said the president of the National Electoral Council as he presented the results with 91.21% of the data received. Calzadilla announced a turnout of 41.8% , equivalent to 8,151,793 voters, more than 10 points above the turnout for the parliamentary elections held in 2020, and a bit less than the turnout in the Chilean presidential race, also held this Sunday and reported at 47.1%.

New political landscape
The highest representative of the electoral authority pointed out that, although some data is still being awaited to complete the process, the high percentage of votes counted allows the CNE a good idea of what the final numbers will be in the coming hours.

Thus, he proceeded to announce the figures, which all but guarantee Chavismo’s victory for the governorship of 21 of 24 states, including the Capital District (Caracas), during an electoral event in which a total of more than 70,000 candidates from all political parties ran.

Calzadilla pointed out that for the mayor’s office of Caracas the people decided in favor of Carmen Meléndez, with 360,389 votes (58.9% of votes cast) amid voter participation of 36.3%. In second place was the opposition candidate Antonio Ecarri, with 95,045 votes for 15.5% of the total. 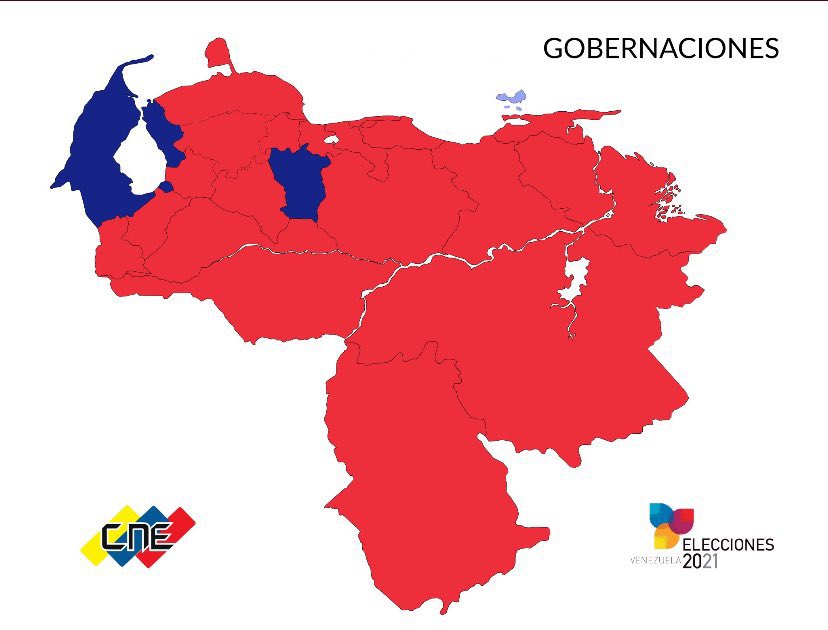 RELATED CONTENT: Anti-Chavismo Comes Out to Vote and Calls for Participation in 21N Regional Elections

Other regions: Monagas, Nueva Esparta, Portuguesa, Sucre, Táchira, Trujillo, Yaracuy, Zulia
The result in Monagas state was in favor of the Chavista candidate Ernesto Luna, with 141,033 votes for 45.6%, followed by Piero Maroum with 125,793 votes for 40.7%. In Nueva Esparta the victory went to the opposition candidate Morel Rodríguez from Fuerza Vecinal, with 81,698 votes for 42.6% of the total. Dante Rivas of the PSUV was defeated with 75,293 votes for 39.2%.

In the state of La Guaira the victory went to José Alejandro Terán of the PSUV, who defeated the candidate of the MUD, José Manuel Olivares, by obtaining 76,681 votes for 50.1%.

Rector Calzadilla stated that, with this data from the first report, with 90.2% of results transmitted, the National Electoral Council (CNE) authorizes the regional and municipal boards to tabulate and proclaim the respective positions.

Quick analysis with limited numbers
With the preliminary data provided by the CNE some analysts made several remarks:

• Chavismo recuperated two very important governorships, Anzoategui and Tachira.
• Chavismo lost the important state of Zulia.
• An extremely divided opposition would likely have captured a few more governorships if they had presented unified candidates. Victories in the states of Apure, Bolivar, Barinas, Lara, Miranda, and Tachira may have been possible. This analysis is made without yet having the complete numbers for those who finished in third and fourth place, but is based on those states with slim margins of victory for Chavismo, or with a high percentages of voters who did not vote for the first and second place candidates.
• In 2017’s regional elections the opposition won five governorships—although it lost Zulia a few weeks later—and this time it only managed to win three.

It will be important to see the electoral landscape for mayoralties, in order to compare the results with the 2018 municipal elections, in which 326 of 335 municipalities went into the hands of Chavismo. It is important to highlight that those 2018 elections were boycotted by the major opposition parties.