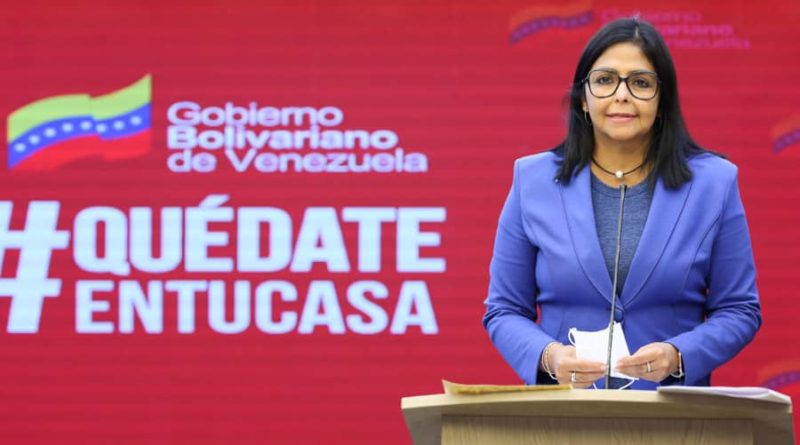 Venezuelan Vice President Delcy Rodríguez reported on Tuesday night 6 new cases of Covid-19 coronavirus. Two of them are women from the Bolívar State Comprehensive Social Care Post, coming from the Brazilian city of Manaus, and the other 4 cases are from Nueva Esparta state (Margarita Island), for a total of 367 cases detected throughout the country. The Margarita island cases are related to the outbreak in the baseball academy and the Coast Guard command.

She detailed the four cases of Nueva Esparta:

RELATED CONTENT: At NAM Summit Maduro Demands the Cessation of Illegal Sanctions to Face the Pandemic

Rodríguez explained that, to this day, there are 49 cases resulting from the outbreak in the baseball academy and 41 cases in the Coast Guard command outbreak, a consequence of the previous one. In total there are 116 cases in Nueva Esparta state. “This represents 50% of the active cases in Venezuela and a third of the total cases in the country,” explained Rodríguez, who called for reflection because these outbreaks were derived from 3 people who did not comply with the quarantine regulations.

As of today, there are 164 recovered cases (44% of the total), 100 cases in public hospitals, 73 in comprehensive diagnosis centers (CDI, equivalent to state clinics), 20 in private hospitals and the death toll remains at ten.

RELATED CONTENT: Venezuela Has Four New Coronavirus Cases on Monday for a Total 361

116 cases are asymptomatic people, recalled Delcy Rodríguez: they do not show symptoms but they are contagious.

27,322 Venezuelan migrants have returned to the country by land, Delcy Rodríguez reported.

She indicated that this Wednesday begins the return of fellow Venezuelans by instructions of President Maduro, and isolation protocols are underway there (quarantine for 2 weeks) before going to their destination states. She stressed that Venezuela has the lowest rate of deaths on the continent and the lowest rate of confirmed cases per million inhabitants.