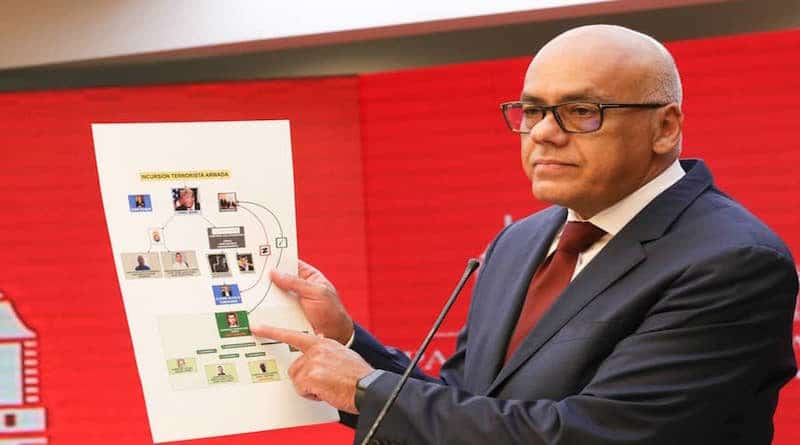 The Minister for Communication and Information, Jorge Rodríguez, revealed on Tuesday during a press conference where details were provided on the recent failed US led mercenary incursion on the Venezuelan coasts between Sunday, May 4 and Monday, May 5, whose actions were planned from Colombia with the participation of Venezuelan military deserters and US mercenaries.

In the press conference broadcasted from Miraflores Palace, the official referred to the disagreements that arose in the plan between deserter captain Antonio Sequea and Robert Colina (deceased), aka as Pantera, specifically because the latter was very close to Clíver Alcalá Cordones, who was leading the operation and was subject of a sort of coup d’etat within the coup plot he was planning against Venezuela.

Thus, Rodríguez specified that the ex-commissioner Iván Simonovis, who lives in the United States since he fled his residence in Venezuela and currently works closely with Carlos Vecchio and US security operators in Washington DC, agreed with Sequea to remove Alcalá from the operation and put Sequea as head of it. He even revealed that some of those captured say that Sequea abandoned aka Pantera, killed by the Venezuelan authorities while trying to enter the coasts of La Guaira.

The seizure of an arms cache belonging to this group in Colombia in March and later the US extraction operation of Cliver Alcala, disguised as an extradition by Washington, were moves in that play to displace Alcala and position Sequea as leader within the mercenary group and thus align it better with the interests of CIA operators in Washington.

On May 1, Jorge Rodriguez stressed, two boats left from the Doble Rueda farm in Colombia. One led by Pantera with 12 people destined for the state of La Guaira to attack institutions and government figures. In another boat, were Antonio Sequea, Adolfo Baduel and US mercenaries, but it changed its route to Chuao upon learning of the arrest of the first boat. On the coasts of Aragua they were apprehended in a civic-military operation led by militia fishermen.