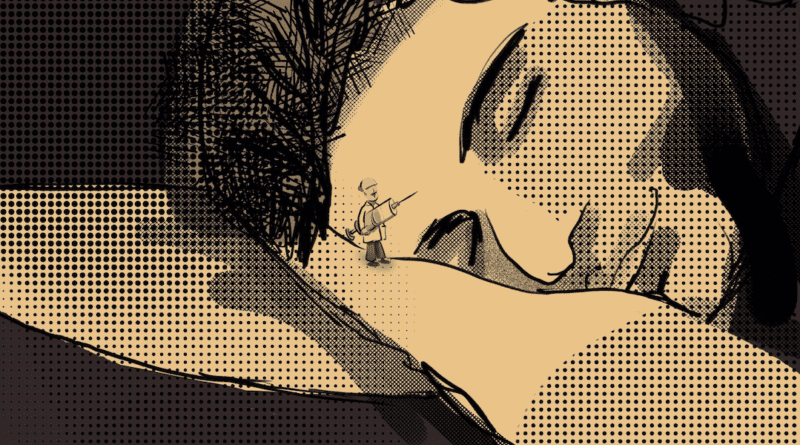 International Opinion
May 6, 2020May 6, 2020 Caitlin Johnstone an awakening for us citizens, MSM, the us needs a change, US politics

A slumbering giant began to stir and awaken.

The giant cracked an eye open to find a small man in a lab coat holding a needle and syringe half his size.

“I need to get up,” said the giant. “It feels like something’s wrong.”

“Nonsense, everything’s fine,” said the man in the lab coat. “We’ve taken care of everything. You need your rest. We’ll look after you. I’m going to give you some medicine to help you sleep.”

“How long was I asleep for?” the giant asked after wincing from the prick of the needle.

“Not long enough,” said the man. “Rest now. We’ve got everything taken care of.”

The man’s voice faded into blackness as the giant relaxed into the ground and lost consciousness. He dreamed that a great serpent was chasing him.

Much later, the giant awakened with a start to the sounds of distant gunfire and began to get up.

RELATED CONTENT: Is the United States a Superpower or Super Failure?

“Yes, there is a war, but it’s a necessary war,” said the man, struggling to fill a giant syringe with green liquid from a container nearby. “The side we’re fighting against is very bad and must be stopped. Their leader persecutes minorities, and kills babies for no reason! And we received intelligence saying that they were preparing to attack us with powerful weapons.”

“Oh that’s terrible!” said the giant, relaxing and laying his enormous head back down.

“Very terrible indeed,” said the man in the lab coat. “It will be over soon though. Victory is right around the corner. Then we’ll have peace.”

“I like peace,” said the giant, screwing his eyes shut as the needle went in.

Heavy eyelids closed, and the pops and explosions faded into nothingness.

A long time passed. The giant kept having nightmares about a venomous serpent biting his flesh.

Eventually the giant began awakening once again. The gunfire and explosions were still going, and they were louder than before. He opened his eyes and saw the man in the lab coat urinating on a tree.

“You said the war would be over soon,” said the giant.

“Oh! You’re awake!” said the man with a start, hastily zipping up and rushing to his medicine bag.

“Ah, yes, yes the war,” he said as he fumbled to prepare the needle. “Well see we got rid of the bad guy, but that ended up creating a power vacuum and now there’s an even worse bad guy in his place! This one actually eats babies!”

“I feel sick,” said the giant. “Something’s wrong with me. I need to get up.”

“You know I’m glad you brought that up, because it happens that we have put together a party that is dedicated to curing your sickness,” said the man. “You just relax and go back to sleep, and the party will take care of everything.”

“Why are there tubes in my flesh?” asked the giant.

“They’re there to help you become healthy,” the man replied. “Your medicine is ready. Just relax, you’ll feel a slight pin prick.”

“You’re sure you guys have a handle on this?”

The giant had nightmares that he was trapped in the coils of an enormous serpent. Every time he’d exhale it would squeeze its coils ever tighter around him.

A great long time later, the giant’s eyes opened again. He was lying on his back now, and he could feel tiny ropes being cast over his body.

“Shhh, relax,” the man in the lab coat said into his ear. “Go back to sleep.”

“They’re tying me up!” the giant protested, beginning to struggle and shake.

“It’s for your safety! Calm down,” said the man. “Sometimes you move in your sleep and we’re worried you might hurt yourself.”

“I still hear the war!” objected the giant. “And I feel even sicker now! What’s happening? You said your party would fix this!”

“There’s been a problem in the party, but we’re fixing it,” said the man. “There is a great revolutionary leader who is fighting to take control of the party, and he will put everything right. Soon big changes will be made, and all will be well.”

“I can make the changes myself!” roared the giant. “I am vast! I am powerful! I will make things right! Untie me and let me up!”

“Yes, you can. Of course you can,” said the man. “But we’ve got to work within the system. If you go upsetting the system, the bad guys will win!”

“Of course you don’t,” said the man. “You are good, and you are mighty. Now relax and go to sleep so we can win this revolution.”

The world fell away after the familiar needle prick, and the giant dreamed he was being swallowed alive by an enormous serpent.

After what felt like a very, very long time, the giant awoke to the sounds of construction. He opened his eyes and, after much straining through badly blurred vision, was able to make out cranes and pulleys all around him, lifting large iron bars which many men were working to affix to an enormous structure being built around him.

“Wh- what is this?” asked the giant. His voice was weak and raspy.

“Relax,” the familiar voice said into his ear. “It’s nothing. Go back to sleep.”

“They’re building a cage around me,” the giant whispered.

“It’s for your safety,” said the man in the lab coat. “We need to protect you from the bad guys while you sleep.”

The giant struggled to get up but couldn’t move.

“It’s for your safety, remember? Your safety is our highest priority.”

“We are helping you,” said the man. “We are making you well.”

“You’re using me. You’ve been using me this entire time.”

“That’s a paranoid delusion. You’re paranoid and crazy. I’m going to give you some medicine to calm down.”

The needle went in, followed by the familiar darkness.