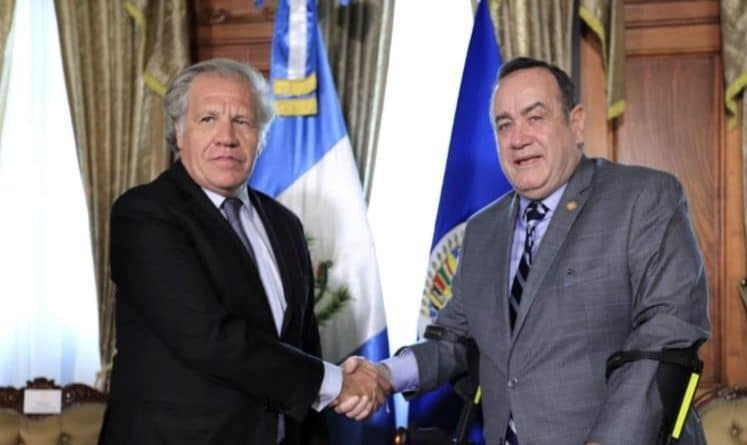 Alejandro Giammattei reported that they will close the Venezuelan Embassy in Guatemala City.

The new president of Guatemala, Alejandro Giammattei, reported Thursday that his government will break off relations with Venezuela permanently.

“We have issued orders to the Foreign Minister [Pedro Brolo] so that the only person left in the Venezuelan Embassy will proceed to his return to Venezuela and we will definitely close relations with the government of Venezuela,” he said, according to information from the Guatemalan News Agency.

Giammattei reported on the breaking of relations with the government of Nicolás Maduro after meeting with the Secretary General of the Organization of American States (OAS), Luis Almagro, in the National Palace of Guatemala City.

For his part, the Foreign Minister of Venezuela, Jorge Arreaza, said that with this decision the Guatemalan president “has thrown himself at the feet of Donald Trump.” “With certainty his government will become another joke in bad taste that we will see pass and dry up. Our respect and affection for the dignified Guatemalan people,” the foreign minister wrote.

In October 2019, the government of Venezuela denied Giammattei entry to the territory of the country because he had entered with an Italian passport and without authorization from the Executive. Later in a video, the then elected president of Guatemala reported that he planned to meet with Venezuelan opposition leader Juan Guaidó.

“Once Mr. Giammattei himself ruled out that the reason for his trip was that of a visit of a tourist or private nature, and since there is no proof of invitation by the National Executive, nor any coordination on the part of the Guatemalan Embassy in relation to this visit, his inadmissibility was declared,” explained the Venezuelan Foreign Ministry in a press release.

Since he was an elected candidate, Giammattei announced that he would “totally break relations with Maduro’s Venezuela “when he assumed the presidency of the Central American country, which happened last Tuesday.
The international analyst Julian Rivas described Giammattei’s step as unfortunate and said that it corresponds to the foreign policy of Washington.

Featured image: The Guatemalan president had already announced that he would put an end to relations with the government of Nicolás Maduro. Photo: Presidency of Guatemala via Reuters.