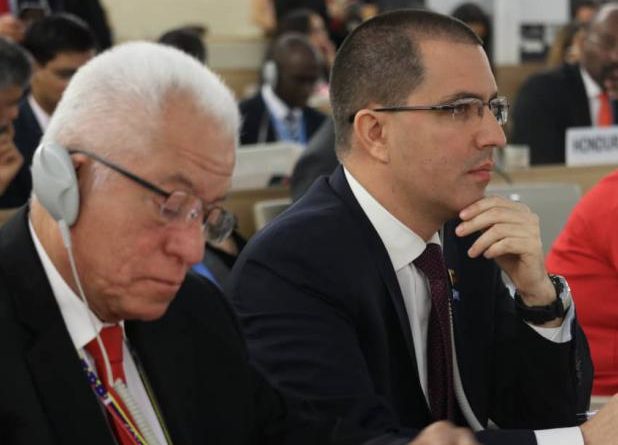 March 10, 2020.-Venezuelan Ambassador Jorge Valero participated in the hearing in which Michelle Bachelet presented an update on the report of Venezuela to the Human Rights Council.

The United Nations High Commissioner for Human Rights, Michelle Bachelet, besides recognizing the negative effect of US Santions and the National Dialogue Table initiative, criticized the alleged abuses committed by the government of Venezuela against opposition sectors, non-governmental organizations and journalists.

In this regard, the Venezuelan ambassador to the UN in Geneva, Jorge Valero, lamented on Tuesday that the report of the High Commissioner for Human Rights, Michelle Bachelet, on the South American country, is plagued with lies and lacks the necessary balance.

“We regret that your presentation lacks the necessary balance, as it observes methodological flaws and uses biased information that can feed the media campaign against Venezuela,” said the Venezuelan diplomat.

Valero responded that “it is intended to impose an unsuccessful monitoring mechanism, whose implementation costs more than two and a half million dollars, to prepare a report (that for sure will be) plagued with lies.”

“It constitutes an irresponsible expense of the scarce resources available to the Universal Human Rights System,” he noted.

The ambassador criticized the countries promoting the report against Venezuela for not observing the situation on human rights in their own territory.

“If you truly advocate for human rights, the countries that support this hostile initiative, instead of criticizing Venezuelan democracy, should be concerned about the serious and massive human rights violations that are being committed in the countries of our region that promote this initiative,” he added.

Valero made reference to Colombia, Brazil, Peru and Canada, noting in addition that these nations have not condemned the bloody coup against the president of Bolivia, Evo Morales.

The ambassador also reiterated that Venezuela is the victim of economic sanctions by the United States that constitute “crimes against humanity.”

“The supremacist government of Donald Trump has restored the Monroe doctrine, and threatens to invade our country militarily,” he said, adding that Washington’s unilateral coercive measures “have stolen $ 116 billion from Venezuela, equivalent to six years of [the national] budget.”

These measures, he warned, decrease the resources of the Venezuelan government for social spending, for which more than 70 percent of the country’s budget is allocated.