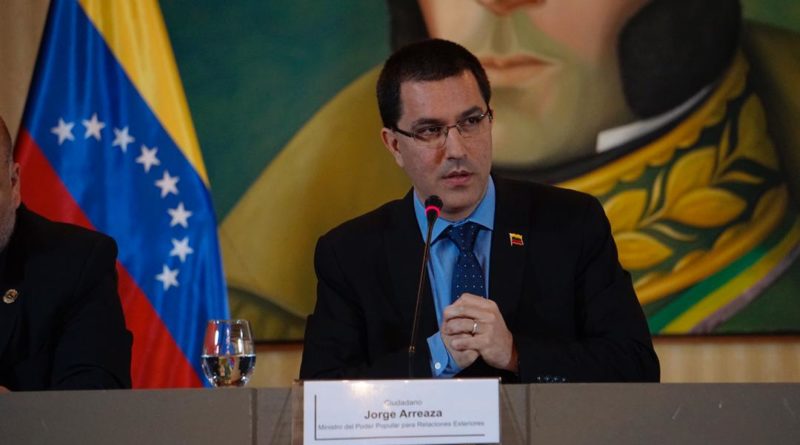 On Monday, Venezuelan Foreign Minister, Jorge Arreaza, denounced the threats of a naval blockade against the country by the United States regime.

“A tactic has been detected within the plan of imperialism against Venezuela, which is obvious, but we must explain it. International mass media downplay elements that are notable, there is mention again of a naval blockade,” said Arreaza during the meeting with the diplomatic corps, at Casa Amarilla, in Caracas.

Faced with this possible scenario, the Venezuelan diplomat said that “our Bolivarian National Armed Forces (Fanb) is deployed; today when the “Bolivarian Shield II 2020” military drills that is being performed. The people will know how to defend themselves, we will know how to respond,” said Arreaza.

He also denounced the constant aggression undertaken by the governments of Colombia, Brazil and the United States against Venezuela.

In this regard, he said that US President Donald Trump, as well as the Department of Defense and the US Southern Command, have met in recent days with the presidents of Colombia and Brazil, Iván Duque and Jair Bolsonaro, respectively, in order to promote destabilizing acts in our country and increase unilateral coercive measures.

He said that Duque, in a meeting with Trump, on March 2, called for “stronger” sanctions against the people of Venezuela.

“We saw Bolsonaro sign agreements with the head of the Southern Command and Venezuela appears first on the agenda.” said Arreaza.

He also questioned that the head of the Southern Command, Craig Faller, met with the Colombian Navy general to discuss matters about Venezuela. “Why does Venezuela always appear permanently in military meetings? Why should the military think politically about the governments of the region? It is obviously a large-scale operation,” he stressed.

Meanwhile, Arreaza said that these governments do not give up the idea of implementing the Inter-American Treaty of Reciprocal Assistance (Tiar), which they claim will help a military intervention in the event of an extra-regional attack. “They have tried to activate it. There is a chain of command that is being developed from the White House to attack the Venezuelan people at all levels,” said the foreign minister.

He also blamed the self-proclaimed interim president of Venezuela, Juan Guaidó, for the unilateral and coercive measures that Venezuela faces and that seek to directly attack rights such as food and the health of Venezuelans.

“Guaido’s tours seek more sanctions: that of Conviasa, the coercive measures against the Russian oil company Rosfnet” that affects the oil market, the main source of income for Venezuela, he said.

Violation of the United Nations Charter.

In that scenario, Arreaza said that such illegal measures against Venezuela, driven mainly by the US government, “violate the Charter of the United Nations.”

“While they violate the Charter of the United Nations, we stick to it and to International Law; we go to the Security Council and give the details of everything they prepare behind their backs,” he said.

In the meeting, Arreaza asked the diplomatic corps to communicate to each of its peoples the attack that is being planned against Venezuela and the scenarios that foreign governments want to create to undermine national sovereignty.