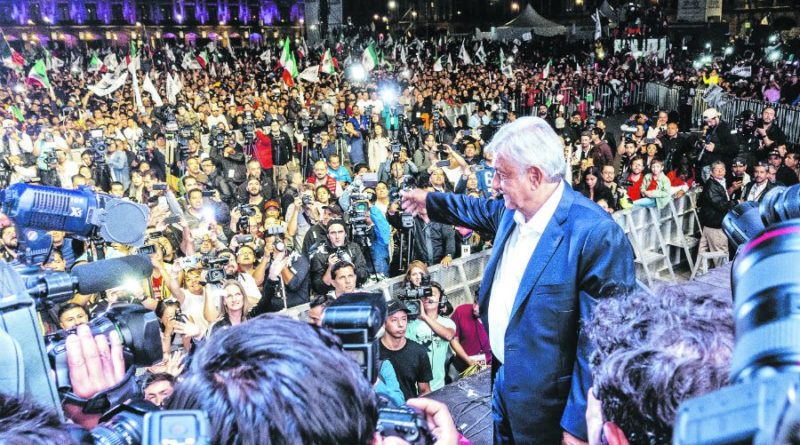 1. All the Yankee governments, at least since the atomic bombs were criminally dropped on two cities in Japan, at the end of the Second World War, have believed themselves to be the masters of the world, the world police, which all countries must respect. For some brutally destroyed countries to recover, the US did offer help; it hooked up loans from the Marshall Plan — as today happens with the IMF, the World Bank — mortgaging the economy and then subjecting them with the harmful, large interest payments. Since then, the world debt has grown enormously and with it, the US “has killed two birds with one stone.” It a) lives by plundering indebted countries and b) it keeps them in a severe regime of submission.

2. Mexico has never been an independent country. We were subjected to Spain for about 300 years and after achieving our independence in 1821, we were victims of intimidating ambushes from European countries such as England, France and also the US. Even Porfirio Díaz was looking for greater European intervention to oppose it to the desperate intervention of the United States. This country (USA) has not only stolen half of our territory from 1836 to 1848, but the whole of the 20th century and what is going on in the 21st, it has imposed its politics and economy on us as it wanted. The last assault was what we knew as the North america Free Trade Agreement (NAFTA) that began in 1994 for the benefit of large businessmen, today abbreviated as USMCA, in Mexico I think it is TMEX.

3. The important thing is — as we said before the FTA was signed in 1993, this treaty between the US, Canada and Mexico would only be for the benefit of the large companies of the three countries while the peoples — particularly that of Mexico- would only collect leftovers of the succulent banquet. And what we said 27 years ago is what has turned out. Large companies in Mexico have had growth, but 60 percent of the population has continued in poverty and misery. But in modernity what always appear are numbers that distort reality. Example: if Mexico earned 100 million pesos and its inhabitants are 100 million, it should go as one million pesos per head. Nothing more fair and equitable.

4. The problem is that President AMLO — on his next trip to the US — has no choice but to behave well. It cannot be forgotten that all the presidents of the dependent countries, like Mexico, with gigantic debts and millions of workers who work in the country of Trump and send their money to their relatives in Mexico, cannot offend him, not even with the petal of a rose. Will López Obrador be able to repeat in front of Trump the famous aphorism of Benito Juárez: “self-determination and non-intervention” in Venezuela and Iran because “respect for the rights of others is peace”? Mexico, like almost all countries in the world, respects all nations, does not intervene in any to prevent others from doing so in Mexico. Hopefully Trump will educate himself and thank Mexico.