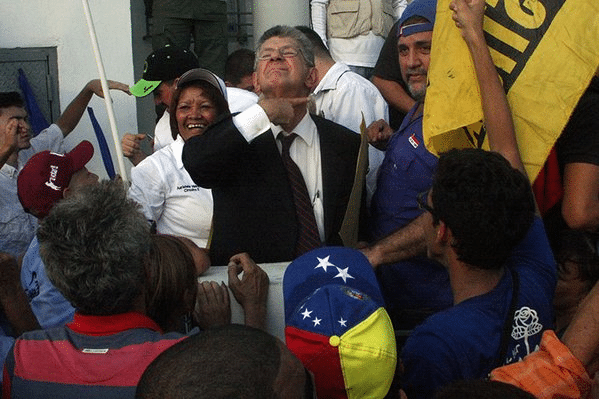 The once almighty “Accion Democratica” political party, right now I think is experiencing one of its worst moments, when the Supreme Court of Justice decides that this organization for political pourpose should adjust its structure and operation to legal and constitutional constraints, but since many years ago, their actions, both internal (they do not conduct elections) and external (they are abstentionists), are not democratic at all . . . and of that organization that once called itself “the people’s party”, what remains is a small political party, which survives because it has 4 governors so far . . . but it is no longer the same as when it came to be considered among the three largest Latin American political parties, along with the Mexican PRI and the Peruvian APRA.

What is happening at the moment? . . . The former political chief, Henry Ramos Allup, has to deliver everything that makes up AD, (headquarters, emblems, card, colors, goods) to an ad Hoc board so that it may restructure and democratize an organization for political purposes, which was under strong internal control, and now they are crying because they do not want to accept the decisions of the Supreme Court (TSJ) . . . wanting to sell an image of themselves as victims of a communist dictatorship that does not let them be . . . with a wicked and contradictory discourse that they are attacked by a political regime, which is totally intolerant of some sectors of the opposition . . .

And these Adecos who cry because they are being left “without their party”, cry pure crocodile tears, and it is important to remember history . . . in the so-called Adeco triennium of 1945 – 1948, they were known as “Adeco sectarianism”, since they did not accept any opposition … and they had their shock brigades, “the protest breakers”, who were in charge of dispersing any anti-government demonstration . . . and then came “puntofijismo” (1958 – 1993), when in those first ten years of “representative democracy” they tortured, murdered and disappeared thousands of people, who thought politically different, they also got divided several times in that period . . .

They were so sectarian in power, that to work in the public administration, you had to present the party ID and a letter of application . . .