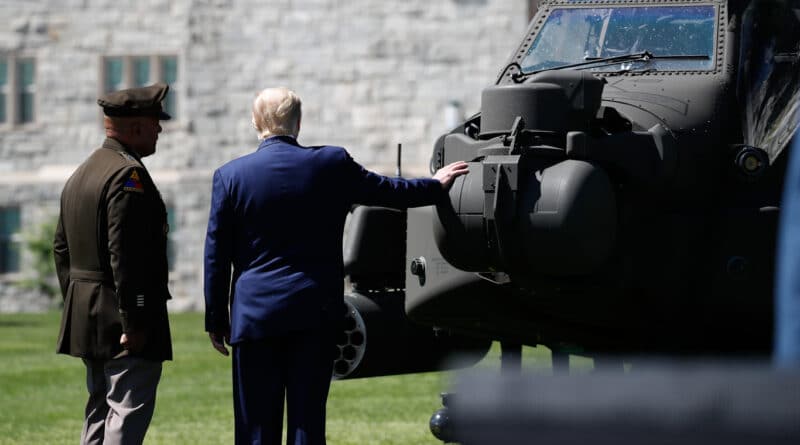 The National Priorities Project has put together a list of ten better uses for the $74 billion than giving it to one of the world’s largest bureaucracies.

The majority of House Democrats joined with the Republican colleagues yesterday in voting down progressive legislation that would have cut the Pentagon budget by 10 percent ($74 billion) and used the money to fund healthcare, housing, and education for the poorest Americans.

The amendment to the National Defense Authorization Act, sponsored by Barbara Lee (D–CA) and Mark Pocan (D–WI) was soundly defeated 93-324, with 139 Democrats joining all 185 voting Republicans in rejecting the idea. Despite the defeat, Pocan vowed to continue pushing an anti-war agenda. “We will keep fighting for pro-peace, pro-people budgets until it becomes a reality,” he said. Democrats who voted against the military budget cuts received over three times the contributions from the defense industry as those who voted for the reduction. Earlier today, the Senate also voted down the proposal.

But this is the first time in decades that Congress has considered a significant cut to Pentagon spending.

The military-industrial complex will fall. We will end our addiction to endless, costly wars. pic.twitter.com/LigzB9XtVJ

The result will no doubt disappoint the majority of Americans as well. A poll conducted last week by Data for Progress found that 56 percent of the country supported the idea to defund the military and use the money to fight COVID-19 alleviate the growing housing crisis. Democrat-voters supported the plan by 69 to 19 percent, with Republicans also backing it, by 50 to 37 percent. The proposal is hardly a radical shift; the military’s budget has increased by around 20 percent under President Trump alone, reaching near-historic highs.

The National Priorities Project, a part of the Institute for Policy Studies think tank, put together a list of ten better uses for the $74 billion than giving it to one of the world’s largest bureaucracies. This included:

Ashik Siddique of the National Priorities Project told MintPress that he was disappointed with the results, but that he was hopeful for the future:

It’s important to note how quickly the political landscape is shifting around this issue. This is the first time in decades that Congress has seriously considered reinvesting away from Pentagon spending. Just a few years ago, it would have been hard to imagine getting even 93 votes in the House and 23 in the Senate — or nearly 40 to 50 percent of the Democratic Caucus — to cut the Pentagon budget by 10 percent, as they did this time.

That sets up a much stronger baseline to work from next year — especially since the budget caps put in place by the Budget Control Act of 2011 will expire, giving Americans the chance to more deeply transform this country’s militarized agenda in a way that has not been on the table for decades.”

RELATED CONTENT: All Confusion and Contradictions in Trump’s Apocalyptic America

Siddique’s figures demonstrate just how much money is spent on war and what could be possible in the United States if there was a paradigm shift away from bloated military spending. The U.S. military budget is by far the largest in the world, rivaling that of all other countries combined. More than half of all discretionary spending goes to the Pentagon, with the U.S. spending far more per capita on weaponry than comparable countries. Yet even the $740 billion defense bill does not tell the full story, as it does not include the costs of nuclear weapons (borne by the Department of Energy), nor many veterans’ pensions.

In February the Pentagon announced its fiscal year 2021 budget request, in which it signaled a move away from the Middle East as its primary focus, towards that of Russia and China. Secretary of Defense Mark Esper declared the Asian Pacific region to be the U.S.’ new “priority theater.” There appears to be no partisan split in foreign policy, with both Democrats and Republicans viewing China as an increasing nemesis. In recent weeks Donald Trump and Joe Biden have accused each other of being in Beijing’s pockets while ratcheting up the tensions with the world’s most populous country.

Like with the cut to military spending, however, the political elite’s opinion varies radically with that of the general public. When polling group Pew asked what was the number one international threat to America, the spread of infectious disease was by some way the top answer. Unfortunately, the Trump administration has been cutting health budgets, including attempting to slash funding for the Center for Disease control. Internationally, he has also committed the U.S. to leaving the World Health Organization, a move that is sure to wreak havoc internationally and undermine cooperation against future worldwide health threats.