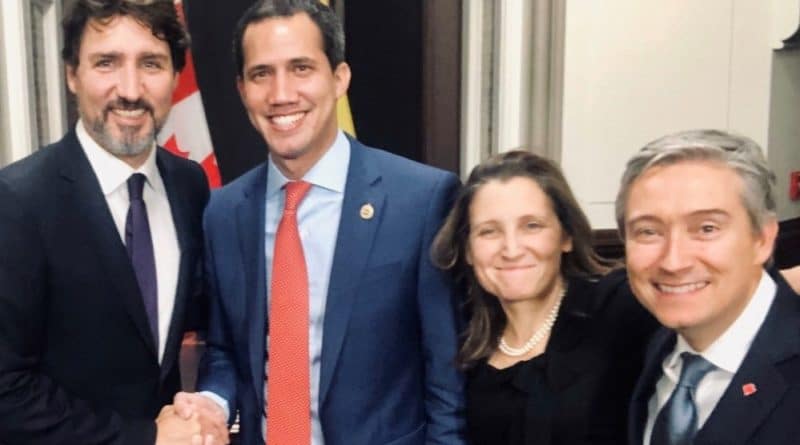 The effort Justin Trudeau’s government is putting into removing Venezuela’s President is remarkable. So is the utter hypocrisy of their campaign.

On Thursday Ottawa hosted the Lima Group, a coalition of countries supporting Washington’s bid to overthrow the Venezuelan government. A CBC headline noted, “Ottawa attempts to reboot campaign to remove Maduro from power in Venezuela.” For more than a year the Lima Group has openly pushed Venezuela’s military to overthrow the government. Thursday’s summit was the third held in Canada of a coalition instigated by Canada and Peru in mid 2017.

During the recent Munich Security Conference Trudeau discussed the South American country with a US Senate and House of Representatives delegation led by Republican Senator Lindsey Graham. The Prime Minister’s release noted, “the Congressional delegation thanked Canada for its leadership on the Lima Group and for supporting Interim President Juan Guaidó and the Venezuelan National Assembly in their efforts to achieve a peaceful democratic transition in Venezuela.”

Similarly, the Prime Minister discussed Venezuela at a meeting with Austria’s Chancellor on the sidelines of the Munich Security Conference. According to Chancellor Sebastian Kurz, Canada and Austria “have many shared goals such as the empowerment of women and our support for free & fair elections in Venezuela.” According to this formulation, the empowerment of half the world’s population is of similar import to purported electoral discrepancies in Venezuela.

Over the past couple of years, the government has put out hundreds of press releases, tweets and public statements critical of the Venezuelan government. They hired a Special Advisor on Venezuela to oversee the government’s coup efforts and the Professional Association of Foreign Service Officers gave Patricia Atkinson, Head of the Venezuela Task Force at Global Affairs, its Foreign Service Officers award in June 2019 for her role in overseeing a team of diplomats that organized Lima Group meetings, sanctions, etc. The government has implemented four rounds of sanctions against Venezuelan officials and it’s brought that country to the International Criminal Court, shuttered its Embassy in Caracas, funded opposition groups and decided a marginal opposition politician was the legitimate president.

A look at Canada’s Lima Group allies highlights the hypocrisy of their campaign against Venezuela. The constitutional legitimacy of Honduras’ President is far weaker than Maduro’s; Far more dissidents were assassinated in Colombia last year; The government of Chile is facing greater popular contestation; The electoral legitimacy of Haiti’s President is much weaker; Honduras’ president has clearer links to drug runners; Violence is worse in numerous countries in the Hemisphere.

It is true that Venezuela’s economic downturn – and concurrent outward migration – is substantially worse than other Lima Group members. But, the sanctions imposed by the US and Canada have contributed to Venezuela’s economic collapse as much as any action of the government.

Canada is engaged in an extraordinary effort to overthrow President Nicolas Maduro. But, it isn’t designed to advance democracy or human rights in Venezuela.