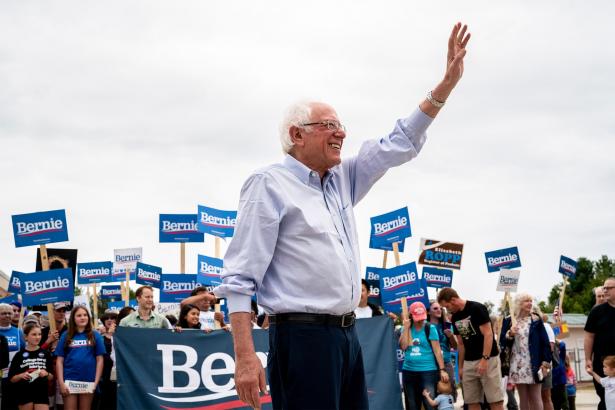 Working hand-in-hand with the Democratic National Committee to stop Bernie are their compatriots MSNBC, CNN, the New York Times, the Washington Post, and other media stalwarts that style themselves as the official opposition to Trump/Fox News.

Back in the 1890s, the People’s Party, better known as the Populists, gave the leaders of the nation’s two major political parties the scare of their lives, mounting the biggest third-party challenge in U.S. history. It was indeed a people’s party, challenging the corporate hegemony that had taken over the nation and giving a long-overdue voice to the farmers, factory workers – both black and white – and small business folks that both the Democratic and Republican parties had too long ignored.

In many ways, the establishment parties had become what Louisiana’s Huey Long would decades later deride as the “high popalorum” and “low popahirum” of American politics, what Alabama Gov. George Wallace meant three decades later when he said there’s “not a dime’s worth of difference” in the two major parties.

As flawed as Long and Wallace may have been, they were on to something.

Post-Civil War greed and the piles of money coming out of industrialization had so corrupted American politics by the end of the 19th century that average working folks had nowhere to turn other than a third party. In the South, ruling “Bourbon Democrats” appealed “to Southerners when they recalled nostalgic antebellum days and identified themselves with the romantic cult of the Confederacy,” but in their hearts they “were preeminently commercial-minded men who purposely aligned themselves with the Republican-industrial North in order to exploit the manpower and resources of their section,” historian Monroe Billington has written.

Well-heeled leaders of the Democratic Party finally managed to pull the rug out from under the Populists, pushing “fusion” and co-opting their key issues and maneuvering and manipulating them eventually out of existence, leaving a legacy of disillusionment that took decades to repair. The Populists “blamed themselves for ever consenting to an unholy alliance with the enemy,” Billington wrote.

The modern-day Democratic Party faces a similar challenge in the populist uprising that Bernie Sanders represents, and its leaders have and will continue to fight tooth and nail to make sure he doesn’t become its titular head and certainly not president of the United States. Working hand-in-hand with the Democratic National Committee are their compatriots MSNBC, CNN, the New York Times, the Washington Post, and other media stalwarts that style themselves as the official opposition to Trump/Fox News rule.

“People all over this country worked their way through school, sent their kids to school, paid off student loans,” James Carville recently ranted to MSNBC about Sanders’ call for free college tuition and student debt retirement. “They don’t want to hear this shit.”

Carville, of course, was a key architect of Clintonian politics in the 1990s, the centrist, neo-liberal, pro-corporate core philosophy of the Democratic National Committee today.

In response to Carville’s rant, writer Ed Burmila in the New Republic correctly pointed out that the 1970s world Carville invoked has little to do with today’s world, in which college expenses equal nearly 52 percent of a man’s median annual income and a whopping 81 percent of a woman’s. Today an entire generation of college graduates potentially face lifelong debt from their student loans.

MSNBC commentator Chris Matthews, himself a relic of “the good ol’ days” when he was an aide to former U.S. House Speaker Tip O’Neill, told viewers recently that Sanders’ victory in Nevada reminded him of the Nazi takeover of France in World War II. That comment prompted calls for Matthews’ firing. Did Matthews forget Sanders is Jewish and lost family members in the Holocaust? Even earlier Matthews talked about the Cold War of the 1950s when critics of socialist regimes might be taken to a public park and shot, loosely implying that might be his fate under a Bernie Sanders regime. So Sanders is likened to both Nazis and Communists in Matthews’ world. Give me a damn break!

The Democratic Party establishment, as tied to Wall Street as its Republican counterpart, is scared to death of Bernie Sanders. This was evident four years ago when its operatives leaked debate questions to favored candidate Hillary Clinton to give her an advantage over challenger Sanders. That same establishment spent nearly the next three years constructing “Russiagate” to claim it was Russian collusion that elected Trump, not Hillary Clinton’s failed campaign, Russian collusion that exposed the corruption within official Democratic ranks. In the process, “journalists” like Rachel Maddow completely lost credit by buying into the Russiagate conspiracy hook, line, and sinker.

More recently, the Iowa caucus exposed more DNC and Clintonian shenanigans as the Iowa Democratic Party decided to use an app designed by Clinton operatives to tally the vote, ultimately screwing up the count long enough to make sure Bernie Sanders didn’t come out of Iowa with any kind of momentum that might help him in the New Hampshire primary. Well, he won the New Hampshire primary despite their best efforts and now is the leader in the still-wide field of Democratic candidates.

Next to enter the stage was billionaire and former Republican Mike Bloomberg buying his way into second place behind Bernie with untold millions of dollars in television and social media ads that paint him as kind of a Lone Ranger there to save the party from a socialist takeover (which is his real goal, even more than defeating Donald Trump). Bloomberg’s disastrous performance in the debate before the Nevada caucus proved that even tons of money can’t hide the host of skeletons in his closet, but he has already signaled that he’s planning to spend more tons to bring Sanders’ down as the campaign heads south.

To get truth about this campaign one has to go to social media and YouTube programs like “The Hill” and hear former MSNBC commentator Krystal Ball tell it like it truly is. Another is Kyle Kulinski. Still another is Jimmy Dore. Here you get the cogent analysis that’s missing in traditional media. They’re young, sharp, and hungry for truth, and they speak to the same generation that has become the core of Bernie Sanders’ movement. They’re the future, not James Carville, Chris Matthews, and the other troglodytes who believe they still have something to say to the American people.

Joseph B. Atkins is a veteran writer and professor of journalism at the University of Mississippi. He is the author of Covering for the Bosses: Labor and the Southern Press (University Press of Mississippi, 2008) as well as the novel Casey’s Last Chance (Sartoris Literary Group, 2015). His blog is http://www.laborsouth.blogspot.com.