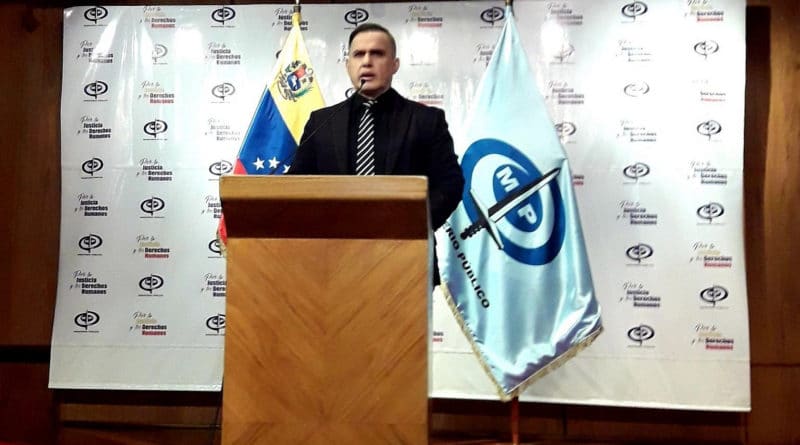 The Venezuelan Attorney General, Tarek William Saab, gave a press conference this June 15 reporting on two cases: On the one hand, he indicated that arrest warrants were requested against José Tomás Pinto Marrero, national secretary of the Movimiento Tupamaro party, and against three other citizens who work with him, for their alleged responsibility in the death of the teenager George Soto Berroterán, 16, who disappeared since June 1 in the state of La Guaira.

The Attorney General indicated that on June 1 the disappearance of the teenager was reported by his mother and the MP also had the testimony of Juan Romero, a worker at La Tupareña farm, allegedly belonging to the politician, who said that on May 23, Pinto Marrero ordered his escorts to attack him “until he admitted having appropriated merchandise and money resulting from their fishing work.”

“The escorts subdued and beat Juan Romero with their weapons and demanded that the rest of the fishermen also beat him, including the teenager George Soto Berroterán, who refused to do so. His refusal motivated him to be beaten by these citizens, who singled him out as being complicit in the theft. While the escorts and two fishermen attacked the teenager, Juan Romero managed to escape into the mountain,” said Saab.

The attorney general indicated that, after the investigation, it was determined that the death of the teenager and the injuries suffered by Juan Romero “were caused by Pinto’s escorts and fishermen who acted deliberately under his instructions,” while stressing that the facts occurred in the presence of Pinto who was “at a short distance from where the events were taking place.”

He added that on June 12 the Scientific, Criminal and Criminal Investigations Corps (Cicpc) found on the farm a grave sealed with concrete, a skeleton and on it a bag with clothing and the personal documents of the teenager.

“In the technical tests it was determined that the skeleton is human, it belonged to a teenager and that it has a hole in the skull produced by the passage of a projectile fired by a firearm,” said Saab.

In recent days after CICPC called Tupamaro’s Jose Pinto for a brief interrogation, the political leader and well respected grassroots activist posted a series of tweets pointing at the CICPC as a police agency infiltrated by reactionary elements but not providing any comment about the incident on his farm.