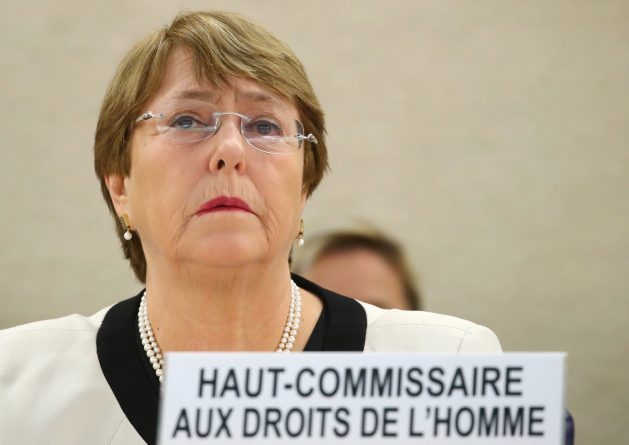 Last February the 27th, the Venezuelan Minister of Foreign Affairs visited Geneva to address the United Nations Human Right Commission and during the activity he held a meeting with the High Commissioner for Human Rights, former Chilean President Michell Bachelet and invited her to visit Venezuela to perform an evaluation of the Human Right conditions of the country.

Today Michel Bachelet during her speech presenting the Human Right Commission anual report, talked about Saudi Arabia, Israel, China and India but also announced a delegation to be sent to Venezuela next March the 10th to prepare an evaluation report.

“The situation in Venezuela clearly illustrates the way violations of civil and political rights – including failure to uphold fundamental freedoms, and the independence of key institutions – can accentuate a decline of economic and social rights,” Bachelet said. “This situation has been exacerbated by sanctions, and the resulting current political, economic, social and institutional crisis is alarming”, she added.

Immediately right wing activists on social networks began a hard attack on the high ranking UN oficial -based on the last part of her words- even putting her together with Pope Francis in the same group as can be seen in the tweet below. This shows the level of desperation of right wing factors in Venezuela and outside Venezuela and is a red flag for a possible boycott or a dirty campaign against this important visit.

RELATED CONTENT: Jorge Arreaza – UN Security Council: How in the House of the Multilateralism is it Not Possible to Prevent the Rule of Unilateralism and US Dictatorship? (VIDEO)

Pope Francis made a public statement the first week of February offering his mediation in the case both parties in conflict in Venezuela were willing to negotiate. President Maduro accepted the proposal and Self-Proclaimed Guaido rejected it. Right wing factors accuse the Pope and Michel Bachelet of being “communist agents” now.

Pope Francis has offered to mediate talks between #Venezuela‘s President Maduro & US-backed opposition Guaido – if both sides are willing to talk. Maduro says yes, but Guaido says no. If Guaido is such a champion of democracy, why does he refuse to hold peaceful dialogue? ?