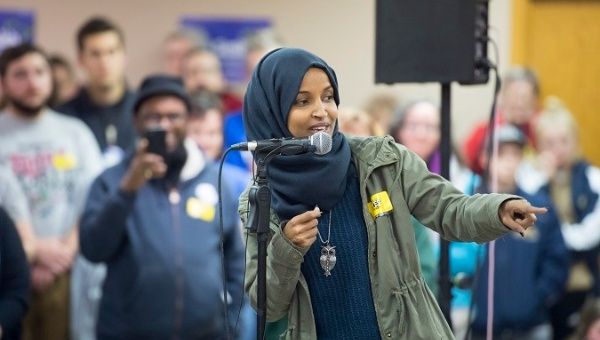 Ilhan Omar has been under attack for criticizing Israel’s overt influence on United States politics, suggesting that members of the U.S. Congress support Israel because of money they receive from pro-Israel lobbying groups.

The House Democratic leadership has been forced to drop a vote on a resolution to condemn anti-semitism and bigotry, after a high number of lawmakers outpoured support for Ilhan Omar, one of the few progressive lawmakers in the United States Congress, stating that she was being singled out unfairly.

The Vermont independent, Senator Bernie Sanders, who is running again for the Democratic presidential nomination, stated that he fears that there “is going on in the House now is an effort to target Congresswoman Omar,” which is fomented “as a way of stifling” the debate over a very “legitimate criticism of the right-wing, Netanyahu government in Israel.”

Several Democrats lawmakers, including African American and Latinos representatives, confronted the decision backed by Speaker Nancy Pelosi of pushing a resolution when prejudiced comments by Republicans have passed without any objections or complaints.

People have been emitting support for congressional freshman Congresswoman Rep. Ilhan Omar, denouncing that most of the critics’ behavior towards Omar was “xenophobic” and “racist.” For example Ayanna Pressley, Democrat lawmaker for the Massachusetts state, argued that “Islamophobia (like the one suffered by Rep. Omar) needs to be included” in an anti-exclusion resolution. “We need to denounce all forms of hate. There is no hierarchy of hurt.”

New York Representative, Alexandria Ocasio-Cortez, wrote on her Twitter account Tuesday that “one of the things that is hurtful about the extent to which reprimand is sought of Ilhan is that no one seeks this level of reprimand when members make statements about Latinx + other communities during the shutdown, a GOP member yelled “Go back to Puerto Rico.”

According to Pressley, the Democratic Party needs to get “equity in our outrage.” The resolution was discussed in a closed-door weekly meeting for the House Democrats in the Capitol.

Senator Bernie Sanders, one of the first to speak up, stated that “Anti-Semitism is a hateful and dangerous ideology which must be vigorously opposed in the United States and around the world. We must not, however, equate anti-Semitism with legitimate criticism of the right-wing, Netanyahu government in Israel,”

According to Arizona Representative Raul Grijalva, “there is a double standard we have to be aware of. The level of condemnation on Ms. Omar has been really intense.” Adding that representatives are responsible for their statements and consequences, but the attacks against Ilhan Omar were “intense.”

Ilhan Omar has been under attack for criticizing Israel’s overt influence on the United States politics, suggesting that members of the U.S. Congress support Israel because of money they receive from the pro-Israel lobbying groups.

This began a smear campaign against Omar, who dared to speak out on an issue many veteran politicians, whether from Democratic party of Republican, never brought up. The smear campaign exposed an Israeli-driven narrative that rejects any difference between anti-Semitism and legitimate criticism of Israel which resulted in mounting pressure against Omar that not only was she made to apologize, but also U.S. President Donald Trump called on her to resign from the Congress. Many found that ironic given the fact that many have been calling on Trump to resign for years over more serious racist and xenophobic.