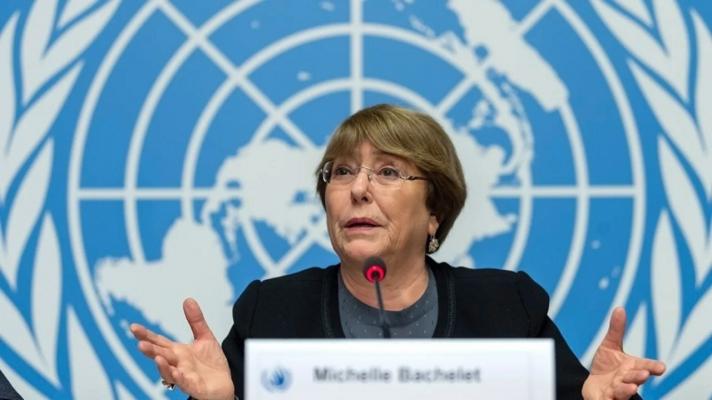 During the opening of the 48th session of the United Nations Human Rights Council This Monday, September 13, UN High Commissioner for Human Rights, Michelle Bachelet, presented a summary of the latest report on Venezuela. In her presentation, she asked all countries that have imposed “sectoral sanctions” against Venezuela to lift them, arguing that these measures have aggravated the humanitarian and economic situation of the population.

“The pre-existing humanitarian and economic situation was aggravated both by the COVID-19 pandemic and by sectoral sanctions, further limiting access to basic services,” read Bachelet’s statement. “I reiterate my call for these sanctions to be lifted.”

This is not the first time the UN top diplomat has questioned the economic sanctions imposed on Venezuela. Regardless, analysts continue to criticize her unwillingness to roundly denounce the so-called sanctions—defined in international law as unilateral coercive measures—that in reality constitute a violation of the United Nations Charter that Michelle Bachelet is supposed to enforce. She is not denouncing the illegal imposition of sanctions, she is simply “asking” for sectorial sanctions to be lifted, explained an expert in international law to Orinoco Tribune.

On a previous occasion, the United Nations Special Rapporteur on the negative impact of unilateral coercive measures on the enjoyment of human rights, Alena Douhan, had said that she viewed with concern the effects of sectoral sanctions on the oil, gold, and mining industries of Venezuela. These sanctions affect the national economy in its most critical sectors, since approximately 88.5% of exports are petroleum products.

Bachelet’s report says that to help mitigate the impact of the pandemic in the country, an equitable distribution of vaccines must be ensured. Currently, Western countries continue to monopolize the purchase of vaccines, leaving the population of the countries of the Global South in a precarious situation. In the case of Venezuela, the blockade promoted by the United States government and the European Union has been decisive in hindering the national vaccination plan.

Bachelet also reported that on Friday, September 10, the agreement between the Office of the High Commissioner for Human Rights and the Venezuelan government was renewed, so that the UN team continues to work in the country, increasing the number of observers from six to 12.

Venezuela questions the report
In a message posted on his Twitter account, Felix Plasencia, Venezuelan Minister for Foreign Affairs, issued an official communiqué and highlighted that “Venezuela takes note of the report published by the Office of the United Nations High Commissioner for Human Rights that ratifies the perverse effect of the Unilateral Coercive Measures.”

The document remarks that Bachelet’s report confirms the devastating effects of the coercive measures imposed by Washington on Venezuela since 2014. Among these effects are the “the decrease of 99% of the national income, as well as the existence of elements to consider that such measures imply the commission of crimes against humanity.”

Plasencia also mentioned that Venezuela regrets that the report “reproduces methodological flaws from previous documents of the Office and incorporates unsubstantiated assertions, which have not been verified with State authorities.”

In particular, it rejects the “the false assertions in the report regarding alleged arbitrary detentions or persecutions for the exercise of defense of human rights, as they are part of the political script of those who use this matter to attack Venezuela.”

Below is the official translation of the statement by Venezuela’s Ministry of Foreign Affairs:

The aforementioned document reaffirms the devastating effects of the unilateral coercive measures adopted by the government of the United States of America against the country as of 2014, including the decrease of 99% of the national income, as well as the existence of elements to consider that such measures imply the commission of crimes against humanity, in accordance with the provisions of the Rome Statute and in harmony with the Referral made by Venezuela before the Prosecutor of the International Criminal Court.

However, it is unfortunate that the aforementioned report replicates the methodological flaws present in previous documents of the Office and incorporates unfounded assertions, which have not been duly contrasted with the State authorities, as required by its own work methodology.

In this sense, Venezuela rejects the false assertions in the report regarding alleged arbitrary detentions or persecutions for the exercise of defense of human rights, as they are part of the political script of those who use this matter to attack Venezuela.

The Bolivarian Republic of Venezuela ratifies that it will continue to cooperate with the Office of the United Nations High Commissioner for Human Rights, on the basis of respect for the truth and the principles of objectivity, non-selectivity, impartiality, non-interference in internal affairs and constructive dialogue as a mechanism to raise the truth of Venezuelan before this body.

For this purpose, it has been agreed to renew the Letter of Understanding between Venezuela and the Office of the High Commissioner for a period of one year, increasing the presence of officials of the Office in the country and expanding the areas of technical assistance and cooperation. The Bolivarian Republic of Venezuela ratifies its unwavering commitment to guarantee the full enjoyment of human rights as the only path to achieve peace and tranquility for the Venezuelan people.