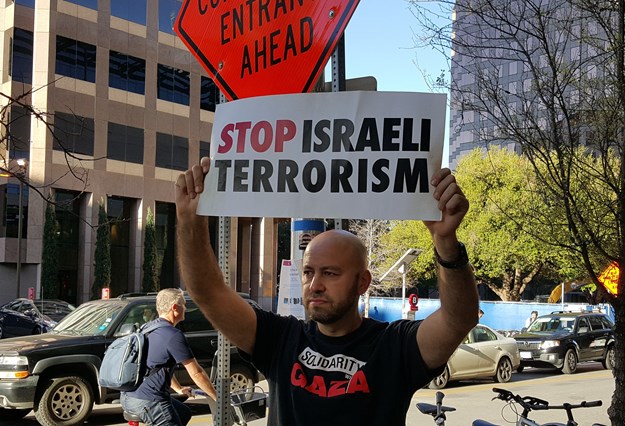 Editorial note: We do believe this piece is important to disassemble the zionist smear labeling everything against zionism like anti-semitic, but we do not share Khalil’s opinion on the Zionist responsibility on the war in Iraq

I am not contributing anything new: to be anti-Nazi is not to be anti-German, quite the contrary, it is to save the German people, Europe and the human race itself.

I am not bringing anything new: being anti-Zionist is not being anti-Jewish; and saying that to be anti-Zionist is to be anti-Jewish, is a great rotten strategy, of sophisticated repression and submission. It is despotic, it is arrogance only characteristic of western white supremacy, it is a sadistic and perfect morbidity, it is a mockery and humiliation of generosity, an attack on the values of human freedom. I still don’t contribute anything new.

We are in the 21st century and the atrophy of colonial anachronism still exists in our historical time. The Israel that was imposed from Europe and by Europeans in 1948 on historical Palestine through the Zionist movement, is nothing more than classic colonialism. Now in classical colonialism, the colonizer takes the land to plunder the resources, enslaves the native and destroys, denigrates, despises it’s history. The peculiarity of EuroZionist colonialism is that it not only takes the land but also takes the history of the native people, and this particularity is due to the fact that said colonialism does not come from a people, as in the classic colonialism, but from a project, which consists in becoming a people, and that is why it takes the history of the native people to justify its colonization. History is falsified, through a refined and intellectual academic splendor, with a narrative pleasure: The people that after 2000 years returned to their ancestral land. A whole fraud, under a fascinating aesthetic mantle, loaded with epic elements.

The Semitic Palestinian Canaanite people can disappear, a civilization of about 18 thousand years of history, 11 thous years of written history. Making the Palestinian people disappear is the nature of the Zionist project. The -Extermination- and End of the native people. The Palestinian people became a forbidden people. The Palestinian people are not only expelled from their original land but also expelled from history. The Palestinian people are not the only people they expel from History but they are the only people in which the colonizer appropriates their History. They cleverly use the religious archive, Jewish-Christian-Muslim monotheism (Arab heritage), as a birth certificate. We observe, Azkenazi Europeans, that is to say, the European of Jewish religion, of Indo-European ethnicity, that does not keep any root with the Semitic ethnicity, in which more than 80% of the Jewish world population is of European origin and they request Historical rights in Palestine, this would be like the equivalent of Indonesians (not Semites) who represent the largest Muslim population and request historical rights in the Arabian Peninsula today, the cradle of Islam.

Culturcide against the Arab world, to make Arab identity disappear

Zionist colonialism is not only limited to the Palestinian people, it is also an expansionist colonialism, the project of the greater Israel, to continue colonizing other Arab territories. In fact it is not in vain that said colonial anachronism does not yet have a National Constitution, precisely so as not to define its border lines. Its stability is sustained in destabilizing the region and this can be stigmatized as Manichaeism, but it must be understood, this colonialism is the same as the American empire and is European colonial sentiment and sense. The Zionist movement is an invisible empire. The imposition of Zionist colonialism in Palestine is the axis of the catastrophe and tragedy of the Arabo-Persian-Kurdish peoples. From the Campbell-Bannerman Report (1907), a British study to perpetuate the empire, the Syke-picot Agreements (1917), the Franco-British colonial division of the Arab territories, the Balfour Agreements (1917), the British Empire grants its Palestinian colony to the European Zionist movement. The Palestinian people may disappear.

The Zionist movement is a perverse genius, it is a talent of aesthetic splendor and that element manages to subdue, repress, silence or self-censor great voices. The aesthetic serves to alienate, to subdue and it is feared.

The macabre invasion of Iraq by US imperialism was a 100% Zionist lobby project. Divide the fruitful Arab mosaic, its Arab diversity into sectarianism, that they kill each other in order to subdue and dominate them, an example was Lebanon. The recent history of the Arab popular revolts were kidnapped for the benefit among others of Zionist colonialism. The Coco Chanel Gulf dictatorships and other Arab dictatorships are clear that joining Zionist colonialism is a logical equation to perpetuate themselves in power, thus distancing the Arab multitude from the democratic dream.

The Palestinian Authority was caught between ineptitude and corruption, did not develop a vanguard, magnificence of international jurisprudence and is today an instrument of Zionist colonization. They gave up the armed struggle, the legal and even the cultural struggle. Mahmoud Abbas is the most sinister and obscure in internal Palestinian history. The Palestinian people may disappear.

Zionist colonialism not only needs the end of the Palestinian people but also threatens the Arab-Persian-Kurdish world. There is the project of greater Israel. Today to support pseudo-Islamic terrorism, to fragment the Arab Nation State, and create religious republics, end the Arab identity and thus justify itself as a Jewish State. A State of the Jewish religion in our current secularism and secularism of the 21st century.

The reports of the UN Blue Helmets record the training in the Golan Heights of terrorists by Israeli colonialism against Syria. The destruction of the historical heritage by the terrorists, as a plan to end the memory, there is a culturicide against the Arab world. Not to mention the disappearance of more than eleven thousand Syrian children and the large organ trafficking in which the Zionist mafia is the great operator worldwide.

In Africa, international Zionism sustained many dictatorships. Its support for Apartheid in South Africa, even creating all the nuclear war infrastructure, which Mandela immediately dismantled. The Haaretz Daily documented how Zionism contributed to the murder of one million Rwandans in the genocide of that country. International Zionism is an apparatus of genocide through civil wars in Africa, to obtain gold, diamonds and arms sales. It owns governments within governments, its devil genius operates from the capitalist plutocracy.

In Latin America, international Zionism was also a support device for dictatorships and a provider of many torture services. Sexual amputation of Chilean and Argentine women; they had hatcheries of hungry rats and then they used them to eat the vagina of those women who fought against the dictatorship.

In Burma, Zionism sells weapons and training for genocide against the Muslim population, undertaken by its president, Aung San Suu Kyi.

The list of the horrors of international Zionism is long and the one that remains to be disseminated is longer. Zionism is an attack not only against the Palestinian people, but also against humanity.

The intellectual academic clergy a secular inquisition
The tragedy and painful shame of the European Jewish Holocaust, Europeans against Europeans, has benefited Zionist Eurocentrism, a bizarre reproduction of fascism, this is a torment in the human soul … There has been no free debate as there is a whole sophisticated power of repression where “I must eat, feed my children”, that is, guarantee a salary, therefore, “I must be objective.” Objectivity is self-censorship, outrage, an effective intellectual repression in a can. We are facing great talents and geniuses, attractive figures but who are not necessarily honest, rather their potential talent ends at the service of Zionism, guaranteeing their comfort, their celebrity, personal interest, ego, fear etc. Even figures from the Arab world including Palestinian figures. The Palestinian people may disappear.

To secularism and Western secularism, what are the Jews a people or a religion?
Racism

Being an anti-Zionist is a difficult birth of human liberation. King Leopold II of Belgium killed between 8 and 11 million Congolese African blacks and there are monumental statues in Belgium in his honor. The colonization of the American continent, Abya Yala, implied a minimum slaughter of 70 million indigenous people and in Spain statues of genocides like the navigator Hernán Cortés are re-inaigurated, statues even where the navigator proudly has his feet on the head slaughtered of an indigenous .. .but to the European Jewish Holocaust, the slaughter of the white against the white, of the European against the European, there is forgiveness and memory, but it does not exist for the other peoples. This feudal Zionist Eurocentrism is a stormy racist obscenity of our Historical time.

Mahatma Gandhi launched a concrete action, the boycott (which is not the same as sabotage) to combat British colonialism, the American Jewish community appealed to the boycott to fight the Nazi regime, also Rolihlahla Mandela instrumentalized the boycott to combat Apartheid in South Africa.
The BDS Movement (Boycott Divestment and Sanctions), is a concrete and effective light of global popular action against Israel’s colonial and genocidal anachronism and its Zionist world power. Mentioning BDS, is not to remain in the entelechy, it is to go to the real and honest action.

This is why the bloodthirsty racism of the European governments, American and Canadian, need to criminalize it and once again as a method of censorship, silencing, oppressing, repressing, submitting. And give the colonial regime more time to materialize its ethnic cleansing against the native Palestinian population.
The BDS is an alternative of non-violent struggle, vital to guarantee the existence of the Palestinian people and is an instrument to combat international Zionism entrenched in the corporatocracy and bank establishment, deeply inhuman.

Despite the deep tyranny of the international order, despite the fear that the Palestinian people will disappear, I feel that the fight against Zionism will come from the bowels of humanity, it must be the mission of our Historical time. I do not believe in two States, that is a colonial modality, I believe in a single State in which we live together Palestinians and Israelis, with equal rights.

The Jews with their Zionism ended up betraying the memory of the Holocaust, paraphrasing the Greek tragedy, we reproduce what we hate. That the liberation of the Palestinian people against the colonial yoke implies in itself the future of a better world, to free ourselves from our human misery. I am anti-zionist and I never will become a Zionist, it is my lonely pact with humanity in the face of Greek tragedy.