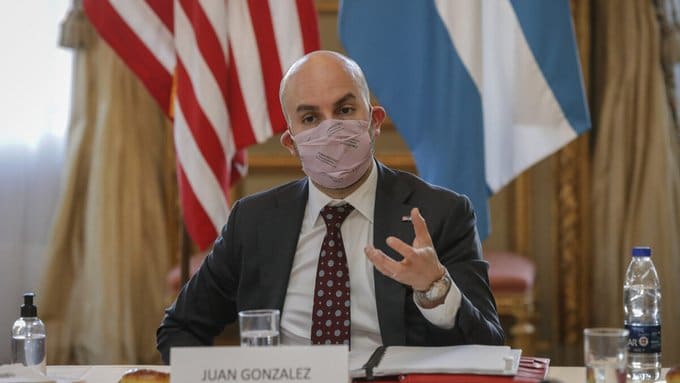 A new plot around the continuing illegal detention of the Venezuelan diplomat Alex Saab seems to be underway, judging from statements by Juan González, the Colombian adviser to US President Joe Biden, who serves as senior director of the White House National Security Council for the western hemisphere.

In an interview he gave to the Colombian radio station La W Radio, González remarked that he was certain that the US administration is on solid legal ground in its actions against Saab, despite the countless elements of illegalities in his arrest and detention in Cape Verde that have made numerous legal experts in Venezuela and abroad label his case as abduction.

The White House official informed during the interview that the Biden administration is waiting for the Cape Verdean authorities to issue a verdict in the coming weeks. He also asserted that the procedure must take place in accordance with the law and without political pressure. However, contrary to his assertion, the US is itself engaged in coercing Cape Verde’s compliance in this case. In December last year, the US sent its navy cruiser USS San Jacinto to the international waters of the African island nation, claiming it to be a preventive measure against any possible rescue attempt for Saab carried out by Venezuela or its ally Iran; but international analysts considered this measure to be ”old-fashioned gunboat diplomacy” to threaten Cape Verde to comply with US orders.

However, González stated in his responses to the Colombian station that, regarding Alex Saab, “we have a fairly strong case and he should be extradited,” disregarding the fact that the Swiss prosecutor office in charge of opening an investigation against him under US request, dismissed the case a few month ago for lack of evidence.

This comments reflects the policy of coercion that Washington has maintained since the illegal arrest of Saab, on June 12, 2020. Therefore, there is political evidence that points to a punishment against the task carried out by the special envoy of Venezuela to overcome the economic and commercial blockade.

What is Cape Verde playing at?
Given the recent pronouncement by the United Nations Human Rights Committee, stating that Cape Verde must suspend the extradition process of Saab, the diplomat’s lawyers condemned the African country’s utter disregard towards the UN body.

RELATED CONTENT: The Case of Alex Saab: US Abduction of Venezuelan Diplomat, a Global Challenge

”Such a position is alarming, and it is a legal, strategic and ethical mistake,” expressed Alex Saab’s defense team in a statement, making reference to the Cape Verdean Attorney General’s claim that the United Nations Committee lacks jurisdiction in the case.

For its part, the United Nations Human Rights Committee maintains its decision, originally issued at the beginning of June, that the Cape Verdean authorities must guarantee necessary medical attention to Saab and should refrain from extraditing him to the United States.

Before the preliminary decision of the United Nations Committee came, the Court of the Economic Community of West African Countries (ECOWAS) had already ruled in favor of Alex Saab, ordering Cape Verde to free the Venezuelan diplomat and pay him compensation. ECOWAS decisions are legally binding on Cape Verde, as the country is a member of the African regional body.

More than a year after Saab’s arbitrary detention in Cape Verde, political analysts maintain that there is no legal case against Saab, and his continued confinement—now as house arrest—is an example of abduction. According to multiple analysts and legal experts, the abduction and extradition trial of Saab is part of the interventionist policy of White House to overthrow the legitimate government of Venezuela through economic and financial pressure. Saab’s case is not unique; rather it is one of the many cases that the US government is carrying out at present in prosecuting its own nationals and even foreigners outside the US territory for political reasons; notable examples being the cases of Julian Assange (Australia), Mumia Abu Jamal (USA), Mun Chol Myong (North Korea), and Meng Wanzhou (China).