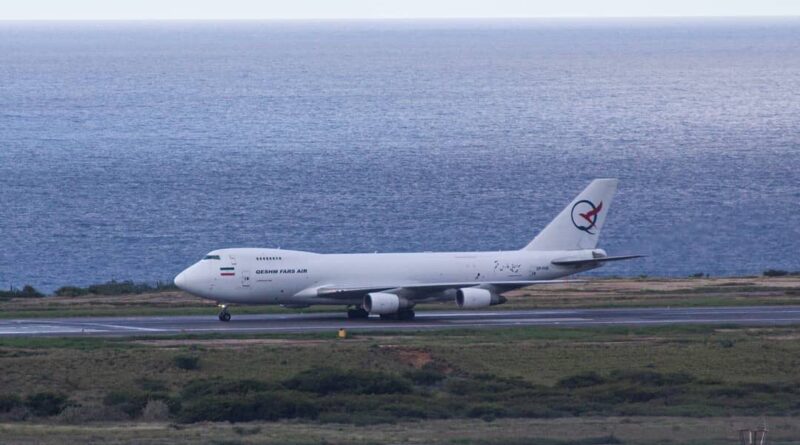 This Wednesday, October 28, during a press conference offered by the President of Venezuela, Nicolás Maduro, to national and international media, the journalist of the Bloomberg agency, Alex Vázquez, asked the president about the alleged landing of an Iranian plane sanctioned by the United States in the city of Caracas. Vázquez was refererring to a Boeing 747 from Qeshm Fars Air (EP-FAB) spotted on Tuesday in the Simon Bolivar International Airport serving Caracas.

“They come from all over the world. Airplanes always arrive from the United States and nobody asks what for. They come to bring passengers, goods, products. Many medicines have come on Iranian planes. We bought them in Asia and brought them through Iran. Also spare parts to fix the refineries,” said the head of state.

Regarding the accusation made by the president of Colombia, Iván Duque, about an alleged purchase of missiles by Venezuela from Iran, Maduro replied that it seemed like a very good idea, as he did a few weeks ago.

A great photo from El Pitazo showing the Qeshm Fars Air (EP-FAB) in Caracas Maiquetia, showing the cargo being offloaded on pallets, although I can’t tell exactly what the cargo is (I don’t think it’s missiles)#Venezuela #Iran pic.twitter.com/rOTKYylXNu

“The president of Colombia, Iván Duque, in his role as a puppet of the intelligence agencies of the United States, uttered a sort of statement that Venezuela had bought missiles from Iran. And I answered that it was not so, it was not true. But it seemed like a very good idea to me, because Venezuela can buy bullets, rifles, tanks, planes and missiles from the country it wants, be it the United States, be it Colombia, Iran, Russia, China, India, the country that wants to sell to us,” said the Venezuelan president.

“I told Iván Duque that it seemed like a very good idea to buy missiles from Iran. Iran can sell them and we can buy them. In due course we will see the Iranian offer. And if we are going to buy them, I will make the decision and buy them,” he said.

The head of state stressed that between Venezuela and Iran there has been, for many years, a “deep, spiritual, political and cultural brotherhood.”

The question, specifically, had to do with the statement issued early this week by the US “envoy to Venezuela”, Elliott Abrams, according to which the Donald Trump administration plans to “eliminate” any weapon of these characteristics that reaches our country.

Finally, with regard to the alleged meeting of a US official with the Minister of Communication, Jorge Rodríguez, in Mexico City, in order to negotiate a “departure from power” on the part of Maduro, the President indicated to the journalist: “No comment. Let what will happen in the United States pass and I assure you that I will hold a press conference just for you and I will answer you.”

Last week President Maduro, when asked about that Bloomberg report, answered: “Yes Jorge Rodriguez is negotiating my exit, yes, my exit to the beach” in an ironic tone.