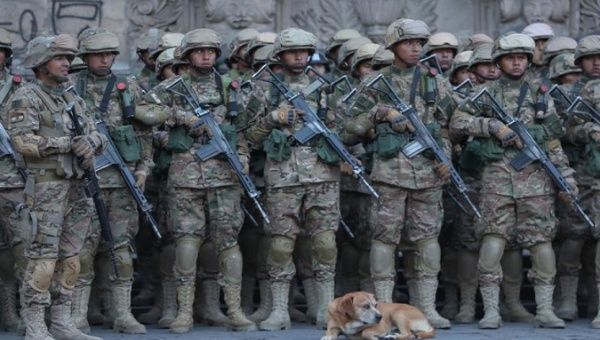 The military academy created was renamed by the coup government in honor of the assassins of internationalist hero Ernesto “Che” Guevara.

The anti-imperialist school that Evo Morales created in the Armed Forces of Bolivia in 2016 has been renamed Friday to Heroes of Ñancahuazu, after the Bolivian military unit that killed the revolutionary figure Ernesto “Che” Guevara in 1967.

“Bolivians are not anti-anything,” Bolivia’s Interim Defense Minister Luis Fernando Lopez declared to media in La Paz, while explaining that the anti-imperialist orientation with which Morales launched this academy in 2016 “did not fit with military doctrine.”

“Under that anti-imperialist concept, foreign doctrines are generated,” he added, something that “has nothing to do with the spirit of Bolivians.”

The General Juan Jose Torres Anti-Imperialist Command School installed in the Bolivian city of Warnes did not provide “any type of function that will contribute to the Armed Forces,” the official added.

The training center was integrated into the Military School of Engineering with the new name. Yet this is just another attempt form the de-facto government to erase the legacy of Evo Morales and the social and cultural progress made during his mandate, as in the case of the burning and dismissal of the Indigenous Wiphala flag.

The de-facto President Jeanine Añez, after coming to power last November in a violent coup, said the government would replace “ideological educational instances” that in her opinion “did not contribute any education” to the Bolivian military.

The statements of the Minister of Defense were made during the presentation of a military and police device to strengthen security for Jan. 22 when Bolivia celebrates Plurinational State Day.

Featured image: The statements of the Minister of Defense took place during the presentation of a military and police device to strengthen security for the next day 22nd, when Bolivia celebrates Plurinational State Day. | Photo: La Prensa Latina