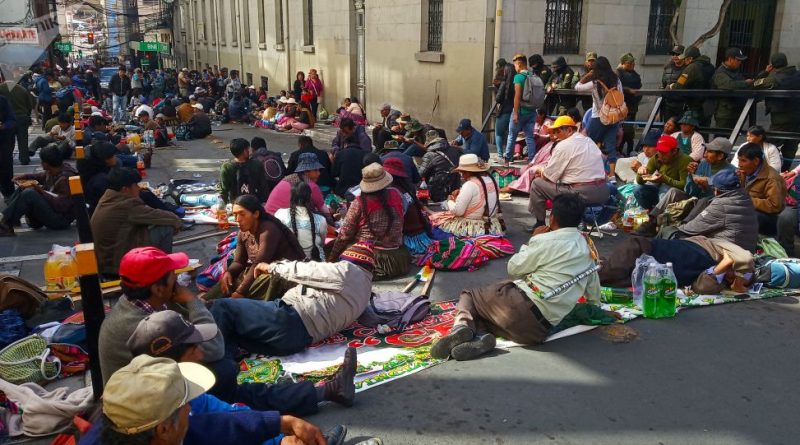 Peasant, indigenous, mining and urban movements have declared themselves in a state of alertness and vigilance in La Paz. They surround the government headquarters permanently before what is an open call from the opposition not to recognize the election result of October 20, the government and the OAS audit.

“We are going to hold vigils until the last consequences, we have organized the twenty provinces and we are going to stay until it is resolved because our vote has to be respected,” says Graciela Mamani Tapia, of the National Confederation of Peasant Women Bartolina Sisa, one of the main social organizations in the country.

Mamani Tapia has arrived in La Paz in a national mobilization to defend the electoral results of last October 20, which gave Evo Morales the win. This defense is mounted in two main ways: the audit with the presence of the Organization of American States (OAS) and the street, that is, the dispute over public space. RELATED CONTENT: OAS at the Vanguard of (Ongoing) Coup in Bolivia

“We are here to protect the seat of government, we are angry, we are upset because Carlos Mesa does not want to allow our votes to count, we have our rights, our votes are valid, we have won by more than 10%,” explains Mamani Tapia. There are thousands next to her, to defend democracy that, she says, has cost them “blood and mourning” to get.

Thursday’s mobilization is massive and centrally nurtured by those who have come from rural areas. It happens in a scenario of a rising coup threat where, even with the presence of the OAS and the calls of the government, the opposition maintains its call for new general elections or for Evo Morales to resign. “It is a great concentration, we are in defense of our vote, in defense of our winners who are Evo Morales and Álvaro García Linera, we are going to be respected and we are going to defend these until the last day because we live in a dignified and sovereign country with democracy”, says Henri Nina, executive secretary of the Confederation of Trade Unions of Intercultural Communities of Bolivia, another of the main organizations in the country. Mobilizations not only occur in La Paz. Movements such as Intercultural Communities – which brings together producers and small producers from the west, tropics and east – as well as Bartolina Sisa have organizations in much of the country and have been carrying out actions, for example, on roads.The climate of tension is also crossed by what is perceived by the emergence, again, of a discriminatory and racist message on the part of the leaders of the opposition and part of those who mobilize around an order that covers diverse points such as the complaint of fraud, the request for the government’s resignation, and a violent message.

“We had thought that racism was over, that hatred for the peasant class, but it continues to exist, they have left us messages like ‘out of Bolivia shit Indians’, that can’t happen,” says Nina.

The decision of the movements is to stay on the streets: “We have declared ourselves in emergency and permanent vigil, we will peacefully defend our rights, our votes, we will wait with peace and tranquility, why doesn’t the right lift its blockade?”

The pulse remains between the opposition’s strategy to press on with the rejection of the OAS audit and the certainty of the movements to defend what they have won. The streets are the space where part of that stage of attempted coup and resistance to it is developed. La Paz prepares for a night of wakefulness and alertness.