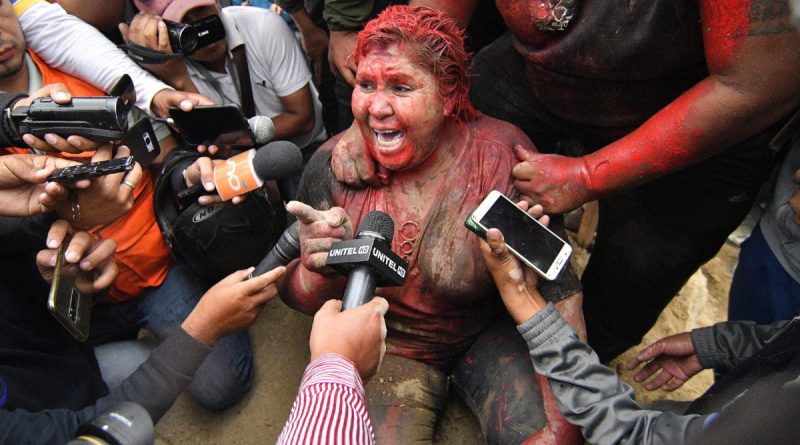 Right wing protesters used as an excuse against the mayor, the death of two protesters in clashes that happened in another town. The woman was forced to resign on her knees after she was spray painted with red and subjected to hours of humiliation.

The mayor of the Bolivian town of Vinto, near Cochabamba, was assaulted and humiliated by a mob of angry protesters who blame her for the death of two protesters in neighboring Cochabamba, The Daily Mail reported.

Protesters blocking the bridge to Vinto on Wednesday marched to the city hall after rumors spread that two people had died in protests in the neighboring city. The ferocious mob dragged the mayor, Patricia Arce of the governing MAS party, out of the hall, spray painted her red and chopped off her hair while chanting “Murderess! Murderess!,” according to The Daily Mail.

Bolivia mayor Patricia Arce has hair forcibly cut, dragged in the streets, office set on fire by crowd of protesters accusing her of ferrying President Evo Morales’ supporters to break a blockade they had set up & reported deaths, one of which was later confirmed. pic.twitter.com/xNRJWRCqE3

The woman was forced on her knees to sign a resignation letter before being paraded across town for hours. Following four hours of humiliation, Arce was driven away by regional police, the report says.

In the meantime, protesters set fire to the town hall.

Protests in Bolivia are fueled by presidential candidate Carlos Mesa who has called the vote count in the recent presidential election a ‘fraud’. Evo Morales of MAS won the election with a reported almost 11 percent advantage over Mesa, which allowed him to become president without a second round.

RELATED CONTENT: Solidarity With the Government and People of Bolivia in the Face of the Coup Threat

Following reports of the protester’s deaths, Evo Morales tweeted his “deep regret” over the incidents, describing the dead student as “an innocent victim of violence promoted by political groups that encourage racial hatred among Bolivian brothers.”

Opposition leader Luis Fernando Camacho called on the military to join the protests to oust Morales, the Mail says. Speaking at a naval ceremony on Wednesday, Morales said that the military must “serve the people” and support the government.

In Venezuela the anchors of the TV show “Zurda Conducta” just arriving from a trip to Argentina and Bolivia, said that the mayor should become a symbol of resistance and women’s strength because in a video the mayor defended her position of support for Evo Morales disregarding the fascist mob threatening her life and humiliating her.