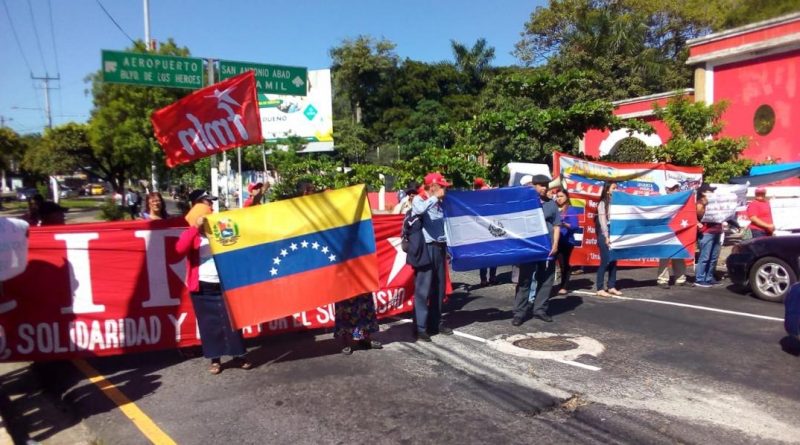 Social movements in El Salvador remain posted on Wednesday in front the Venezuelan embassy in this Central American country, to prevent a possible occupation of the diplomatic compound, similar to the action that took place in Washington six months ago.

The protectors are responding to the recent expulsion of diplomats from the Bolivarian government by order of President Nayib Bukele, to which Venezuela responded with a reciprocal action.

The vigil was created here by the Defense Committee of the Embassy of the Bolivarian Republic of Venezuela, consisting of social organizations, student organizations, trade unions and professional associations.

Members of the Intergremial Coordinator Rafael Aguiñada Carranza (CIRAC) yesterday closed the vehicular passage in front of the main entrance of the UES for a few hours, in protest of President Bukele’s decision to break diplomatic relations with Venezuela.

The organization, which brings together various social and union representations, strongly condemns and rejects Bukele’s servile actions seeking to undermine the good relations we have with Venezuela.

“We remain in resistance and in defense of the dignity of the Venezuelan people who heroically resist with courage and patriotism the brutal and inhuman economic blockade of the Washington government and its right-wing puppet governments,” added youth leader Daniela Genovez.

Salvadoran groups have concentrated in front of the diplomatic headquarters of Venezuela to show solidarity and gratitude for the social programs that benefited the neediest families.

“We recognize the constitutional legitimacy of President Nicolás Maduro mobilized to guard the embassy,” the lawyer told Prensa Latina.

Bukele’s decision was criticized by the Salvadoran opposition. An important representative of the opposition party of the former leftist guerrilla of the Farabundo Marti National Liberation Front (FMLN), Nidia Díaz, condemned “a policy servile to the US empire.”

Since Bukele came to power, relations between El Salvador and the United States have strengthened and in September they signed an asylum agreement, following similar Washington pacts with Guatemala and Honduras.

Last May, in Washington, the Embassy Protection Collective defended the headquarters of the diplomatic representation of Caracas in the United States for weeks before the authorities tried to occupy the property in a clear violation of international and diplomatic law.

Venezuela broke ties with the US after the White House administration recognized Guaidó as “interim president.”