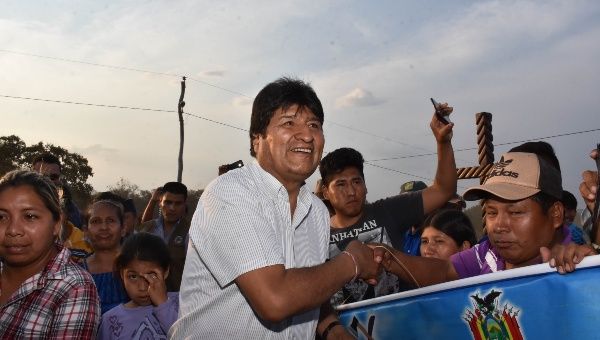 “I call on young environmentalists, farmers and social organizations to implement a recovery plan for locals in the affected areas. #UnityinAdversity”

Bolivia’s defense minister Javier Zavaleta announced on Wednesday afternoon, that the hotspots for the Amazon fires in Bolivia have been reduced by 85% in the past eight days. Bolivia’s government has mobilized a huge air operation, involving helicopters, planes and the ‘Supertanker’ to combat the fires that have raged in the country.

“More than 85 percent of the hotspots have been extinguished in almost eight days of operations, therefore, the fire is definitely receding, and we are already attacking specific places from air and land. So we hope the fire will continue receding” said Zavaleta, speaking at a press conference on Wednesday.

He continued, “The large expenses [of operations] are being covered by the Bolivian state with our budget and our own resources, but we still welcome any help (…), now that the fire is in retreat, we have no reason to return to the height of what the fire was. We used to have more than 8,000 fire hotspots we are now at less than 1,000 hotspots”

Nevertheless, challenges remain. Zavaleta also said that fire had been detected near San Ignacio in the Chiquitania area and that the President will be visiting the area shortly to help coordinate operations.

In response to the news. President Evo Morales called for a new phase of operations to begin, asking for others to work with the government to help recover what has been lost. He said “I call on young environmentalists, farmers and social organizations to implement a recovery plan for locals in the affected areas. #UnityinAdversity”

One part of the recovery plan is the announcement on Tuesday evening that buying and selling land in the affected areas will be banned, so as to stop agro-capitalists profiteering from burnt areas, to allow for regeneration of the forest.

The UN has praised Bolivia’s leftist government for the scale of the operations they have mobilized to combat the fires. This includes contracting the world’s largest air tanker, the Boeing 747 ‘Supertanker’ too led efforts to extinguish the fires. Along with sending troops, firefighters and veterinarians to reinforce operations.

Meanwhile, far-right Brazilian President Jair Bolsonaro has been slammed for inaction in the face of the devastating fires.