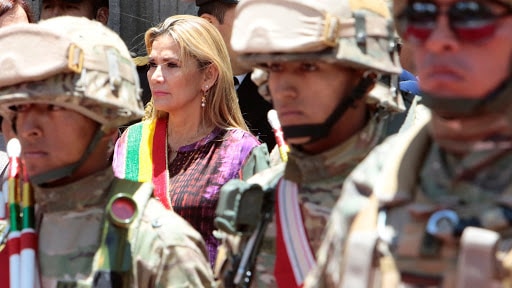 The “de facto” government of Bolivia threatens to imprison members of the Supreme Electoral Tribunal (TSE) if they do not annul the legal status of the Movement to Socialism (MAS).

“If they act in this way, sooner or later they will end up in jail if they do not annul the legal entity (MAS), ” said the coordinator of Social Movements of the de facto government, Rafael Quispe, on Monday .

Quispe also stated that if the Supreme Electoral Tribunal ( TSE) does not proceed to annul the status of the MAS, it will incur a criminal offense for breach of its duties.

The regime's party says that Luis Arce has 'breached electoral law' by mentioning a recent poll. However, the law on polling only comes into effect once the electoral calender begins on July 24th. pic.twitter.com/VYz5jGWDci

Bolivia’s news agency Kawsachun News reported on this incident of the alleged breach of the electoral law by Luis Arce for mentioning recent polls which has no legal ground because the Bolivian “law on polling only comes into effect once the electoral calendar begins on July 24th.”

MAS defended itself against such allegations by the de facto government and asked the TSE to act impartially in the face of pressure. Likewise, he stated that his candidate did not disseminate any survey and pointed out that he only limited himself to answering the question that was asked in an interview, without offering more information about it.

It is not the first time that the interim government tries to cancel the legal status of MAS and, with it, to exclude the presidential candidate of that political party from the September 6 elections.

In this sense, at the beginning of July, the de facto government accused Arce, economy minister while the deposed president Evo Morales held power in Bolivia, of irregular purchases during his administration.

Morales denounces right wing “legal war” for the elections
Jeanine Áñez proclaimed herself President of Bolivia after Morales presented his resignation in November 2019 after the coup orchestrated against him by the opposition, who ignored his re-election in the presidential elections of October 20 of that year.

On January 19, the former Bolivarian president elected his party’s presidential binomial, MAS, for the presidential elections, that is, Arce and former Foreign Minister David Choquehuanca, in order to compete for the Presidency and the Vice-presidency, respectively; however, the de facto government of Áñez has carried out a series of investigations for alleged diversion of resources during Arce’s term by various public institutions.

All recent polls indicate that MAS’s Arce will win the elections scheduled for September 6, even in the case of an alliance between Carlos Mesa (currently running in second place) and Jeanine Anez in third place according to polls.