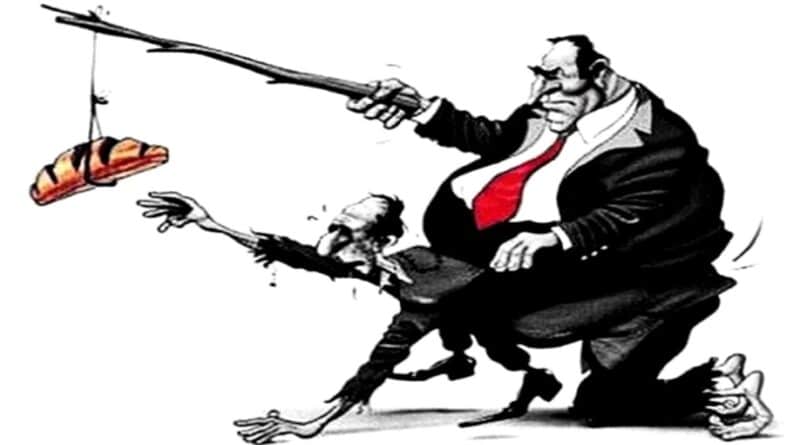 All of us who work in public administration have also seen our salary drop by 97% since August 2018 as a consequence of induced hyperinflation. We are university professors, doctors, administrators, bio-analysts, maintenance personnel, drivers, judges, soldiers, police, electricians, etc. We are 3,555,155 people in addition to the 4,988,882 grandmothers and grandfathers who receive their pension and / or retirement. We are a lot of people.

From the “Carmelitas” Corner (BCV headquarters), trapped in monetarist dogma, they say that it is inappropriate to increase wages in the public administration. They allege that there are not enough resources in the budget. They are the same people who are determined to “balance” the fiscal accounts by superimposing the economy over the social. To do so, they suggest cutting public investment and spending. Of course, in their orthodox paradigm, they do not even walk around the idea of increasing public administration revenues instead of cutting spending.

Here in Venezuela, as in any country in the world, the financial resources of public administration come in theory and mainly from taxes. It is the case that the bourgeoisie in this country does not pay taxes despite the exaggerated profits it has recorded and continues to record even in times of economic war. Let’s recall that according to data from the BCV, in 2013 from all the economy’s production 40% went to the accounts of the capitalist and in 2017 this percentage increased to 50%, that is, the bourgeoisie, by way of profit, is appropriating at least half of national production, to the detriment of wages that went from 32% to 18% of GDP during the same period.

The tax collected in our country has historically been low. From 1970 to 1991 it did not exceed, on average, 5% of GDP. From 1991 it began to increase and not precisely because the bourgeoisie began to pay more, but because that year VAT was approved, a tax that the vast majority and the working class pay every time we buy something. Taxes reached their highest level in 2014, 13% of GDP. Today, according to SENIAT, they do not exceed 9%. In Latin America it is greater than 20% and in the member countries of the OECD, the so-called developed countries, it is around 40%.

The worst thing is that, in addition to the low tax burden, that 9% is paid by the working class of this country every time we buy and pay VAT. The workers are the majority, we are 95% of the employed population. Of that 9% tax, 7 percentage points are VAT, only 2 points are income taxes that, to top it off, is also mainly pay by the working class as a “personal entity”. Let’s add the evasion and tax avoidance by some bourgeois with the current aggravating circumstance of transactions in foreign currency that have been the excuse for not invoicing and therefore not accounting for income, much less their profits.

According to data from the BCV, the bourgeoisie of this country has increased the degree of exploitation of workers in the midst of economic warfare by 247%. In 2014 for every bolívar that the capitalist paid in wages it earned 9, in 2017 that ratio from 1 to 9 went from 1 to 30, of course, to the detriment of wages. Not in accordance with this, they have paid less taxes than they historically paid and they spend it blackmailing the State so that it continues to give them currency. Meanwhile, it is the working class that, after having been alienated to a greater extent from the value of its labor force and having seen its purchasing power deteriorate due to criminal and induced hyperinflation, has been the one that has financed the State every time it buys and pay VAT.

To make matters worse, since 2018 and especially now in a pandemic, they (the capitalist sector) are asking for subsidies from the State to pay wages. Greater impudence is impossible. Let’s ask ourselves, where are the resources to finance these subsidies supposed to come from, but from the pocket of the employee himself when we pay VAT. In other words, not only have we seen our wages deteriorate due to an induced hyperinflation that has benefited the bourgeois, but we also give a good part of that wage to the State as VAT so that it, in turn, can give it to employers so that they can pay us our wages, meanwhile they pocket a growing slice of the wealth that, incidentally, we produce.

Is it now understood why there are not enough resources in the public budget to not only increase the wages of us workers in that sector to decent levels, but also to finance health, education, transportation, electricity, water and guarantee ourselves to the salaried class better provision of those services?

It is not a matter of lack of resources, the problem is that it is poorly distributed. Otherwise how are the intense activities and fruitful profits of the Caracas Stock Exchange explained.

Could it be that in the “Carmelitas” Corner they could review this matter of taxes, subsidies to the bourgeoisie and the salaries of public servants? Could it be that they could consider increasing the state’s income through income, assets and wealth taxes to the bourgeoisie until reaching a tax burden of 40%, instead of containing public investment and spending and in that way “balance” the fiscal accounts that concern them so much? There is enough room to maneuver, at least about 38 percentage points. Could they solve the problem of tax evasion and tax fraud?

In revolution and under siege by imperialism (excuse the redundancy) it is not the working class that must tighten its belt while the bourgeois loosens it more and more.