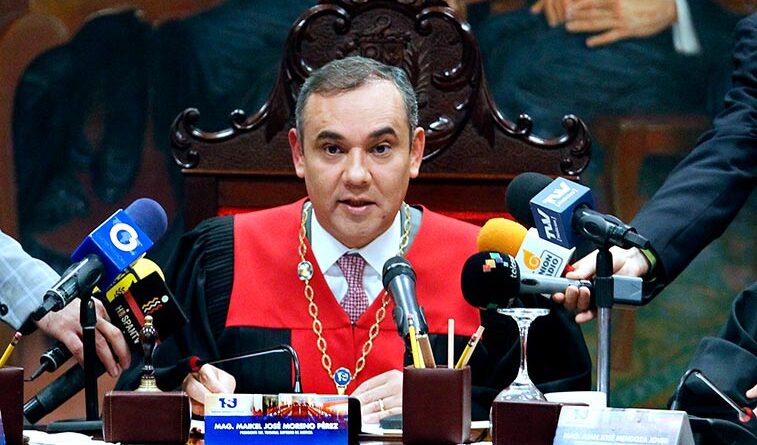 Once again, Donald Trump’s regime attacks Venezuela by announcing this Tuesday a reward of 5 million dollars for information that leads to the arrest and prosecution of the president of Venezuela’s Supreme Court of Justice (TSJ), Maikel Moreno.

The statement sent by the US Secretary of State, Mike Pompeo, says that he also sanctioned Moreno’s wife for being involved “in significant corruption” and stressed that she “had received bribes to influence the outcome on criminals and civil cases in Venezuela,” without presenting a single piece of evidence for these accusations.

Maikel Jose Moreno Perez, a Maduro crony, used his position of authority for personal gain, accepting bribes to influence the outcomes of criminal cases in Venezuela. In publicly designating him today, we are sending a clear message: the U.S. stands firmly against corruption.

For his part, the president of the Supreme Court of Justice (TSJ) of the Bolivarian Republic of Venezuela, magistrate Maikel Moreno, responded to the new US attackers — using his facebook page — ratifying his commitment and loyalty to Venezuela, as well as to the Venezuelan people, while also ratifying his autonomy and that of the Judicial Power, in the face of any interventionist claim that seeks to intimidate and deviate the course of the administration of justice, which is strictly governed by the postulates established in the (Venezuelan) Constitution and laws.

Faced with a new onslaught by the United States government against the highest authority of the Venezuelan Judiciary, Judge Maikel Moreno reiterated that such cowardly and unfounded accusations only strengthen his desire to continue working from the Supreme Court of Justice to continue offering an efficient and effective service that guarantees access to justice and due process to the country’s citizens.

“It is not the first time that the spokesmen of the US empire try to attack me, in their clumsy, desperate attempts, full of manipulations and lies, through which they seek to subvert democratic institutions and peace in Venezuela, but they will not be able to do so, because independence and the sovereignty of the homeland are not in dispute. I reiterate that the Venezuelan judicial power does not accept any tutelage of any foreign government, in our country our only debt is to the Constitution, the laws and the people,” he wrote.

Likewise, the President of the TSJ stated that he will keep waging his unwavering fight, within the scope of his powers, against the scourge of corruption in any of its forms, which has been one of his banner issues during his tenure as head of the Judiciary.

The most grotesque regime change operation ever. Now a bounty for Supreme Court chief, next a bounty for the Minister of Helth exemplary fighting Covid-19? But they allegedly are fighting corruption. Why don’t they start with their rotten corrupt US political system first? https://t.co/Cbt7sKh84X

Blockade and Sanctions
This is not the first time that the US government has announced rewards and launched accusations against leaders of the Venezuelan government. Since former President Barack Obama declared Venezuela “an unusual and extraordinary threat” in 2015, an endless number of sanctions and blockading actions against the country have considerably affected the development of the economy and the well-being of the people.

The hostile policy that the White House promotes regarding Venezuela has its beginnings long before Nicolás Maduro was sworn in as president of the Republic. The 2002 Coup d’etat against President Hugo Chávez and the destabilizing actions in the country during 2014 with the “La Salida” campaign by the ultra right and the violent demonstrations produced in 2017, sponsored and financed from the US, are some examples of the imperial struggle to force a change of government in Venezuela to control its natural resources, always assisted by an international media campaign that aims to legitimize these actions.

Last March 15, the United States government offered last million dollars for any information leading to the arrest of President Nicolás Maduro. It also offers $10 million for Diosdado Cabello, the president of the National Constituent Assembly (ANC); for the oil minister and vice president of the Economic area, Tareck El Aissami and many others State officers of Venezuela

Donald Trump’s government is promoting a block of sanctions to force the exit of the legitimate government of Venezuela, led by Nicolás Maduro. Sanctions include freezing the accounts and property of individuals, prohibiting transactions with them, confiscation of property, seizure of arms and travel bans. In addition, the United States applied additional sanctions to the oil, gold, mining, and banking industries. Currently, 31 tons of gold are at the center of a legal dispute between the Central Bank of Venezuela (BCV) and the Bank of England.

The economic and commercial blockade imposed by the United States government on Venezuela, among other consequences, limits the Venezuelan state’s ability to import basic goods such as food and medicine. The Minister of Popular Power for Foreign Relations, Jorge Arreaza, recorded a letter signed by President Nicolás Maduro before the International Criminal Court (ICC), by means of which he formally requested the start of an investigation into crimes against humanity that stem from illegal unilateral coercive measures.