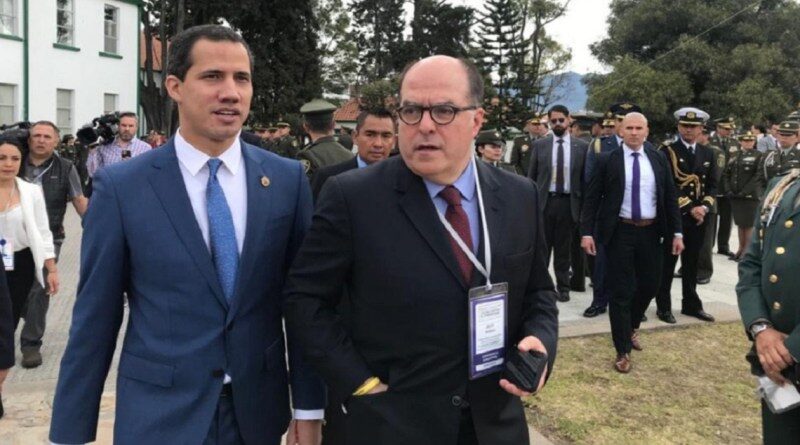 Julio Borges, the founder of Venezuela’s Justice First party (PJ), former parliamentarian, and fugitive from justice, accused former deputy Juan Guaidó and his Popular Will (VP) allies of embezzling assets, and suggested that Monómeros will soon be removed from the list of Venezuelan assets abroad.

It was you, not me
On September 28, during an interview with a journalists who had supported the National Assembly’s actions in 2015, Borges readily offered the opinion that Guaidó, as head of his supposed interim presidency, made poor decisions purportedly for the “protection of funds abroad” and holds, along with his party, the greatest share of the responsibility for the loss of Monómeros.

He said that Guaidó “should have the strength, the assertiveness to plan and propose.” At the same time Borges complained that “in the end we have done it alone,” referring to PJ.

He indicated that the self-proclaimed Guaidó has “surrendered to his inner circle”—in reference to VP—”and he has not made decisions.” In addition, added Borges, “many times he is not even in meetings. And that is why we put (in a statement) that pure and simple name of Juan Guaidó, without title and decorations” as responsible for the Monómeros debacle.

A little bit late
Two days before Borges’ comments, PJ had issued a statement in which it stated that it did not handle Venezuelan assets abroad—although Borges was “foreign minister” in the organizational chart of the false president. Another former PJ parliamentarian, Tomás Guanipa, was until a few weeks ago Venezuela’s  fake ambassador to Colombia, appointed by Guaidó. In this role he dealt with the government of Colombia, which is now about to seize Monómeros.

According to the statement, PJ “for more than a year” reported its “concern for the management of assets and companies of the Republic abroad” and since the self-proclamation “their proposals were not taken into consideration” as they were in “disagreement with the form of management,” which claimed that its “priority is to protect assets from corruption, creditors and put them at the service of Venezuelans.”

It is worth noting that since January, Borges and PJ, perhaps foreseeing that their support would evaporate following the scheming that led to the appropriation of Venezuela’s gold in London, the artless defense of CITGO against the Canadian mining company Crystallex, the seizing of the Simón Bolívar Foundation of CITGO that cost Venezuelan lives, and the actions against PDVSA in Paraguay, and against Monómeros in Colombia, demanded via Twitter “to show the concrete results of the investigations that we have requested, in order to clarify whether there was a transparent management of public funds.”

“It is essential to respond to each case that has created doubts in public opinion and to give access to all the information necessary to clarify the events,” wrote PJ on Twitter in January 2021.

Eight months later, PJ continued to ignore the multi-million dollar corruption plot that had been denounced as early as December 2019 by Humberto Calderón Berti, Guaidó’s envoy to Colombia at the time. This cost Calderón Berti his “position,” and was reiterated last Friday when Calderón Berti lashed out at his former allies, singling out Leopoldo López, another fugitive from Venezuelan justice, for the bankruptcy of Monómeros.

He accused López of the unscrupulous use of the company, under the corruption of the alleged interim presidency, through the management of Carmen Elisa Hernández, appointed by Guaidó as the head of Monómeros.

“What happened in Monómeros is exaggerated, excessive politicization, which is what is happening in CITGO,” Calderón Berti said.

VP wants to share the blame
In response to PJ, former deputy Guaidó and his VP party released a statement in which, among other points, they assured that “decisions related to assets were taken with the participation and agreement of all factions, based on the criteria of representation.” That is, claims VP, all of the so-called G4 coalition participated in the key decisions.

This is what they teach at Harvard's Kennedy School of Govt. Far-right leader Leopoldo López says his political faction has no responsibility for the troubles at Monómeros, points the finger at the current board.Only this corrupt, incompetent board was appointed by Guaidó and co. https://t.co/deTeWM2Thk

“It is precisely participation that guarantees governability in the functions of the interim government,” said Guaidó, so as not to bear the blame alone.

For his part, Leopoldo López placed the blame on the Monómeros board in an attempt to whitewash his responsibility in the appointment of the “board of directors.” According to many analysts, López’s approach can be compared to the president of a country blaming his or her minister for corruption, when that minister was originally appointed by the very same president.

Featured image: Former deputy Guaidó following Julio Borges during an event with Colombian authorities, complicit like them in the looting of Monómeros. File photo courtesy of Caraota DIgital.