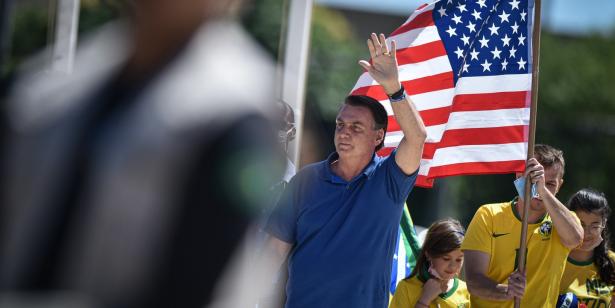 Bolsonaro is increasingly at war with anyone in the government who does not bend their knee to him, stoking fears that Brazil is accelerating its slide toward another dictatorship.

OUT WITH CONGRESS, Supreme Court saboteurs! New anti-communist constitution! Criminalize communism!” read one banner. “Military intervention with Bolsonaro,” read another. A protester waved a sign outside the window of a car: “Weapons for upstanding citizens.” Hundreds of diehard, far-right protesters were gathered on Sunday in Brasília, the capital of Brazil, to rally against the quarantine imposed to slow the spread of the coronavirus and in support of what would amount to a military coup against the legislature and judiciary. Multiple journalists were physically attacked. Among the speakers at the rally was President Jair Bolsonaro himself, who was also present at a similar protest two weeks earlier.

Bolsonaro and his allies have repeatedly insisted that these protests in favor of overthrowing the legislature and undermining the Supreme Court are “spontaneous movements” by average supporters, but the Supreme Court has opened an investigation into who is behind them. Multiple members of Congress aligned with the president are suspected of organizing the events, including Bolsonaro’s sons.

Bolsonaro, who favors reopening the country against the advice of public health experts, is increasingly at war with anyone in the government who does not bend their knee to him, which includes representatives of almost every democratic institution in the country — stoking fears that Brazil is accelerating its slide toward another dictatorship.

Meanwhile, the Federal Police are investigating Bolsonaro and his politician sons for multiple suspected crimes; his former political party has called for his impeachment; his former Justice Minister Sergio Moro gave an eight-hour deposition to investigators alleging that the president politically interfered in law enforcement institutions; the public prosecutor — a recent Bolsonaro appointee — has asked for an investigation into Moro’s allegations against Bolsonaro; Supreme Court ministers have blocked multiple actions he has attempted to take in recent days; and the commander of the army has publicly contradicted his coronavirus denialism. That’s just a sampling of the battles underway. With the deck stacked so high against him, Bolsonaro is not signaling defeat or moderation, but rather that he is willing to go all out on his war against Brazilian democracy.

“I pray to God that we have no problems this week. We have reached the limit. There is no more conversation, from now on we will not only demand, we will make them follow the Constitution. It will be enforced at any price,” Bolsonaro told the admiring crowd in Brasília on Sunday, standing at the entrance of the Planalto presidential palace. Brazilian, American, and Israeli flags flew behind him. Bolsonaro has complained about what he feels is undue interference in his constitutionally mandated executive domain — particularly by the Supreme Court. He later added, “Enough interference. We are not going to allow for any more interference. No more patience.”

Bolsonaro addressed protesters who are explicitly advocating for the overthrow of democratic institutions, which is a crime in Brazil, where a string of military presidents ruled from 1964 to 1985 after a coup backed by the U.S. Bolsonaro and his vice president, retired Gen. Hamilton Mourão, have praised the military dictatorship throughout their careers, but Bolsonaro has gone further to even openly celebrate its widespread use of torture.

Whipped into a fervor at the rally, some of Bolsonaro’s supporters physically assaulted journalists who were covering the protest. Dida Sampaio, a photojournalist for O Estado de S. Paulo newspaper, was pushed to the ground, kicked, and punched by protesters who yelled, “Trash,” “Get out,” and obscenities. Marco Pereira, a driver for the newspaper, had his legs kicked out from under him during the attack, and other journalists were verbally harassed. The incident provoked widespread condemnation from the national journalists’ union, news organizations, and political leaders. Bolsonaro later said he did not witness the attack but denied that his supporters were responsible. “If there was aggression, it was an infiltrator, some crazy person who should be punished,” he said.

A political crisis erupted in Brazil late last month when Moro, the justice minister, resigned. Leaked chats between Moro and Bolsonaro suggested that the president wanted to replace Mauricio Valeixo as head of the Federal Police to halt investigations into presidential allies. Against Moro’s wishes, Bolsonaro fired Valeixo and appointed Alexandre Ramagem, director of Brazil’s intelligence agency, ABIN, and a close friend of his sons. That appointment was blocked by a decision from Supreme Court Minister Alexandre de Moraes before Ramagem could be sworn in. On Monday, Bolsonaro announced that Ramagem’s righthand man, Rolando Souza, would take the position and had him sworn in 20 minutes later. Souza’s first act in office was to replace the superintendent of the Federal Police in Rio de Janeiro, lending credence to Moro’s accusations; Rio de Janeiro is Bolsonaro’s home state and the jurisdiction where multiple investigations into his family are underway.

During the 15 months of the Bolsonaro administration, eight ministers have been fired or resigned — two in the past three weeks. Finance Minister Paulo Guedes was also recently on the defensive after publicly disagreeing with a Bolsonaro-backed economic plan that was put forward by the military. The president and allies are also currently pressuring Culture Minister Regina Duarte to resign.

The president is also reportedly considering the removal of the army’s top general, Edson Leal Pujol, to replace him with a younger and less qualified general named Luiz Eduardo Ramos, a close adviser to Bolsonaro who is reportedly very loyal to him. The news has rankled some in the military and led Ramos to publicly deny that the plan is being considered. Such a move is within his power as president, but would usually entail a serious justification, not purely political considerations. Pujol has put himself at odds with the president by calling the coronavirus pandemic “one of the greatest challenges in our history” and defending social isolation measures to limit its spread.

Separately, a legislative agency responsible for oversight of the executive branch requested an investigation into Bolsonaro for political interference into the military for revoking three decisions that would have increased oversight into weapons and munitions produced in Brazil, which is entirely under the purview of the military.

The day before the protest, Bolsonaro held an unscheduled meeting with top military leaders and the former military men in his cabinet to discuss the current political morass. According to the Folha de S.Paulo newspaper, many of the generals agreed that the court was overstepping its constitutional authority. However, President of the Court José Antonio Dias Toffoli reportedly also felt that some of the rulings issued monocratically by his colleagues crossed the line into “judicial activism.”

Bolsonaro’s defense minister, a retired army general, issued a statement on Monday in which he reiterated the coronavirus’s threat to the population and disavowed attacks on journalists, but signaled that — speaking on behalf of the organizations he oversees — he agrees that the Supreme Court is overstepping its authority. The Armed Forces “consider independence and harmony between the [branches of government] to be essential to the governability of the country,” the statement said.

Brazil is quickly becoming one of the global hot spots of coronavirus infections. On Sunday, Brazil had the third-highest number of new deaths of any country in the world. Official statistics, which are widely understood to be dramatically underreported, show that Brazil has more than 105,000 cases and 7,321 deaths from Covid-19. In São Paulo, black Brazilians are 62 percent more likely to die from the disease than their white peers, a clear measure of the nation’s rampant inequality and government’s failures to address it.

As The Intercept reported, due to flawed certification procedures by federal authorities, 75 percent of Covid-19 tests available in Brazil are unreliable, many of which were even denied approval to be sold in the countries in which they are manufactured. Public health systems in many states are collapsing, and doctors are being forced to ration care. When questioned about the situation last week, Bolsonaro said, “So what? I lament it. What do you want me to do?”

Last month, Bolsonaro fired Health Minister Henrique Mandetta for publicly challenging him on the government’s response to the coronavirus pandemic and replaced him with the more complacent Nelson Teich, a health care executive and doctor. Sen. Kátia Abreu recently said in a press conference that Teich has proven to be “a little lost” in his job. “Where is the general planning?” Abreu remarked. Teich himself has admitted that the country is “navigating blind” in its Covid-19 response and angered public health officials by limiting the already scarce access to data on the public health situation. “The general sentiment is frustration,” said Rui Costa, governor of Bahia state, after a virtual meeting between governors and the new health minister.

Despite being widely criticized for his perceived inaction, Teich was able to push through an illegal measure to block Cuban doctors from returning to Brazil to help prop up collapsing regional health care systems. In 2013, the presidential administration of Dilma Rousseff began to bring in thousands of Cuban doctors to serve communities in the most remote reaches of the country, where it was difficult to attract Brazilian professionals. Bolsonaro, who campaigned heavily against an imaginary communist threat, made clear that he would end the program after he won the presidential election in 2018, so Cuba canceled the contract and recalled its doctors. Some of the Cuban health care professionals stuck around, hoping to be able to continue working in Brazil outside of the intergovernmental program, but the administration has repeatedly blocked them from getting certified for ideological reasons.

“I’m sure of one thing: We have the people on our side, we have the Armed Forces on the side of the people in the name of law, order, democracy, and freedom. And most importantly, we have God with us,” Bolsonaro told supporters Sunday. At least part of the claim is false: The president’s approval rating has dropped to 27 percent, down 24 percentage points since he took office last January. In the coming weeks and months, the Armed Forces and God — usually more abstruse — will have to reveal which side they are on.

Andrew Fishman is a reporter for The Intercept and Managing Editor of The Intercept Brasil.  His work has focused on security, technology, human rights, Brazil, and documents leaked by NSA whistleblower Edward Snowden. Previously, as a freelance journalist and multimedia producer, his work has appeared on NPR, Al Jazeera English, Bloomberg TV, and other outlets.  He lives in Rio de Janeiro, Brazil, and is fluent in Portuguese.

Featured image: Brazil’s President Jair Bolsonaro attends his supporters during a protest in favor of the government and against the lockdown amid the coronavirus outbreak in front of the Planalto Palace in Brasília, Brazil, on May 3, 2020., Photo: Andre Borges/NurPhoto via Getty Images