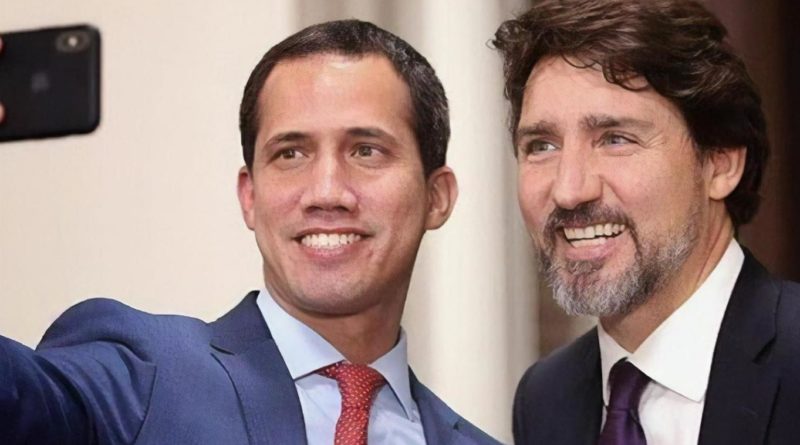 Firstly, let us look at the COVID-19 issue. Under the auspices of Canada, the countries of Peru, Colombia and Brazil are evaluating the impact of the pandemic on the Americas.  As a corollary, the Trudeau Government claims, the impact on Venezuela must be examined.

Perhaps we can help. This chart, adding Ecuador to the countries referenced by Champagne, is based on the reputable Swiss-based scientific agency CDC. It sheds light on the situation. Ecuador is included along with the Champagne list, as they are all Lima Group member states. This group of countries, of which Trudeau was a key founding member back in 2017 and its current top leader, has set the explicit goal of overthrowing the Maduro government. Limited evidence and challenges in attributing cause of death means that the number of confirmed deaths may not be an exact count of the actual total number of deaths from COVID-19.

The graph summarizes information from three dates: Jan 31, 2020; March 1 and April 17. The information is linear. It ranges from level 0 to level 20. The ranking shows how Venezuela has the least cases, while Brazil has the most. The other countries taken into account are Chile, Colombia, Peru and Ecuador in an ascending order. See source below:

The facts show that it is Venezuela that serves as the example in Latin America. Peru, Colombia, Brazil and Ecuador are right-wing dictatorships and thus, by their very nature, incapable or not interested in adopting a humane policy to fight the pandemic.

On the other hand, Venezuela has a Bolivarian Revolutionary government. It is animated by the need to flight COVID-19 and put all its meagre resources, both human and physical, at the service of its population. The resources would be far less meagre if it were not for the crippling sanctions imposed by the US and Canada against Venezuela. Facts, such as the chart show, are stubborn things.

Secondly, it is important to point out that Canada and the other Lima group countries cited in the Canadian governmental tweet (plus Ecuador), have no interest in the well-being of the peoples of Latin America. For these countries and US President Donald Trump, COVID-19 is just a tool. It serves as a weapon, not only to maintain the pre-COVID-19 tempo of the American attempt to recolonize the region with the full collaboration of its allies, but to actually increase this aggressive momentum right in the middle of the pandemic, cynical as that is.

So, what is behind the concern of the Canadian Foreign Minister’s tweet? He mentions the “humanitarian” needs of Venezuelans as the “Venezuela crisis.” The tweet, as we note above, also tags @Jguaido, the so-called Trump/Trudeau interim president. The Canadian government tweet was dated May 4. During the early morning of May 3, a group of heavily armed mainly Colombian mercenaries, accompanied by armed US marines, attempted a maritime incursion into Venezuela. The avowed goal, as these two 2-minute videos show, was to overthrow the legitimate Maduro government, confirming the Maduro government’s view.

However, the attempted coup failed miserably. The invaders were stopped and arrested or killed by the Venezuelan Civic Military-Union and local fishermen. The Trudeau government surely knew about it as the news appeared on May 4 on Canadian state television. In addition, in my May 4 newsletter, I invited my more than 3,500 subscribers to write to Trudeau and Champagne. In the tweet below, Orlando Viera-Blanco, the Trump/Trudeau “fake ambassador” to Canada, triumphantly announced what he thought would be the imminent entry into Caracas of Guaidó as the president and  not interim president. Note the telling explanation mark after “soon”!” There is a precedent to this. On April 29, a week before the attempted invasion, US Secretary of State Mike Pompeo said:

“In Venezuela, I’m pleased to report that the multilateral effort to restore democracy is continuing to build momentum. I’ve asked my team to update our plans to reopen the U.S. Embassy in Caracas so that we are ready to go. As soon as Maduro steps aside, I am confident that we will raise that flag again in Caracas.”

The Trudeau government, which is in lock step with the US on Latin American policy, surely noted that US foreign policy statement.

However, the coup was foiled even before it got off the ground. The Trudeau government is strangely comfortable with these activities, as can be demonstrated by the intimate ties with the Guaidó representative in Canada.

In any case, it is clear that the Canadian government is fine-tuning its plans against Venezuela to match the same Trump COVID-19 policy.

Just like Trump, Trudeau now has to deal with yet another failed coup attempt. In addition, how does Trudeau explain that the Lima Group, of which he is a key member, is supposedly in favour of “a peaceful solution” in Venezuela, rather than military intervention? And yet, the May 3rd action, was a forceful and illegal military incursion on the soil of a sovereign nation.

This is an ongoing story.