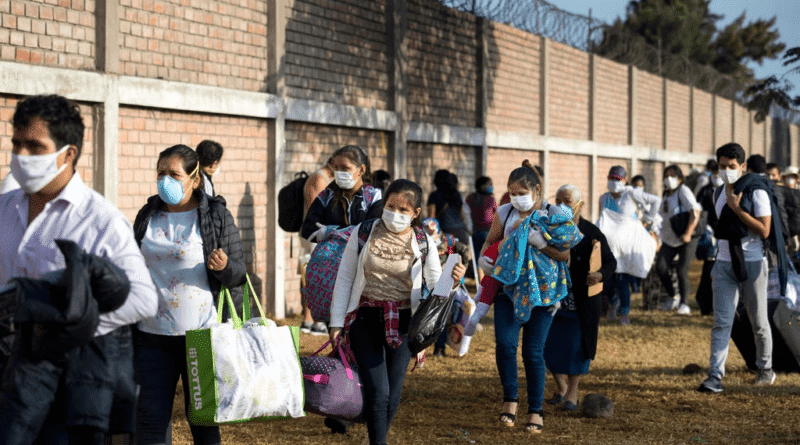 Within the framework of capitalist society, there are segments that take the brunt of it. These are the poorest, or those at the bottom of society, who have no chance of making a profit, which always goes to the ruling class.

This kind of bacteriological warfare that affects the world has brought to light the iniquities of the system and has shown the real face of a structure based on exploitation, exclusion, and the accumulation of wealth in the hands of a few. The pandemic has made it impossible for them to sugarcoat or disguise just how degrading it is.

In Peru, the effects of the Coronavirus have been catastrophic in economic and social terms. The country was never prepared for such a scourge, which explains the improvisation and the difficulties being recorded in dealing with it.

If we wanted to ask ourselves how many people are facing difficulties in the current stage of the crisis, we could write many pages and even they would not be enough to reflect the real drama of it. That is why it is better to talk about segments of society whose activity, in the current conditions, is indispensable; and about others who, even in passivity, constantly suffer the effects of the convulsive scenario that shakes the very foundations of the country that is supposed to shelter us.

We could allude to those who are on the front line today in the fight against Covid-19. They work hard every day, they risk everything – even their own lives – and they do not always receive the treatment they deserve. We are referring to the doctors, the health workers — nurses and hospital workers — the municipal service workers and members of the police and the armed forces. All of them have the right to life, to the protection of their future, to the security of their families and to their own peace of mind. But life has placed them before a dilemma: they choose that, or they risk everything for the common good.

The vast majority of these are Peruvians of humble origin, from modest homes, men and women who have been beaten by abandonment and misery, and who have made a place for themselves in the social process by the dint of study, commitment and willingness to fight. Today they play the role of heroes in the face of an evil that puts many at risk and whose lives they must try to protect and secure.

We have seen them working tirelessly in endless shifts, showing the face of courage, working with self-sacrifice and modesty, smiling in the face of adversity, and facing the situation without resources, and without urgent implements for their protection and safety. On occasion, some of them – especially workers in the hospital area – have been forced to demand attention for themselves, but have not asked for anything that cannot be attended to. No exceptional demand has come to light in their claims, and when we see this, we must consider an irrefutable truth; Peru is one of the countries that invests the least in its health care system and is among those countries that have the fewest doctors, hospital beds, support instruments and ICUs per inhabitant.

In another scenario, and paying heavily from the effects of the quarantine, are the migrants, that is, the poor Peruvians who were inadvertently caught out of their usual place by this unusual storm. Some choose to return to Lima and others to travel to the interior of the country, even on foot. More than 200,000 Peruvians are facing this odyssey. This generates many other challenges: to organize the people, to ensure that they are not infected, nor susceptible to contracting the virus; to receive food, to have shelter during their hours of rest, to suffer as little as possible from the rigors of abandonment, and to be helped by vehicles that are able to transport them. These are men and women, but also children who are suffering the ravages of a truly dramatic reality.

Then there are workers without resources that constitute a third segment. We are talking about the construction workers, who do not have jobs who are not on any payroll; about the street vendors, the independent workers, the taxi drivers. Today we know that 42% of the workers in Peru lost their income. The crisis is devouring them, and they lack their most elementary resource: their labor.

And there is an additional segment that is in crisis today: the prison population. There are 100,000 people crammed into detention centers today that have a combined capacity to hold 35,000. It has been said, and it is true, that 40% of them have not been prosecuted and have not been sentenced. Some may be innocent, and others guilty. Among these there are those responsible for horrendous crimes, but also for minor offenses. And among those sentenced, some received just sentences, and others were victims of excessive punishment unrelated to the crimes with which they were charged. Tribunals presided over by Judges Hinostroza Pariachi and Villa Stein convicted the innocent and released the guilty. If the Judicial Power could arrange for Keiko Fujimori’s freedom from her 15-month sentence for money laundering and corruption now does it really guarantee impartiality and justice? Is it reliable?

It’s easy to say, “If they’re in jail, they’re guilty.” Many Peruvians of singular value were imprisoned. It is not about defending murderers, rapists or hitmen, but there are prisoners who should be out and free. So what it comes down to is a question of protecting those who have no possibility of defending themselves against the virus that is overwhelming the country. They pay for a crisis that “came up from behind”, but that the current authorities have no clue as to how to handle it.

The Coronavirus has put onto the skin of Peruvians an indelible message: solidarity, as a touchstone of the future. We should honor it.