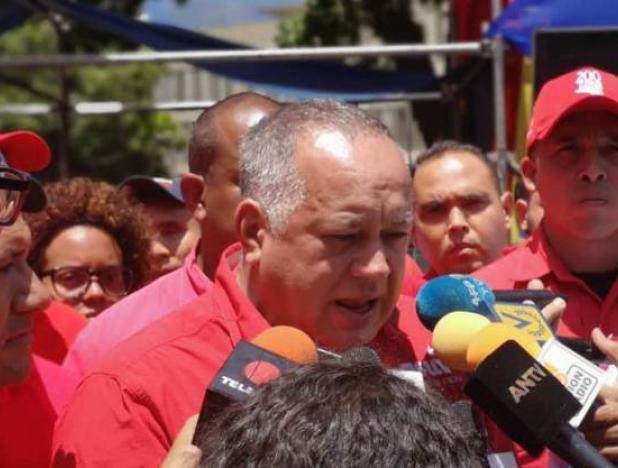 During his participation in the march for the defense of peace that took place this Saturday, the first vice president of the United Socialist Party of Venezuela (PSUV), Diosdado Cabello, stressed that the people of Venezuela are heroic and Nicolás Maduro is leading the battle to fix electricity, water and services.

From the Nueva Granada Avenue (Caracas), Cabello said that the people is mobilized throughout Venezuela, through the Peace Crews and Popular Units of Integral Defense, in all the capitals of each state in the phase of organization, training and production, to defend national sovereignty and reject the imperialist pretensions to intervene in Latin America.

Also, the president of the National Constituent Assembly, said that the Venezuelan opposition has not tried to overthrow President Nicolás Maduro as they did with Comandante Chávez in 2002 because they do not have the support of the people or the Bolivarian National Armed Forces. 17 years ago “the situation was not similar, we let them weaken themselves that was the strategy”.

“While President Nicolás Maduro is at the forefront of calling to recover electricity, water and services, the opposition celebrates because hospitals do not work, because there are no medicines, as if everything bad were a reason for joy”, said Diosdado Cabello.

On the other hand, Diosdado Cabello said that the Dutch government has participated openly in the coup plans against Venezuela, for which reason it rejects the pretensions of introducing the supposed humanitarian aid to Venezuela through its islands.

Finally, he emphasized that US government’s statements and its sanctions seek to continue weakening the people of Venezuela while violating human rights.