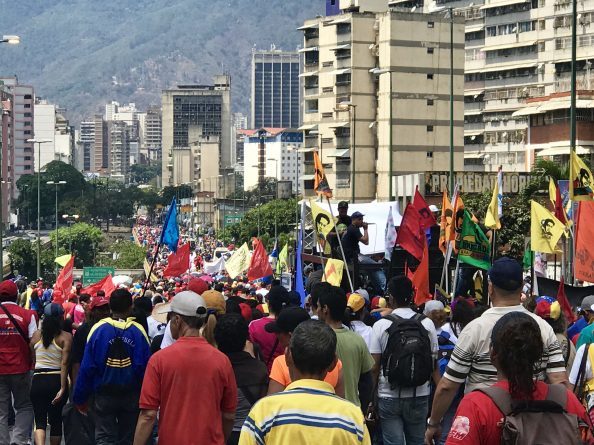 06/Abr/2019.-Today a red tide took Caracas and different cities in Venezuela after the call of the leadership of the Bolivarian Revolution in response to a new D-day launch for the US government through their Venezuelan proxies.

The demonstration ended in front of the Miraflores palace  with a speech by President Nicolas Maduro. He urged the Venezuelans to work harder and harder to defeat the imperial pretensions. From Catia, Av. Nueva Granada and Av. Libertador, 3 marches joined the general demonstration in front the Miraflores Palace.

“I call for national union to defend our country and tell by any means the government of the United States to cease its aggression and sanctions against our country. I call on the workers and the people, in the face of sanctions: more work, more dignity and more effort because Venezuela will succeed and will stand with sanctions or without sanctions,” the president affirmed.

The march is about to start to join the rest of the marches in Miraflores #6Abr #PuebloEnDefensaDeLaRevolución #ConMaduroMeResteo #OperacionLibertad pic.twitter.com/SKstAYpqiU

The images and videos from the opposition demonstration showed what most analysts have been saying in recent weeks: a diminishing number of protesters and a lack of direction in the expectations after the several D-days promoted unsuccessfully by Guaido and the US in order to keep alive their coup d’etat but weakening the resistance of their opposition base and in parallel raising up the Chavista spirit.