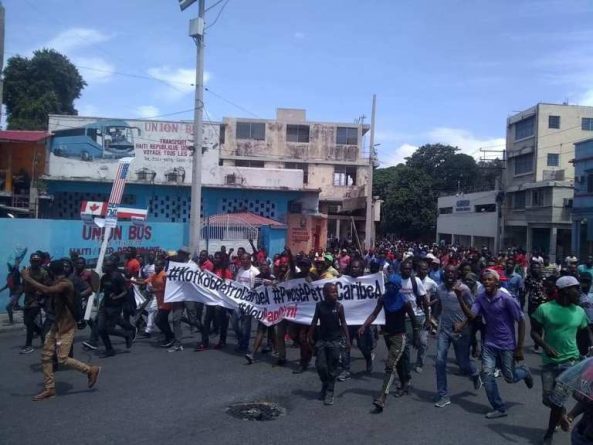 At the front of a protest against Haiti’s president last week a demonstrator carried a large wooden cross bearing the flags of Canada, France and the US. The Haiti Information Project tweeted that protesters “see these three nations as propping up the regime of President Jovenel Moïse. It is also recognition of their role in the 2004 coup.”

Almost entirely ignored by the Canadian media, Haitian protesters regularly criticize Canada. On dozens of occasions since Jean Bertrand Aristide’s government was overthrown in 2004 marchers have held signs criticizing Canadian policy or rallied in front of the Canadian Embassy in Port-au-Prince. For their part, Haiti Progrès and Haiti Liberté newspapers have described Canada as an “occupying force”, “coup supporter” or “imperialist” at least a hundred times.

In the face of months of popular protest, Canada remains hostile to the protesters who represent the impoverished majority. A recent corruption investigation by Haiti’s Superior Court of Auditors and Administrative Disputes has rekindled the movement to oust the Canadian-backed president. The report into the Petrocaribe Fund accuses Moïse’s companies of swindling $2 million of public money. Two billion dollars from a discounted oil program set up by Venezuela was pilfered under the presidency of Moïse’s mentor Michel Martelly.

Since last summer there have been numerous protests, including a weeklong general strike in February, demanding accountability for public funds. Port-au-Prince was again paralyzed during much of last week. In fact, the only reason Moïse — whose electoral legitimacy is paper thin — is hanging on is because of support from the so-called “Core Group” of “Friends of Haiti”.

Comprising the ambassadors of Canada, France, Brazil, Germany and the US, as well as representatives of Spain, EU and OAS, the “Core Group” released another statement effectively backing Moise. The brief declaration called for “a broad national debate, without preconditions”, which is a position Canadian officials have expressed repeatedly in recent weeks. (The contrast with Canada’s position regarding Venezuela’s president reveals a stunning hypocrisy.) But, the opposition has explicitly rejected negotiating with Moïse since it effectively amounts to abandoning protest and bargaining with a corrupt and illegitimate president few in Haiti back.

In another indication of the “Core Group’s” political orientation, their May 30 statement “condemned the acts of degradation committed against the Senate.” Early that day a handful of opposition senators dragged out some furniture and placed it on the lawn of Parliament in a bid to block the ratification of the interim prime minister. Canada’s Ambassador André Frenette also tweeted that “Canada condemns the acts of vandalism in the Senate this morning. This deplorable event goes against democratic principles.” But, Frenette and the “Core Group” didn’t tweet or release a statement about the recent murder of journalist Pétion Rospide, who’d been reporting on corruption and police violence. Nor did they mention the commission that found Moïse responsible for stealing public funds or the recent UN report confirming government involvement in a terrible massacre in the Port-au-Prince neighborhood of La Saline in mid-November. Recent Canadian and “Core Group” statements completely ignore Moise’s electoral illegitimacy and downplay the enormity of the corruption and violence against protesters.

Worse still, Canadian officials regularly promote and applaud a police force that has been responsible for many abuses. As I detailed in a November story headlined “Canada backs Haitian government, even as police force kills demonstrators”, Frenette attended a half dozen Haitian police events in his first year as ambassador. Canadian officials continue to attend police ceremonies, including one in March, and offer financial and technical support to the police. Much to the delight of the country’s über class-conscious elite, Ottawa has taken the lead in strengthening the repressive arm of the Haitian state since Aristide’s ouster.

On Wednesday Frenette tweeted, “one of the best parts of my job is attending medal ceremonies for Canadian police officers who are known for their excellent work with the UN police contingent in Haiti.” RCMP officer Serge Therriault leads the 1,200-person police component of the Mission des Nations unies pour l’appui à la Justice en Haïti (MINUJUSTH).

At the end of May Canada’s ambassador to the UN Marc-André Blanchard led a United Nations Economic and Social Council delegation to Haiti. Upon his return to New York he proposed creating a “robust” mission to continue MINUJUSTH’s work after its planned conclusion in mid-October. Canadian officials are leading the push to extend the 15-year old UN occupation that took over from the US, French and Canadian troops that overthrew Aristide’s government and was responsible for introducing cholera to the country, which has killed over 10,000.

While Haitians regularly challenge Canadian policy, few in this country raise objections. In response to US Congresswoman Ilhan Omar’s recent expression of solidarity with Haitian protesters, Jean Saint-Vil put out a call titled “OH CANADA, TIME TO BE WOKE LIKE ILHAN OMAR & MAXINE WATERS!” The Haitian Canadian activist wrote: “While, in Canada, the black population is taken for granted by major political parties who make no effort to adjust Canadian Foreign policies towards African nations, Haiti and other African-populated nations of the Caribbean, where the Euro-Americans topple democratically-elected leaders, help set up corrupt narco regimes that are friendly to corrupt Canadian mining companies that go wild, exploiting the most impoverished and blackest among us, destroying our environments in full impunity… In the US, some powerful voices have arisen to counter the mainstream covert and/or overt white supremacist agenda. Time for REAL CHANGE in Canada! The Wine & Cheese sessions must end! We eagerly await the statements of Canadian party leaders about the much needed change in Canadian Policy towards Haiti. You will have to deserve our votes, this time around folks!”

Unfortunately, Canadian foreign policymakers — the Liberal party in particular — have co-opted/pacified most prominent black voices on Haiti and other international issues. On Monday famed Haitian-Canadian novelist Dany Laferrière attended a reception at the ambassador’s residence in Port-au-Prince while the head of Montréal’s Maison d’Haïti, Marjorie Villefranche, says nary a word about Canadian imperialism in Haiti. A little discussed reason Paul Martin’s government appointed Michaëlle Jean Governor General in September 2005 was to dampen growing opposition to Canada’s coup policy among working class Haitian-Montrealers.

Outside the Haitian community Liberal-aligned groups have also offered little solidarity. A look at the Federation of Black Canadians website and statements uncovers nothing about Canada undermining a country that dealt a massive blow to slavery and white supremacy. (Members of the group’s steering committee recently found time, however, to meet with and then attend a gala put on by the anti-Palestinian Centre for Israel and Jewish Affairs.)

A few months ago, Saint-Vil proposed creating a Canadian equivalent to the venerable Washington, D.C. based TransAfrica, which confronts US policy in Africa and the Caribbean. A look at Canadian policy from the Congo to Venezuela, Burkina Faso to Tanzania, suggests the need is great. Anyone seeking to amplify the voices from the streets of Port-au-Prince should support such an initiative.