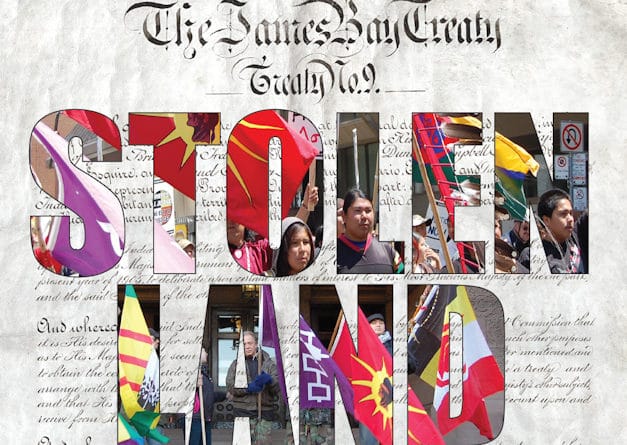 On December 31, the BC Supreme Court ruled in favour of Coastal GasLink (CGL), which has never obtained consent from the Wet’suwet’en Hereditary Chiefs to work on un-surrendered traditional Indigenous territories in the north-central part of the province, east of Prince Rupert.

For years, CGL has pursued its pipeline construction plans, destroying archaeological and cultural sites, while private security firms and the RCMP interfere with the constitutional rights of Wet’suwet’en people to access their lands for hunting, trapping, and ceremonies. CGL has frequently violated the conditions of its permits, without facing penalties from Canadian regulatory authorities.

In January 2019, the RCMP arrested a number of Indigenous land defenders and allies at the Unist’ot’en camp, which was set up in 2010 to block access to Wet’suwet’en territory by resource extraction industries. Recent news reports based on RCMP files reveal that the Mounties were prepared to use extreme violence to carry out these arrests.

This story is nothing new in Canadian history. Most of the land and water within the borders of Canada were forcibly taken from the original inhabitants, with catastrophic consequences. Over the last few decades, increasingly detailed evidence has emerged about the scope of this enormous land theft, and the duplicitous efforts to justify the genocidal policies of the European colonizing powers and the modern Canadian capitalist state.

The latest study of this history comes from the Yellowhead Institute, “a First Nation-led think tank rooted in community networks and committed to Indigenous self-determination.” In October 2019, the institute published “Land Back,” a Red Paper which builds on the tradition of “agenda-making reports by Indigenous people” like the famous 1970 response to the “White Paper” assimilation project launched by Pierre Trudeau’s federal Liberal government. The massive rejection of the White Paper helped build the “Red Power” movement which energized Indigenous resistance struggles during the 1970s and beyond.

“Land Back” is an invaluable tool for understanding these issues from an anti-capitalist perspective, written mainly in language which is clear and accessible, and free from academic terminology that sometimes limits a wider readership.

As the executive summary of “Land Back” points out, “one of the loudest and most frequent demands of Indigenous people in the relationship with settlers is for the return of the land.” For non-Indigenous residents of Canada, mostly raised with the (mistaken) collective belief that Indigenous lands were “surrendered,” however unfairly, this demand has often seemed puzzling. Thus, we see generations of “progressive” politicians who promote their visions of “reconciliation,” including Royal Commissions, apologies for the residential schools, court cases, negotiation tables, impact benefit agreements, etc. From their perspective, the persistent attempts by Indigenous activists to assert rights and jurisdiction outside of reserve or settlement boundaries, at the expense of corporate extraction projects, are seen as utopian or simply annoying.

This sentiment was skewered over half a century ago by Buffy Sainte-Marie, in her song Now That the Buffalo’s Gone, with the lines “Oh it’s all in the past you can say, but it’s still going on here today.”

“Land Back” grounds this attitude in the “stubborn insistence by Canada, the provinces and territories, that they own the land. For many Indigenous communities, this is a deep violation of their consent to determine what happens on un-surrendered lands, but also a violation of the broader assertion that they have jurisdiction over those lands.”

There is now a welcome trend towards deeper understanding of this question. For example, many Canadians today realize that most of British Columbia was never the subject of treaties. The recent publication of “No Surrender,” an important study of the negotiations during the 1870s leading to the “numbered treaties” in western Canada, is a powerful antidote to the false concept that Indigenous peoples “gave up” their territories.

The Red Paper provides fascinating details on the land and resource strategies of federal and provincial governments, posing broad but crucial questions about the nature of “consent” practiced by Canada, especially the strategies for dispossessing Indigenous peoples of lands and waters. The Paper helps readers to beyond debates over immediate struggles, towards a deeper perception of the big picture. Importantly, “Land Back” stresses that “alienation is not simply a process of straight theft because it often requires the compliance of First Nation governments. Colonization has transformed internal social relationships and governance systems through the cumulative impacts of assimilation.” The Paper also warns that “land and water alienation must also be understood through gender dynamics,” since “Women, transgender, queer, and Two-Spirit people were never the intended beneficiaries of new distributions of power introduced through colonization. Rather, they were targeted and disempowered with the intention of removing them from leadership and minimizing any confrontation or challenge they posed to the patriarchy of Western systems of governance.”

Many other valuable insights are presented, including analysis of “new strategies to manage Aboriginal rights.” These days, governments increasingly seek to download their responsibilities, especially the duty to consult, to the private sector, through the encouragement of bilateral commercial contracts with resource companies. “Impact and Benefit Agreements” (IBAs) are private commercial contracts negotiated between Indigenous peoples and industry in the consultation phase of a project. Such private agreements can imply recognition of Indigenous authority, and the right to benefit from economic activity on their territories. But the Red Paper raises serious concerns: “While certainly not embracing a frozen-rights approach to Indigenous culture, recognizing the importance of First Nation participation in the market economy, and trying to avoid any form of essentialism, we press the question: can capitalism coexist with decolonization?”

“Beneficial” energy projects like hydroelectricity and transmission lines, for example, often negatively impact First Nations and their land and waters.

“Land Back” examines the changing nature of Indigenous resistance as laws began to change. After the Canadian Constitution was patriated in 1982, the new Section 35 declared that “the existing aboriginal and treaty rights of the aboriginal peoples of Canada are hereby recognized and affirmed.” Many First Nations rejected this as a subordination of their rights under Canadian federalism, while others sought to leverage this new tool. Although governments have done little to make this declaration a reality, the courts have slowly elaborated on the definition of Section 35 rights. “Land Back” gives an overview of this process, including an explanation of new legal categories: “Aboriginal rights,” “Treaty rights” and “Aboriginal title.”

However, as the Red Paper points out, no “veto” power has ever been established by Canadian courts, although the Tŝilhqot’in decision “introduced a higher threshold of consent for development on Aboriginal title lands.”

That brings the authors to a review of the United Nations Declaration on the Rights of Indigenous Peoples (UNDRIP), which contains clauses ensuring Indigenous people’s right to free, prior, and informed consent (FPIC), tied to a universal human right to self-determination. “Land Back” traces the tactics of both Conservative and Liberal governments to restrict the application of UNDRIP clauses, or to falsely claim that Canada is “already implementing” these rights. In July 2017, Canada published its “Principles Respecting the Government of Canada’s Relationship with Indigenous Peoples,” consisting of ten commitments for the new nation-to-nation relationship promised by PM Justin Trudeau.

This document states that “any infringement of Aboriginal or treaty rights requires justification in accordance with the highest standards established by the Canadian courts.” In other words, while Canada recognizes UNDRIP, it does not guarantee adherence to the Declaration’s concept of “free, prior and informed consent.”

The Red Paper warns that “the life of our species and of the planet are at risk from the type of economic philosophy and practices perpetuated by capitalism and settler colonialism…. In May 2019, the UN’s Global Assessment Report on Biodiversity and Ecosystem Services found that human activities are rapidly stripping the planet of biodiversity, contributing to the ecological devastation wrought by climate change. One million species are at risk of extinction. While an apocalyptic future certainly awaits without transformational change, the UN report finds some hope in the land management practices of Indigenous peoples globally.”

Read “Land Back” for yourself here.