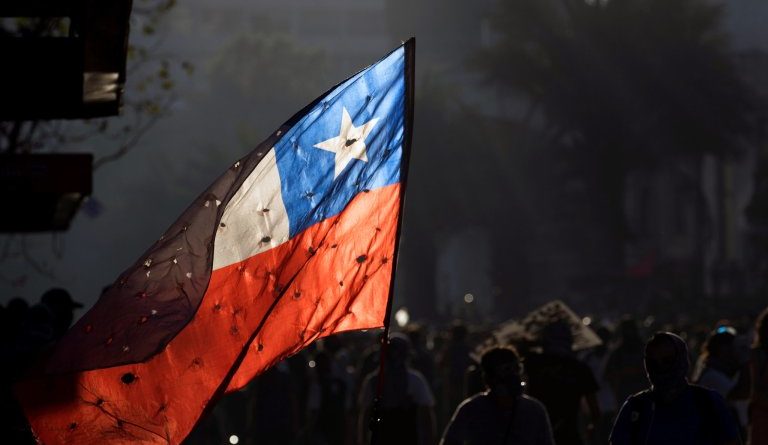 The mirage of Chile’s economic model and its neoliberal way of life collapsed. Only in our minds, so far. In our conscience, all its legitimacy has been lost. We finally assumed, transversely and from all social classes, that it is deeply immoral and that it must be overcome.

So far, the Chilean people have won a very important first battle—the cultural battle. Without this, any concrete change demanded by this society could not be started. The first great step to change things is understanding that they must be changed. And this already happened through a great outbreak in which people said, that’s enough. From then on, a tacit—but also explicit—consensus was reached about building a superior social contract through which collective rights and patrimony are not commodified. In this connection, all surveys conducted after October 18 show that over 80 percent of the population support the drafting of a new Constitution and that they are demanding structural changes to make social demands a reality.

Though it may sound premature, we could affirm that neoliberalism’s cultural hegemony was defeated in the world’s most neoliberal country. The Chilean stage proposed since 1973 as a free market pilot project by Milton Friedman and his Chicago School collapsed due to its own asymmetries and oppressions. This takes us to a historical crossroad: a new national reestablishment or the continuity of a model (just as it is now or disguised).

October 18, 2019 will go down in history as the beginning of a telluric social movement aimed at ending the neoliberal era started when Salvador Allende was toppled; an era that bloodily imposed a trans-nationalization of our entire economy together with the systematized looting of our “red metal”—copper—and all remaining natural resources, the shared assets of us all.

Therefore, the most grotesque theft of this neoliberal period was denationalizing our copper, as well as privatizing water and our pensions funds. Looting on a grand scale.

The abandonment of Chile’s industrialization —destroyed when copper production was privatized—is also part of this deeply colonial centralizing scheme, leaving us in a primary economic development model, exporting raw material without added value just as it is demanded in the world-system’s international distribution of labor.

In an attempt to explain the policy of the looting of the Chilean people, let’s only quote the fact that between 2005 – 2014 alone, large private copper companies took $114 billion. This is to say, an average $ 11.4 billion per year, equivalent to 23.3 percent of the public spending during that term. These are minimum estimations. Some say copper mining revenues are close to $ 40 billion per year. Only a small percentage of it goes to the State; this is to say, almost all of it goes to the pockets of a few. It is a brutal theft with the permissiveness and connivance of every government in turn after the Augusto Pinochet dictatorship.

According to minimal estimations for 2018, about $ 13.7 billion dollars fled the country—equivalent to almost 20 percent of the total national budget that same year. The pyrrhic “social agenda” announced by President Sebastian Piñera to put down the social unrest and to give (an insufficient and disorganized) answer to the urgent social demands was estimated at about $ 1.5 billion. This would be only 10.9 percent of the amount taken abroad by large private mining companies.

In the face of this situation, the October 18th social unrest and ongoing rebellion paves the way for us towards a necessary process of national reorganization. A constituent process that began from the roots, in all territories and in almost every social sector. Encounter, debate, collective and direct action began together with a battle for a real sovereign constituent assembly that represents the interests of the majorities.

This necessary reorganization will bring new cultural paradigms and coexistence, among us and with nature, of which we are part. We’ll have to tackle transforming production and consumption patterns that help us alleviate and then overcome the environmental catastrophe we are inheriting due to this economic model.

An essential part of this reestablishment must be recovering crucial common goods, among them water as a basic and inalienable human right. After that, nationalizing copper and lithium again. With the collective and public control of these natural resources, we would have the necessary means to move towards a sustainable economic model, making a rational use of these highly important prized resources, granting added value and investing in research and technological development.

For Chile, this decade began on the October rebellion and the incomparable strength of a people rising up. Many have left their lives and their blood in the streets for this. Other thousands are imprisoned, while torturers, murderers, rapists are free and protected.

A Chile determined to change is crying bloody tears.

Powerful groups are opposing structural changes demanded by the large majorities and they are using the public force of Chile’s Carabineros for it. This public force, a disgrace to the country, has betrayed its people, becoming mercenaries and watchdogs for the neoliberal model. This is just the beginning.