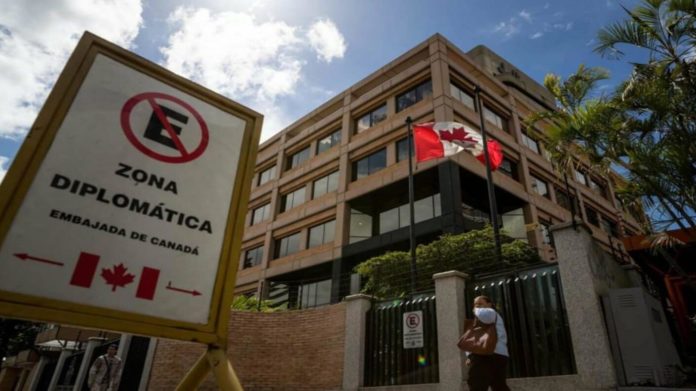 With a fresh act of interference in the internal affairs of the Bolivarian Republic of Venezuela, the Canadian government launched impertinent accusations against the South American nation through the official Twitter account of the Canadian embassy in the city of Caracas.

In a message posted on Twitter, the diplomatic mission of Canada not only took the liberty of requesting that the Mexico Talks between Venezuela and its opposition resume, but it also spoke out in defense of former deputy Juan Guaidó, and referred to the legitimate presidency of Venezuela as a “regime.”

RELATED CONTENT: When will Canada Admit its Venezuela Coup Failed?

In this way, Canada reiterated its position of ignoring the legitimate and constitutional government of the Venezuelan head of state, Nicolás Maduro, despite the fact that Venezuelan authorities maintain respect for the Canadian delegation, within the framework of peaceful Bolivarian diplomacy. Canada’s statements constitute a clear breach of the Vienna Convention on Diplomatic Relations that precisely forbids foreign diplomats’ involvement in the internal affairs of the host country.

On the other hand, Canada’s spokesperson qualified as “threats” the call recently issued by the Venezuelan government, before Venezuela’s Supreme Court of Justice (TSJ), for the competent institutions to combat impunity and bring the full weight of the law down on those who promote the economic blockade and “sanctions” against the nation.

RELATED CONTENT: How Canada Propped Up the Honduran Narco-Regime

Imperialist Canada
Canada is one of the few countries that maintains total adherence to the imperialist policy imposed by the United States government against the Bolivarian Republic of Venezuela. For this reason, Canada insists on repeated attacks against the person of the Venezuelan head of state, Nicolás Maduro, in clear violation of international law.

At the beginning of 2022, the administration of Canadian Prime Minister Justin Trudeau declared its support for the announcement made by former deputy Juan Guaidó, in which Guaidó declared that he would extend the pretense of acting as Venezuela’s “interim government.” Washington uses this falsehood in order to justify its seizure of assets and resources from the Venezuelan state and its people.

Similarly, in line with its policy of interference, the Canadian government supported the diplomatic attacks of the so-called Lima Group, an extreme right-wing organization that has been weakened in recent months with the arrival of left-leaning leaders in various nations in the region. In fact, the host nation of the group, Peru, re-established diplomatic relations with President Maduro’s administration last October, signaling a virtual end to the Lima Group.