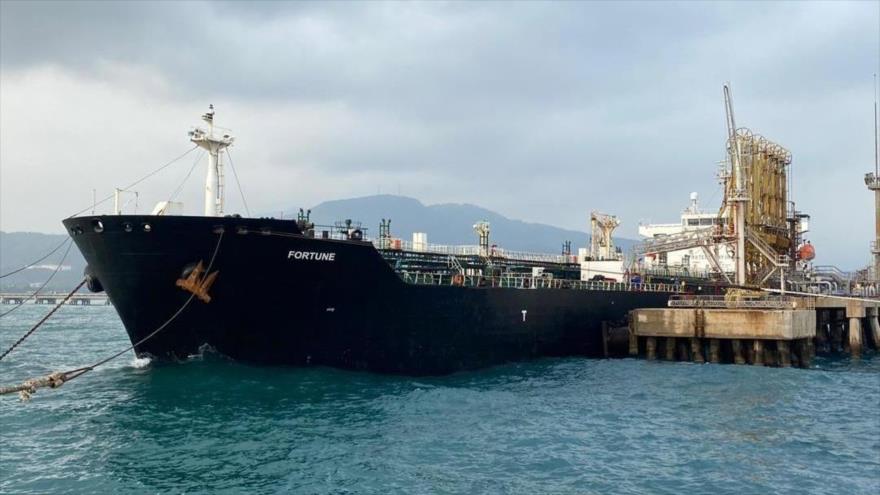 The Iranian fuel tanker Fortune after docking in Puerto Cabello in Venezuela, May 26, 2020. Photo: Getty Images.

An Iranian supertanker with around two million barrels of condensate will begin unloading this week at a port in Venezuela, a document indicates.

The Iranian tanker, with a cargo of two million barrels of the hydrocarbon product needed to dilute Venezuelan extra-heavy crude, arrived on Friday, January 28, at the José port of the state-owned company Petróleos de Venezuela (PDVSA), and will unload during this week, according to a TankerTrackers document, a company specialized in tracking maritime movement in the oil trade.

The vessel was identified as Starla and belongs to the National Iranian Oil Company (NIOC), detailed the report, published on Monday, citing a person familiar with the matter.

As part of the terms of the swap between the two oil-producing countries, the delivery of Iranian condensate—essentially a light crude oil—was expected in December 2021, but the lack of oil storage and bottlenecks in the port of José caused delays, according to internal PDVSA documents.

The tanker arrived in Venezuelan waters after PDVSA and NIOC entered into an agreement to exchange Iranian condensate for heavy crude from the Venezuelan company in the second half of 2021. In fact, the pact has proven to be key to sustaining Venezuela’s oil production, which needs diluents, including condensate, to facilitate transportation and exports of oil.

Last year, the two state-owned companies, which are under illegal US “sanctions,” exchanged some 4.82 million barrels of Iranian condensate for 5.55 million barrels of Venezuelan heavy crude, mostly transported on vessels bearing the Persian country’s flag.

The allies have also swapped Iranian gasoline for Venezuelan jet fuel through a deal that began in 2020, helping ease motor fuel shortages in the South American nation. The maneuver is one of many that has successfully countered US imperialist plots to oust President Nicolás Maduro.

In this way, the supply of condensate from Iran, one of the major producers and exporters of crude oil, can help Venezuela to increase its crude exports. Venezuela needs this revenue to improve an economy that has suffered due to illegal unilateral coercive measures (euphemistically called “sanctions”) by Washington, but has shown significant indications of recovery, particularly since the second half of 2021.