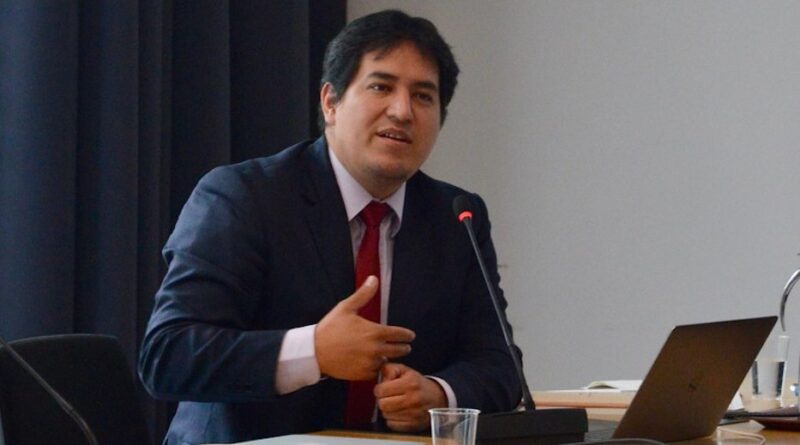 December 17, 2020.- With less than two months to go before the presidential elections in Ecuador, a survey published by the Latin American Strategic Center for Geopolitics (Celag) gives a victory by a wide margin to the candidate supported by former President Rafael Correa; Andrés Arauz who is an economist and a former minister in his government who is now leading the presidential ticket for “the Union for Hope” (Unión Por La Esperanza, UNES) coalition.

The young economist leads in the electoral polls with 36.5 percent of the voters who responded, followed by businessman Alvaro Noboa with 22.9 percent and Yaku Perez, candidate of the indigenous party Packakutik with 21.2 percent, while the banker from Guayaquil, Guillermo Lasso, is around 13.6 percent.

For her part, Ximena Peña, candidate for the list endorsed by President Lenín Moreno, has a voting intention of just 1.2 percent. The data coincides in general with the latest polls, although a high number of undecided voters is projected at this time. The candidate preferred by Ecuadorian voters needs more than 40 percent of the votes and a ten percent advantage over the second place finisher to win in the first round, a scenario that so far does not seem to be certain for Arauz.

Celag’s study, based on three thousand face-to-face interviews conducted throughout the country, also highlights citizens’ perceptions of Ecuador’s political and economic situation. The majority of those surveyed show serious problems with employment and debt in order to weather the crisis. Faced with this context, Arauz proposes a strong monetary injection to lift the ailing Ecuadorian market.

When asked for an overall evaluation of the previous government’s performance, 47 percent of those surveyed considered that Rafael Correa’s performance as President of Ecuador was good. Thirty-five percent considered it to be fair and the remaining 14 percent considered it to be bad. In terms of daily life, crime and the sale and consumption of drugs are the two issues that are the biggest concern for Ecuadorians who identify as living on the neighborhood level.

When asked about goals they wanted to achieve in the near future, 45 percent of respondents mentioned they hope to able to pay off their debts. This figure shows the impact that the economic crisis is having on the country and is related to the level of debt being carried by the population surveyed by Celag in July 2020. At that time, 48 percent said they had had to resort to loans to be able to make ends meet.

Arauz, echoed the difficulties the Ecuadorian people are going through and proposed to recover the “family economy” last Monday in an event with militants by promising to “give a thousand dollars to a million families in the first week” of his government in view of the “abandonment suffered during this pandemic”. The candidate also mentioned that he intends to create “800 thousand jobs in the first three years of government”.

Arauz, who only last week saw his candidacy validated, is part, together with journalist Carlos Rabascall, of one of the sixteen tickets approved so far to compete for the presidency and vice presidency of the country next February 7th, in an election that the current president, Lenín Moreno, is not running for.