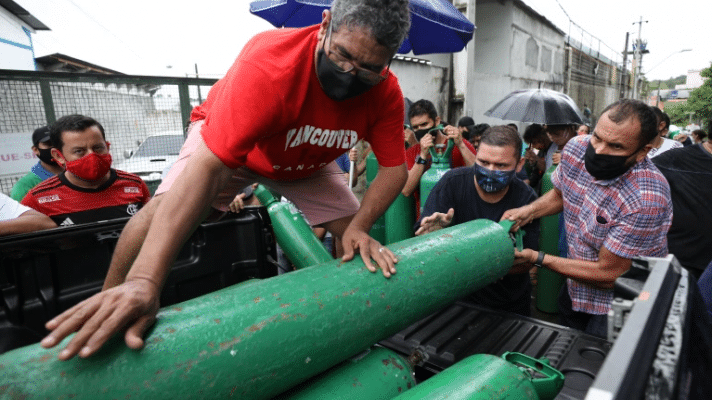 The governor of the state of Amazonas, Brazil, has thanked the Venezuelan authorities for their willingness to help the Brazilian city of Manaus with oxygen to treat patients with COVID-19 and reduce the risk of death.

“On the instructions of President Nicolás Maduro, we spoke with the governor of the state of Amazonas, Brazil, to immediately put at his disposal the necessary oxygen to attend the health contingency in Manaus. Latin American solidarity above all!”, wrote the Venezuelan top diplomat.

Brazilian authorities went into emergency when, on Thursday morning, hospitals in Manaus faced shortage in oxygen supply due to a sudden increase in the number of patients suffering from COVID-19 requiring mechanical ventilation. Hospitals reached their maximum capacity with more than 2,000 patients admitted with COVID symptoms. Since then, in order to meet the demand, the Brazilian air force has been evacuating patients out of the city who still need oxygen.

The pandemic situation in Brazil has worsened especially in Amazonas, where Manaus is located near the Venezuelan border. Manaus was one of the Latin American cities most affected during the first wave of the pandemic, when on average 142 persons were buried every day.

Financial Times quoted Robson Amorim, a doctor from Manaus, who said that the city, surrounded by a tropical forest, is “like an island that can only be reached by boat or plane,” which has made the work of health personnel very difficult during the emergency.

However, the lack of interest—and on many occasions opposition—shown by the government of Jair Bolsonaro in adopting preventive measures to fight the pandemic is also a major cause in the deterioration of the health situation for Brazilians. With 200 thousand deaths and 8.3 million infections, Brazil continues to remain among the three countries worst affected by the pandemic.

“Bolsonaro wants to turn entire Brazil into a giant Manaus,” left-wing politician Marcelo Freixo tweeted. “Our choice now is impeachment (of the president) or more death.”